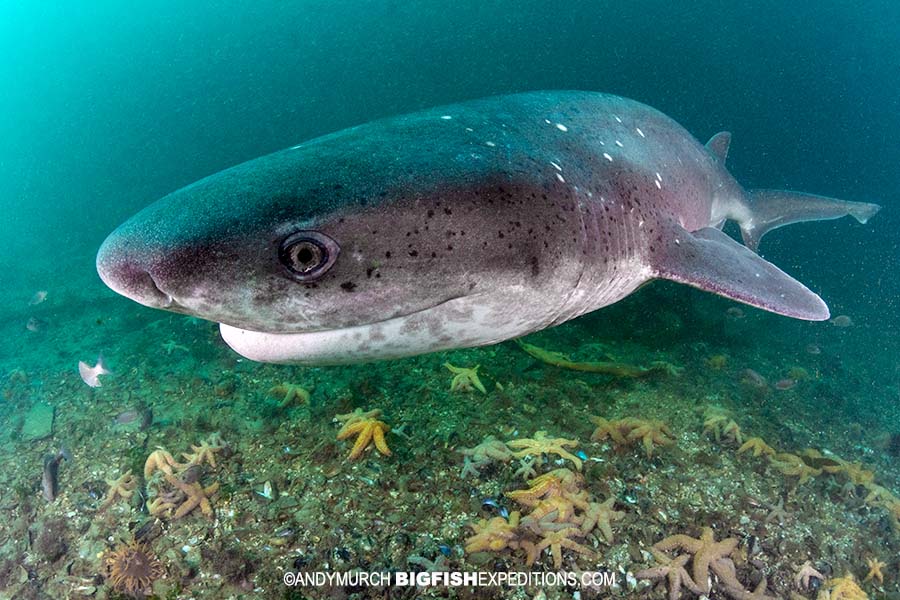 The week started with a windy day so we did our terrestrial game drive at Aquila Game Reserve on day one while we waited for the wind to abate. Aquila is a nice little park a couple of hours inland. During the game drive we saw all of the animals we expected to find including white rhinos, cape buffalos, lions, hippos, burchell’s zebras, blue wildebeest, springbok, eland, giraffe, black-backed jackals and a few other African endemics. 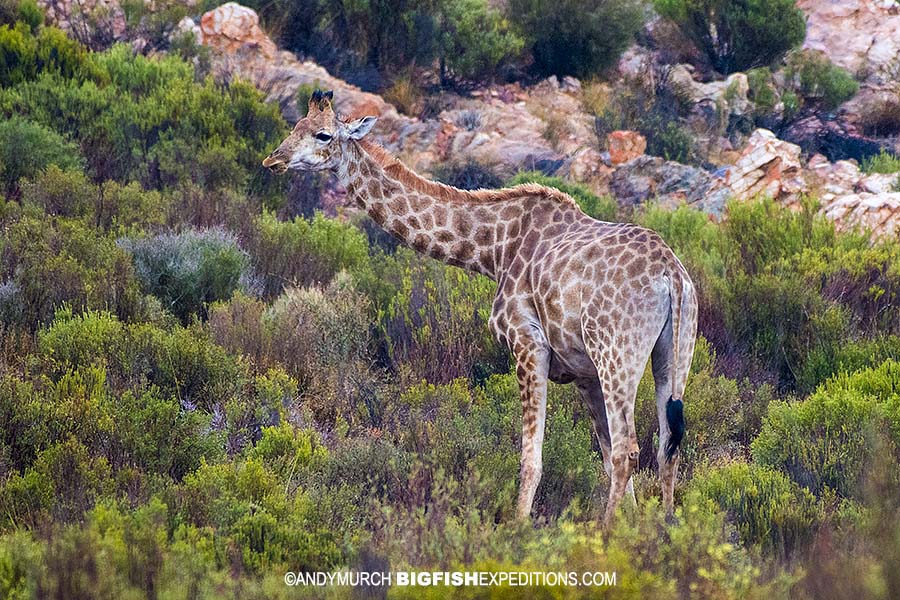 On day two, the winds abated and we were about to head out to sea. Our first dive was at Ark Rock where we saw all of the catshark species that we were hoping to. The vis was low after the wind but shooting sharks on False Bay’s colourful reefs yielded some good photo opportunities. At Ark Rock, Pyjama Catsharks and Leopard Catsharks were particularly abundant.

Last year we had trouble finding sevengill sharks but I am happy to report that they have returned to False Bay. On our second dive we dive near the yacht marina and came across four beefy sevengills. Great to see these permanently smiling cow sharks again! 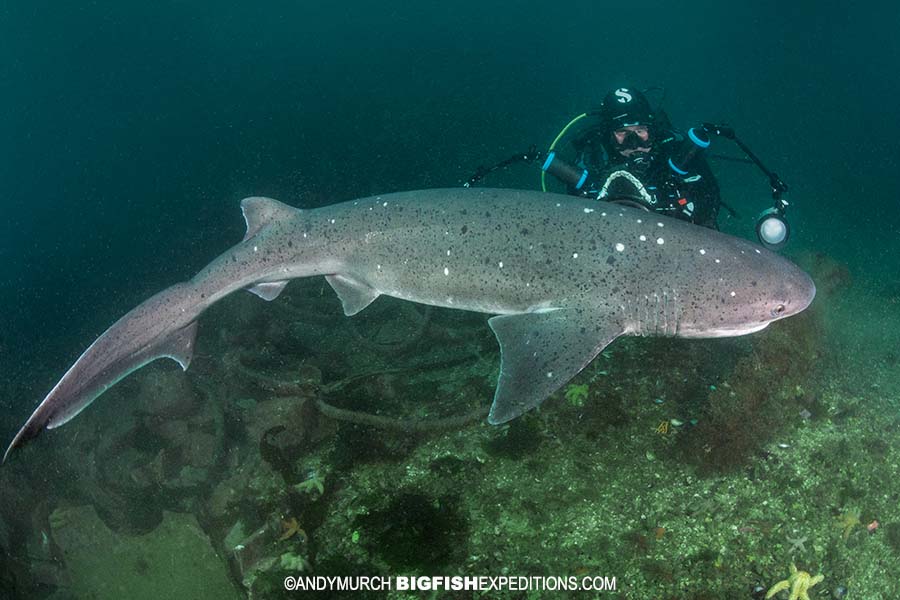 The next day we tried for white sharks out at Seal Island. Unfortunately, there are were two orcas in the area that have been predating on sharks so the white sharks did not show. After a few hours of chumming, we returned to Simonstown for lunch and then headed back out to photograph more sharks on the reefs. This time I concentrated on Puffadder Shysharks and Dark Shysharks; False Bay’s smallest resident sharks. 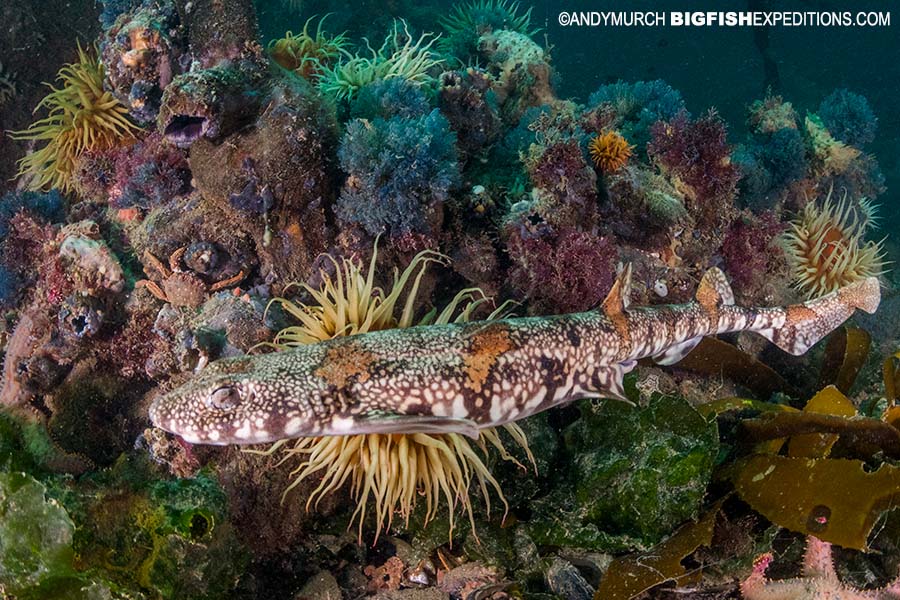 The next morning the wind picked up again so we went hiking in Cape Point National Park where South Africa’s dramatic coastline plunges into the Atlantic Ocean.
The following day, conditions were back to normal so we dove at a Cape Fur Seal colony at Partridge Point. The seals are always ready to play. 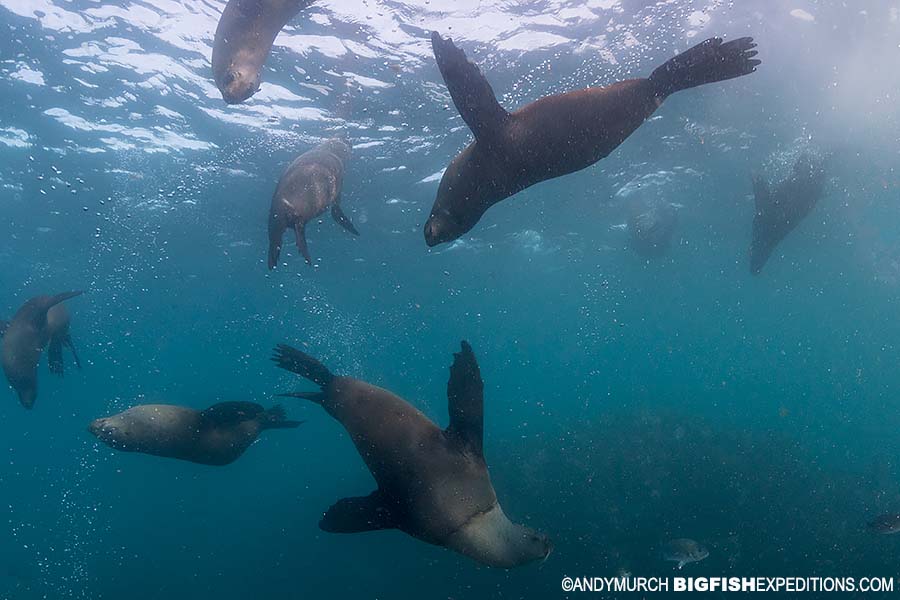 After photographing seals for a while, I went exploring in deeper water where I found lots more catsharks and a few catshark egg cases attached to the corals; signs that the next generation of False Bay’s catsharks are alive and well! 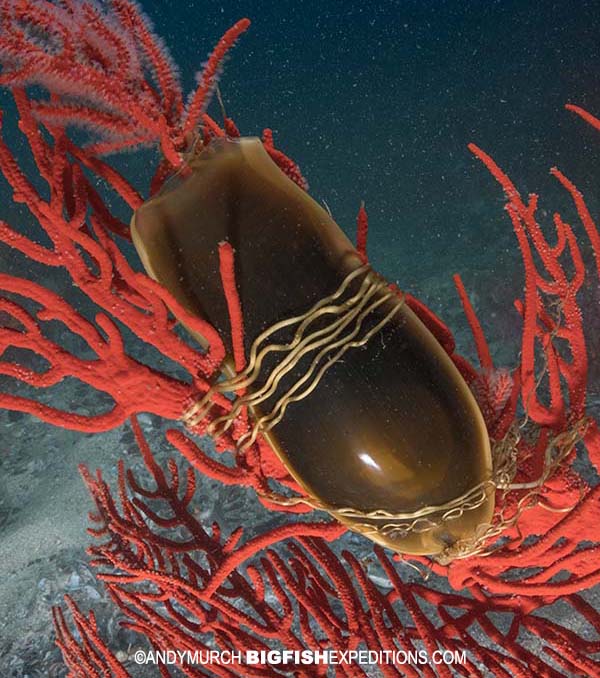 After the seals we went back to see the sevengills again. As before, there were a handful of sevengills but these ones were clearly different. On the first sevengill dive we found one that was almost 3m long. This time, one of the sharks was a tiny juvenile barely a meter long. The cute juvenile was completely fearless and swum around the divers while we photographed it from every angle. 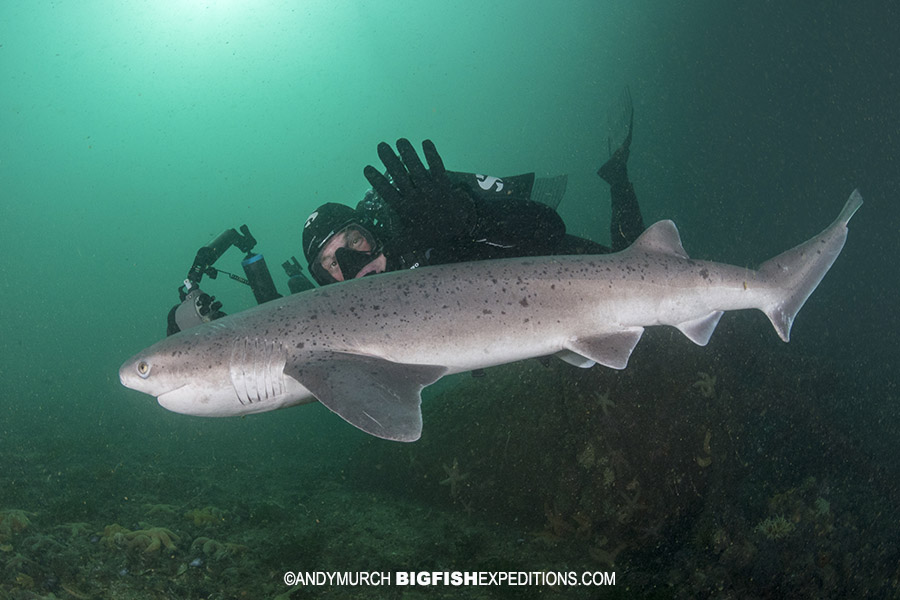 The next day, conditions were good enough for us to head offshore to the area where we look for blues and makos. As we were going two hours into the South Atlantic, it was important to wait for the right weather window. It was still a bit bumpy but we gave it a try and I’m glad we did. Once we got out into the open ocean, the winds were not too bad and we started chumming about 20 miles from shore. Sure enough, after a few minutes, the first Mako Shark arrived, followed by another shortly afterwards. Twenty minutes later a big Blue Shark showed up, bringing our shark count to seven species for the trip. 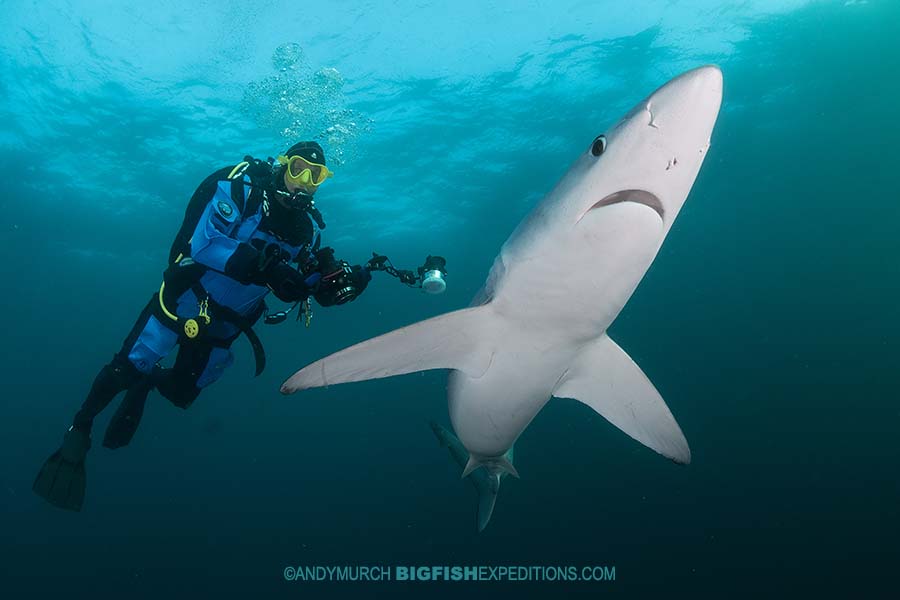 By the time we headed back in we had seen four makos and 3 or 4 blues. Not a bad dive and good enough viz for some nice photos of our guests with the sharks. 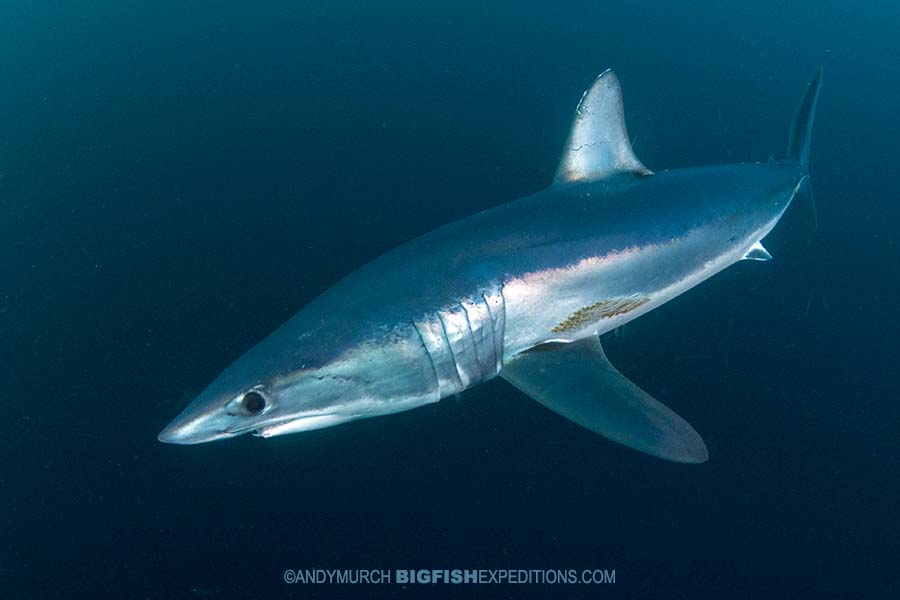 On our final day, we gave Seal Island another try but the white sharks again refused to make an appearance. It was disappointing but overall it still wasn’t a bad week.
Personally, I love the sevengills and catsharks that are endemic to this part of Africa but White sharks are the big draw for many guests so I putting this trip on hold until I hear that the white sharks have returned to Seal Island in good numbers. Once the sharks return, we will post dates for future trips. 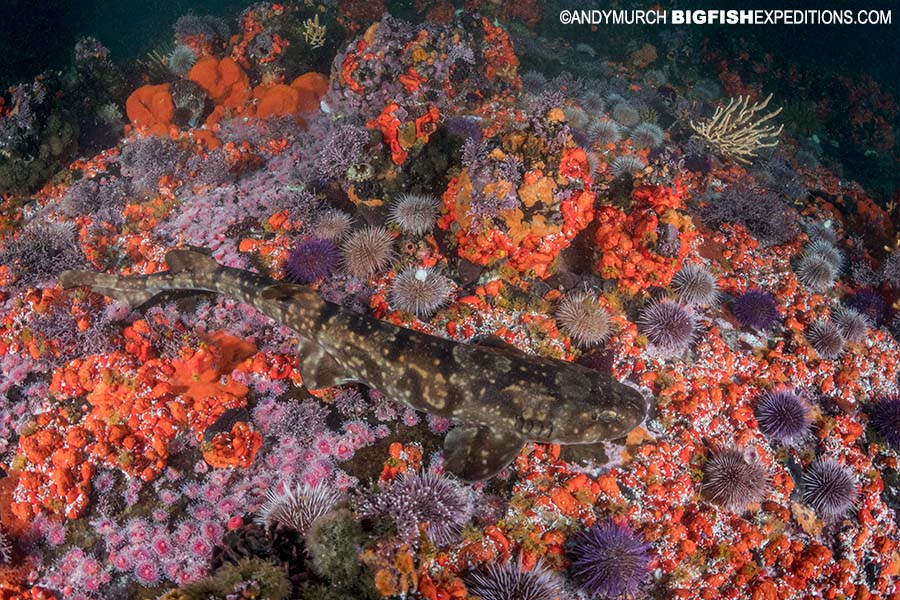 SOUTH AFRICAN ENDEMIC SHARK PHOTOGRAPHY EXPEDITION
If you are a serious shark fan and want to photograph as many sharks as possible, we are running a very special ‘once only’ South African Endemic Shark Expedition that we are planning for March 2021.
Apart from the sevengills, puffadder shysharks, dark shysharks, pyjama catshark, leopard sharks, and spotted gully sharks that live in False Bay, there are a number of other species of South African sharks that divers very rarely get access to.
We will be traveling east after diving False Bay, and stopping at Plettenberg Bay, Port Elizabeth, East London, all the way to Aliwal Shoal. At each location we will conduct chummed reef dives to photograph different catsharks including Tiger Catsharks, Lined Catsharks, Brown Shysharks and Natal Shysharks. We will also work with fishermen in False Bay and Aliwal Shoal where there are resident populations of deepwater squaloid sharks that divers never see. The sharks are an abundant part of the fishermen’s bycatch during their ‘redfish’ fishing activities. For the abyssal species, we will release these sharks with divers in the water so that we have a chance to snap a few shots of very unusual sharks as they swim back to their natural habitat. Although ‘purists’ may not be interested in this particular part of the trip, it is important to remember that this is essentially an eco-science trip to record all species of endemic sharks that we will have access to.
We expect this to be a very productive trip where we see at least 10 endemic South African shark species. We are limiting the group size to 5 guests plus Andy Murch as trip leader. It will be a relatively long trip – around 12 days – so it will cost proportionately more than our standard week long shark safari but the reward for serious shark fanatics will be worth the time and expense.
Two spots have gone already so if you are interested, please drop me a line asap! 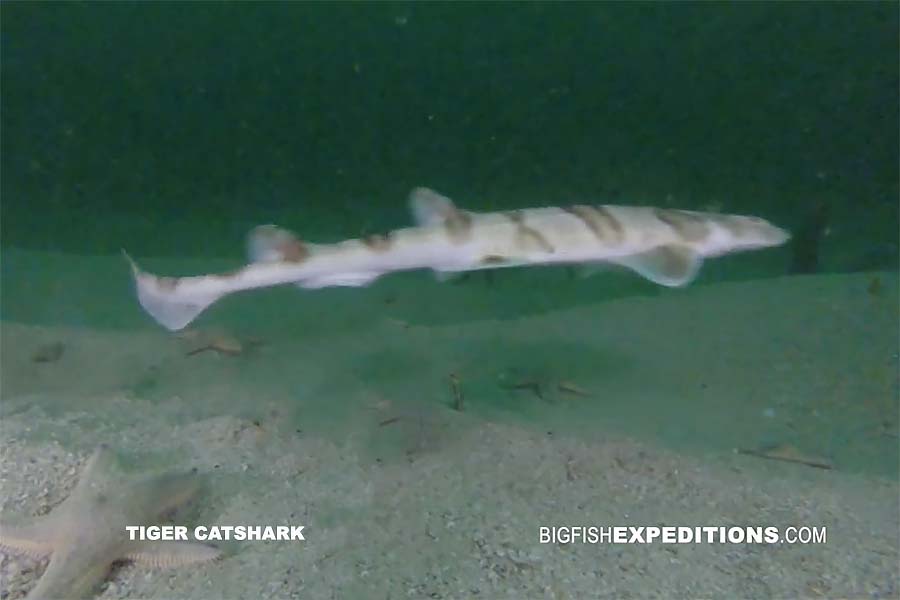 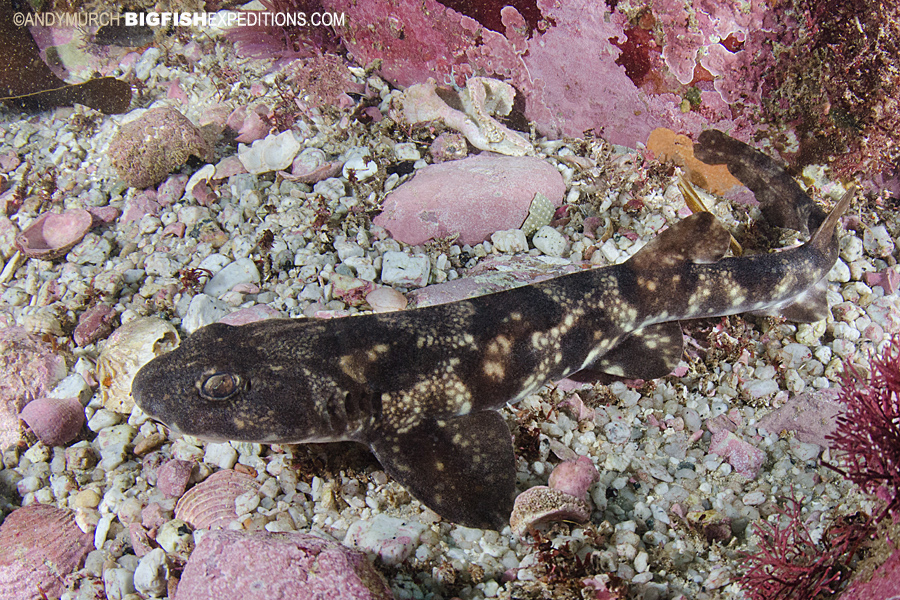 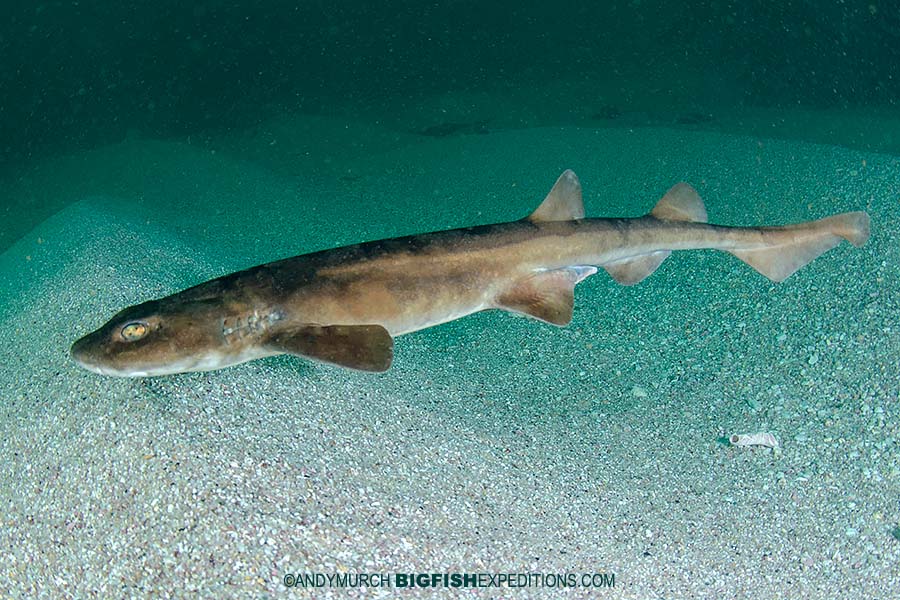