As usual, our first dives were at the The Canyon; a sharky dive site off San Benedicto Island. San Benedicto is the closest of the three islands that we visit so its a good first dive if you just want to get there and get wet.

The highlights on our first day included getting buzzed by silky sharks, our first manta fly-by and an encounter with an enormous longtail stingray that was surrounded by whitetip reef sharks.

After the dives we snorkelled off the back of the liveaboard with around a dozen silky sharks. This led to some excellent photography opportunities as the sun sank into the Eastern Pacific. 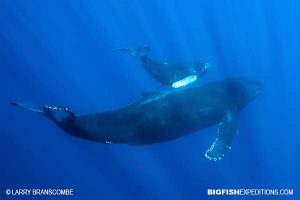 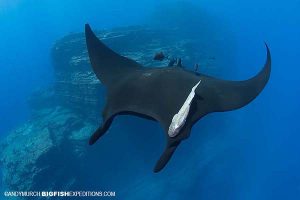 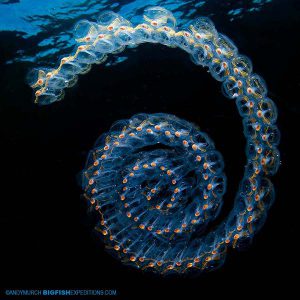 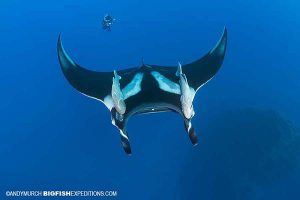 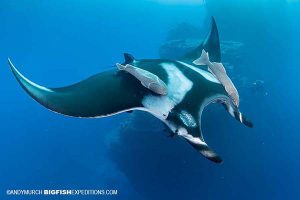 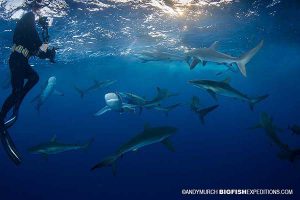 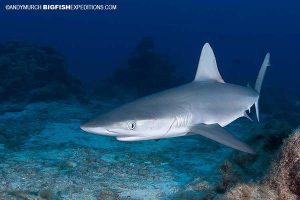 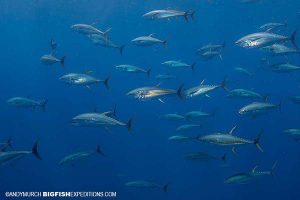 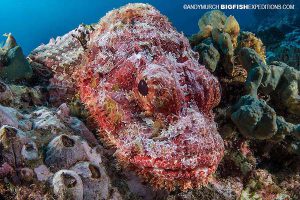 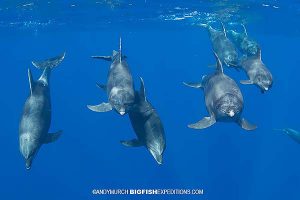 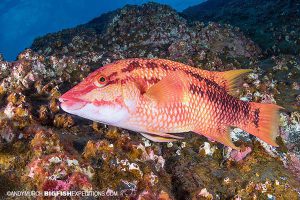 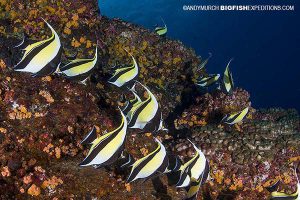 Diving with moorish idols and other fish in SocorroPhoto © Andy Murch 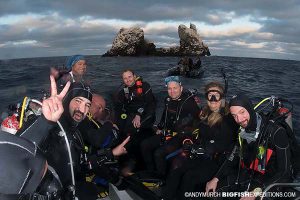 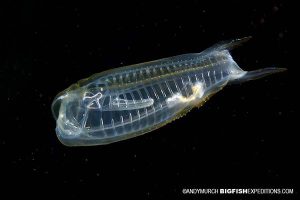 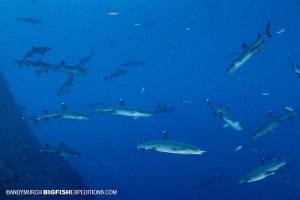 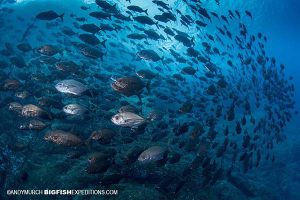 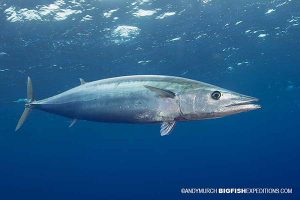 Scuba diving with wahoo and other pelagic predatorsPhoto © Andy Murch 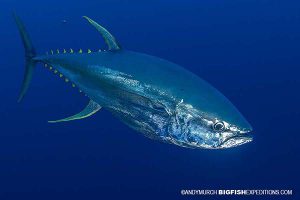 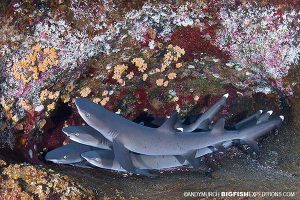 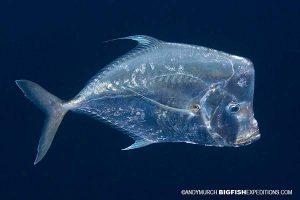 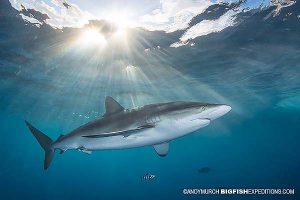 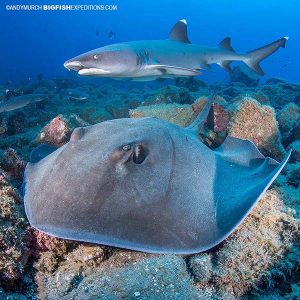 Diving with stingrays and sharks in SocorroPhoto © Andy Murch 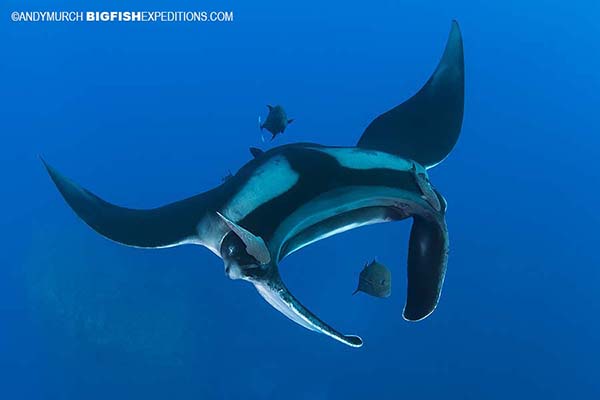 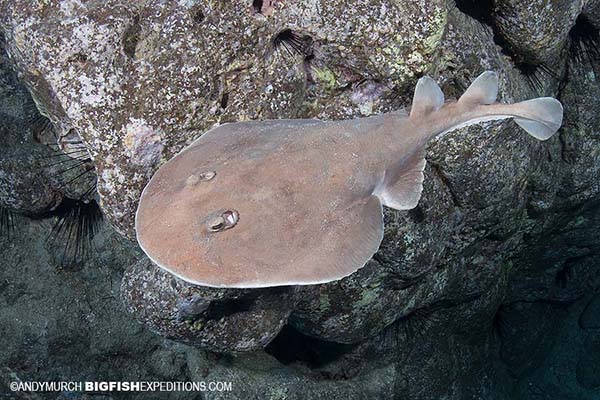 We knew the weather was supposed to deteriorate as the week went on on, so we sailed overnight towards Roca Partida; an exposed pinnacle that is great for pelagics but not so great when the seas pick up.

The action around the rock was pretty good; quite a few Galapagos and Silky Sharks and scores of resident whitetip reef sharks that swarmed the pinnacle.

Whitetips are very social sharks. When not hunting, they settled onto small rock ledges and took naps together.

We often see large yellowfin tuna hunting at Roca Partida. This year was no different except that there were enormous individuals chasing schools of jacks and a monster school of smaller yellowfin tuna that swum in a river of fish at the edge of visibility. It was a refreshing spectacle to see so many tuna in one place. Hope for the future!

While I was chasing tuna the DM took the group out into the blue to look for schooling hammerheads. The hammers were there but stayed deeper than usual, perhaps in response to warmer water which they are not fond of.

Close to the surface, I found a layer of large wahoo hunting in small groups. Other than the hammers, it felt as though everything was a bit easier to approach on this trip.

When the sun was low, I also tried my hand at blackwater photography. This is the art of shooting critters that rise from the depths every evening. This nightly event is considered the largest migration of animals on earth. It wasn’t actually dark so I was limited towards what I could shoot but these salps made for some fun photo subjects.

After two days at The Rock, we moved on to Socorro Island; the largest landmass in the Revillagigedo Archipelago. We dropped anchor at Cabo Pearce; a famous spot with multiple manta cleaning stations. It is also a great place to bump into friendly bottlenose dolphins.

Neither species disappointed us 🙂

After two dives with the mantas and dolphins we relocated to Punta Tosca. Exploring a new site in the shallows, we came across some large silkies and a few very cute baby Galapagos Sharks.

While exploring the area, I also stumbled on a couple of giant electric rays. Although they are called ‘giants‘ most are only 50cm long.

As the sun sank into the sea, we jumped in again with the silkies. This time, I concentrated on seeing how many sharks I could fit in a single shot. 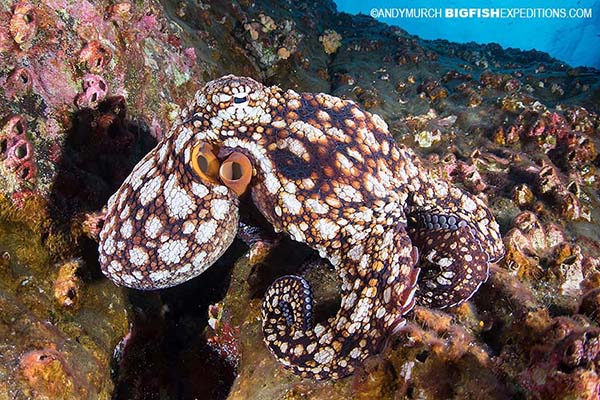 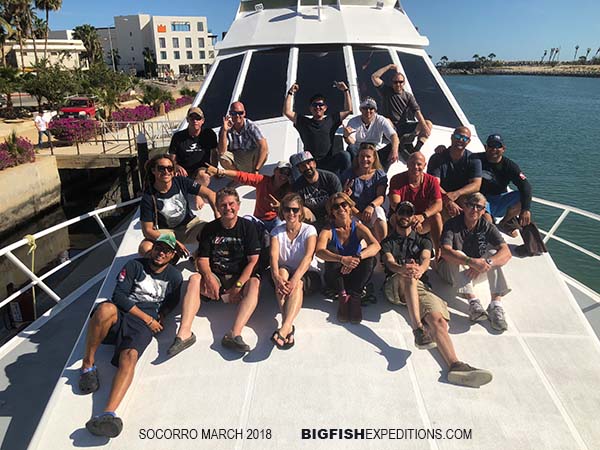 That night we made our way back to San Benedicto. The following day we dove with lots of giant mantas at The Boiler.

The Boiler rarely dissappoints. It is a large flat topped pinnacle that invariably attracts giant manta rays. Officially the rays are there to get their parasites removed by the resident cleaner fishes but the mantas seem to spend more time playing with divers that actually getting cleaned.

It was a great day. So good in fact, that on our last dive day we decided to stay at the boiler and squeeze in another three manta dives.

After the final dive, the crew spotted some humpbacks and the guests scrambled into the zodiacs and caught up with them. After a quick dip with the humpies, everyone retired to the liveaboard, happily exhausted, ready to relax on the way back to Cabo.

The Best of the Rest

there was plenty more to see while we dove if you could drag your eyes away from the big animals. There were far too many to include in one trip report but here are a few that I managed to get snaps of:

Another great trip to Socorro!

Without exception, it was a great trip. That is the beauty of Socorro; every trip is different but the encounters are always world class. I am looking forward to leading our next trip. Sadly that will not be until March 2020. I hope you can join us there: Socorro Manta Diving 2020