Seven species of sharks (out of a potential nine) plus great fur seal encounters and fantastic reef and kelp forest dives!

We started our week with a catshark dive at Whittle Rock; a gorgeous, 70ft deep reef in the middle of False Bay. While exploring the reef we stumbled upon a spotted gully shark which is usually one of the most illusive sharks in False Bay. Spotted gully sharks are nocturnal predators that hide in caves during the day. This one was under a a deep ledge so I slipped in beside it for a quick photo session before it shot out into the open and raced off to find a quieter spot to rest.

A walk in the forest

Taking advantage of the lack of surge, on our second dive we dropped anchor at Pyramid Rock; a pinnacle that pokes out of the kelp forest at Miller’s Point near Simonstown. Pyramid is a classic dive filled with catsharks, kelp and beautiful reef structures. Unlike California’s virtually impenetrable kelp forests, the bamboo kelp in False Bay is far more open plan, allowing plenty of light to stream through onto the reef. We found hundreds of cartilaginous predators on that dive but even without sharks, this would be amazing place to suck back an air tank or two.

Blues in the deep

The next morning the weather gods smiled on us. Conditions were great for a blue and mako feed so we ran right out of False Bay into the Southern Atlantic. Two hours out we started chumming and within a few minutes we had blue sharks circling the boat. By the time we got in we had an estimated 25 blue sharks in attendance. No makos showed up but it was wonderful to see so many healthy blue sharks in clear blue water. I have done blue shark feeds all over the world and I have never seen so many sharks as we get South Africa. 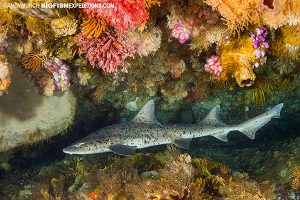 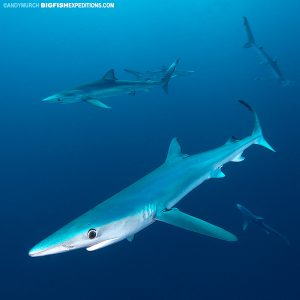 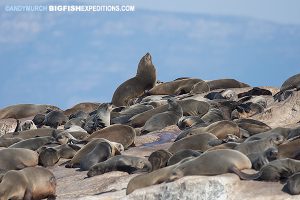 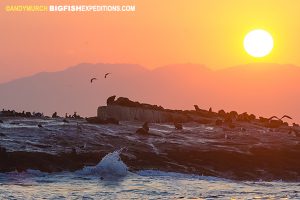 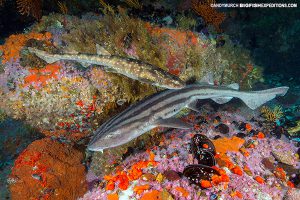 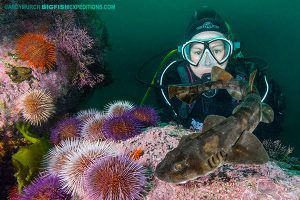 Diver with a brown catshark in False Bay, South Africa 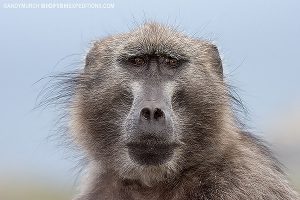 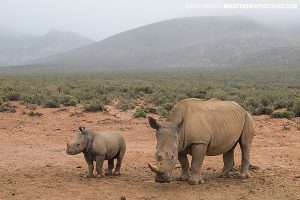 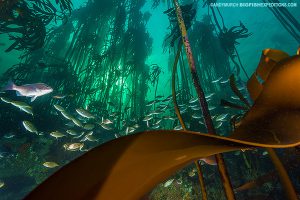 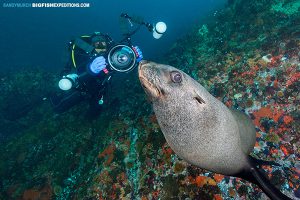 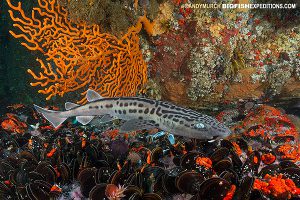 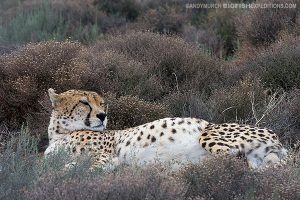 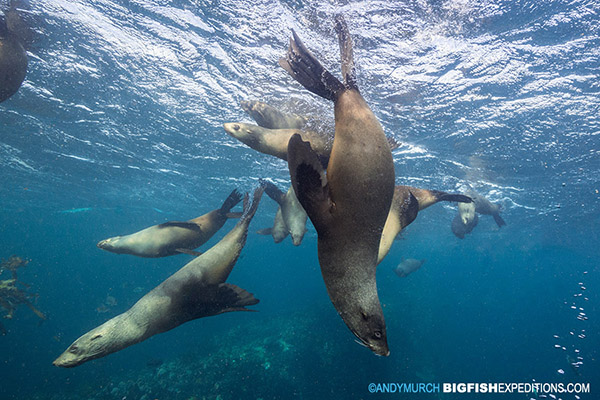 On the way back to port, we stopped at a small cape fur seal colony at Partridge Point. African fur seals love to play and these ones were no exception. They ran rings around us while we composed image after image of their antics.

The next morning we arose before dawn and motored out to Seal Island – a barren rock that is home to 70,000 cape fur seals.

Just as the sun rose, the seals that were returning to the island came under attack from the circling great white sharks. We saw three predations that morning including a spectacular full breach close to the boat. Sadly I did not capture the moment on camera so here is a shot of the island and one of its furry residents.

That afternoon we got word that the weather was about to change so rather than lose a day, we decided head to the reef for three inshore dives. First stop was Atlantis; another deepish reef – by False Bay standards. Settling onto the substrate at 60ft we began hunting for catsharks. Four species showed up to be photographed including striped ‘pyjama’ sharks, leopard catsharks, dark shysharks and – my personal favorites – puffadder shysharks

Back to the seals

by popular demand, on our second dive we returned to the seal colony at Partridge Point. The wind was already starting to build but we were told that the seals spend more time in the water on windy days so we eagerly dived in. Sure enough, the water was full of frolicking pinnipeds that stuck around until – one by one – we returned to the boat to warm up before dive number three.

Anchoring in the middle of the kelp forest, we did a huge loop around Miller’s Point in search of sevengills – aka cowsharks – but they were nowhere to be found. A couple of months ago, all of the cowsharks fled from the Miller’s after they were attacked by a pod of orcas. Chances are they will be back next year but for now we contented ourselves with the abundant catsharks.

Tragically, my camera gave me an ‘Error’ sign just before a pair of pyjama catsharks started mating. I guess I will just have to keep returning to False Bay until I have a chance to photograph this behavior.

After another morning at Seal Island we took a drive to Cape Point park to hike between Cape Point and the Cape of Good Hope.

After enjoying the incredibly rugged landscapes we tracked down some wildlife including ostriches, eland and some over friendly baboons. One of the baboons managed to get into our van but fortunately we managed to get it out unharmed before it ripped everything open in search of food. 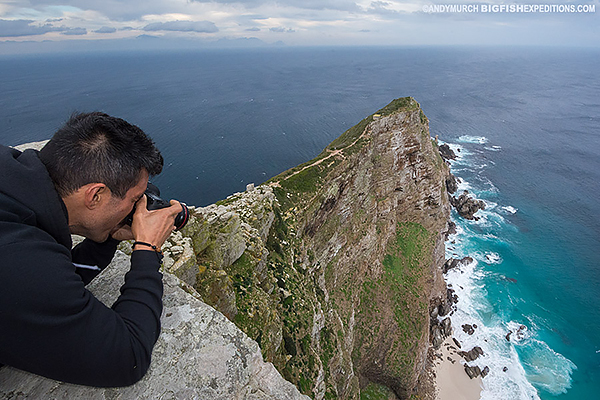 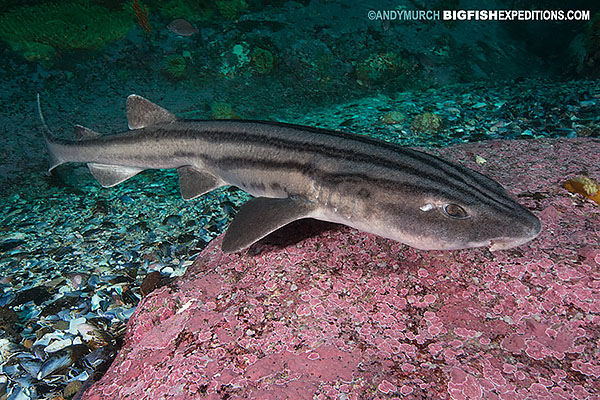 The next morning the ocean was too rough to dive but that was ok because we always have one full day safari scheduled so that our guests can enjoy some of South Africa’s iconic land animals.

We managed to find most of the animals we were hoping to see plus a few that don’t usually show up, like these clashing hippos that were fighting for dominance over a female.

A final dip in the Harbor

On our final day in False Bay we had one scheduled dive left but the ocean was still acting up so we dropped right at the boat mooring to play with the catsharks. Even here in a man made environment, there are plenty of little sharks so everyone came home with great memories and lots and lots of shark images!

Join us next year!

After a last supper we said farewell to our departing guests and packed up our gear for the long ride east to Port Saint Johns where we run our yearly Sardine Run expeditions. As soon as we left Simons Town I was already pining for False Bay’s reefs. This remains (in my humble opinion) one of he top shark diving locations on the planet and my personal favorite.