Our 2017 Cat and Primate Safari in a Nutshell

We knew it was going to be a great week as soon as we were picked up by our expert guide Dulan at the airport. It was around 9pm and we were exhausted from our international flights. We were supposed to go straight to a safari camp bordering Wilpattu National Park; a three hour drive to the west. After introductions, Dulan asked if we wanted to go spotlighting for night mammals on the way to the camp. We eagerly agreed!

That night we made numerous detours to Dulan’s secret spots. We didn’t reach the camp until the middle of the night but that was fine because on the way we got our first taste of Sri Lanka’s amazing biodiversity including our first jungle cat – Felis chaus. It was a little distant for my strobe to light well but it was fascinating watching it work its way through the grassland in search of rodents to eat.

We also saw a Red Slender Loris feeding on fruit as we walked down an unpaved road surrounded on either side by dense trees. The tiny primate – about 20cm tall – initially hid behind some branches but Dulan started squeaking at it and it soon poked its head out to see what strange creature was making the noise. Over the next few days, Dulan’s bizarre animal call never failed to attract the critters we were after.

Exhausted, we decided to call it a night. Arriving soon afterwards at the camp, we were pleasantly surprised to see that our tented accommodation wasn’t exactly ‘roughing it’ 🙂 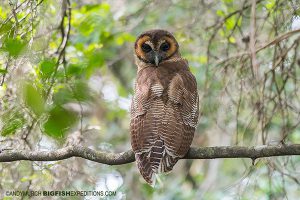 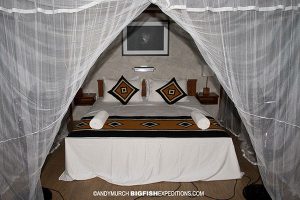 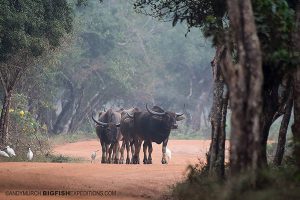 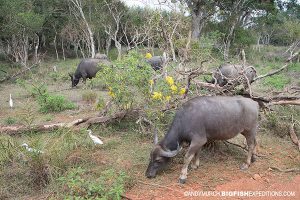 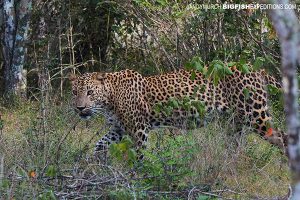 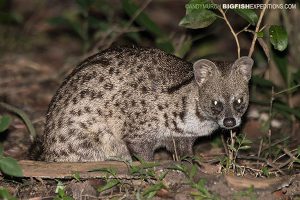 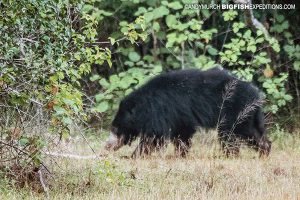 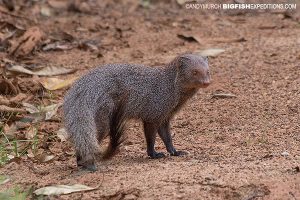 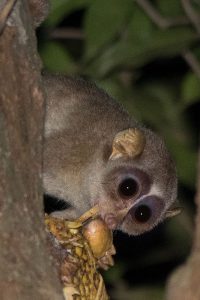 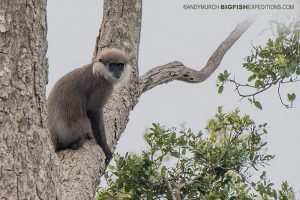 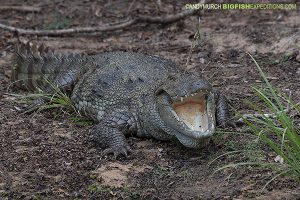 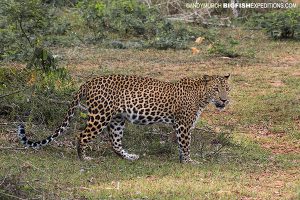 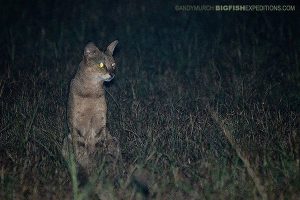 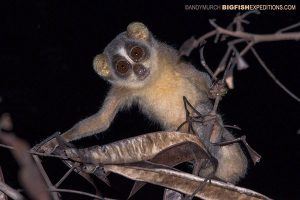 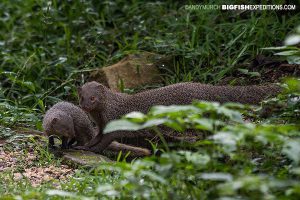 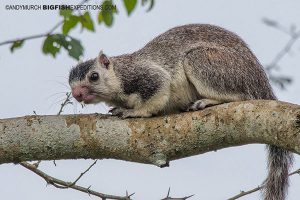 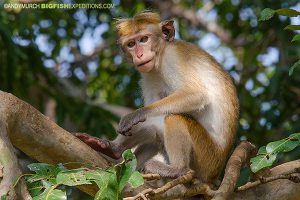 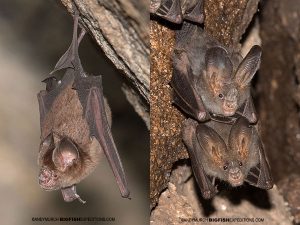 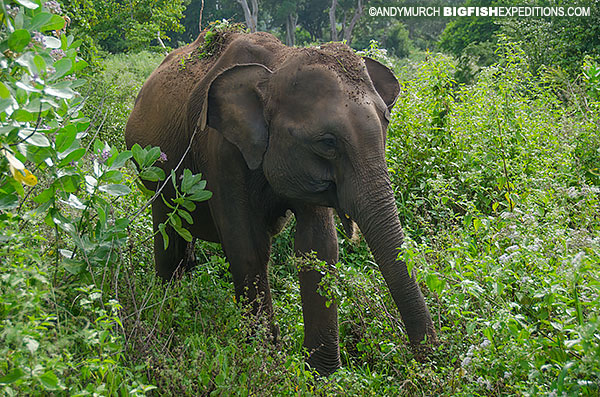 Our second day started with a hike around the edges of the park. As expected, by midmorning there were not a lot of large mammals out and about except distant Elephants within the park boundary.

However, there were some monkeys in nearby trees and a few foraging giant squirrels. These are about three times the size of your average North American or European sciurid species and quite easy to approach.

At noon we went by jeep deep into the park. Wilpattu is a beautiful region with a diverse assortment of animals and bird species.

Unlike Yala and many other dry zone protected areas, the park is heavily forested. This makes it a little harder to spot wildlife but also means that there is a higher density of animals and birds because the habitat is more pristine.

It didn’t take long for us to locate many of the common fauna including wild boar, Asian elephants, herds of chital (white-spotted deer) and small groups of wild water buffalo. Most Sri Lankan buffalo are feral domestic buffalo – Bubalus bubalis, or a genetic mixture of the two species. However, the buffalo in Wilpattu are almost all genetically pure wild buffalo – Bubalus arnee. You can easily tell the difference by their wide outstretched horns. Their domestic cousin’s horns generally curve upward and inwards.

Although we were concentrating on mammals, there were plenty of reptiles present including mugger crocodiles around the lakes and green and grey vine snakes in the trees and bushes.

There were reports of leopard sightings and we found fresh tracks across many of the trails but we left the park around 6pm without seeing Sri Lanka’s largest land predator. After supper we went on an intensive spotlighting trip around the periphery of the park. During that session we found lots of small animals including palm civets (tree dwelling cat-like mammals) but the highlight was a Grey Slender Loris that Dulan spotted in a tree on the edge of a chilli pepper field. Keeping a close eye on the undergrowth for snakes, we ventured into the bush for a closer look and the loris obliged very nicely 🙂

Early the next morning we drove back into the park. After about an hour we picked up the trail of a young male leopard and waited for him to materialize out of the undergrowth. Eventually he did and we watched him for some time as he loped along the edge of the dense jungle. Eventually he slipped away but not before I had fired off plenty of images.

Once the leopard was gone we went in search of other species but we got anoher great sighting later in the day. Other than leopards we saw an impressive list of mammals from mongooses to monkeys and a distant sloth bear – my first but hopefully not my last!

After a sumptuous lunch of local curry dishes, we left Wilpattu and headed for Sigiriya in the centre of Sri Lanka’s northern dry-zone forests. We were hoping to find fishing cats but sadly we were thwarted by the excessive rains that fell much later than expected. However, while in Sigiriya we found plenty of other animals to keep us busy including all three of Sri Lanka’s other primate species.

By day we encountered endless monkeys, elephants, small herds of chital and mongooses. There are four species of mongooses in Sri Lanka. The most common are Ruddy Mongooses but we also saw a mother and baby Grey Mongoose. 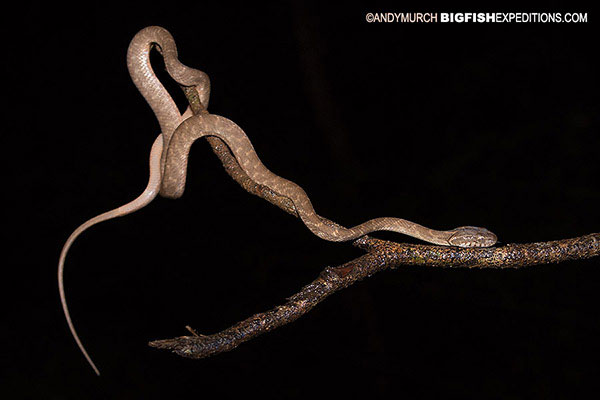 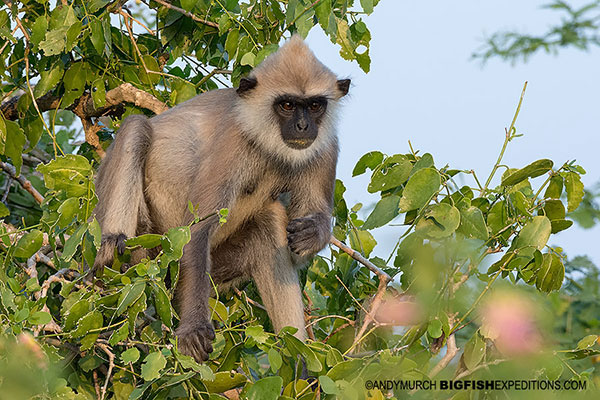 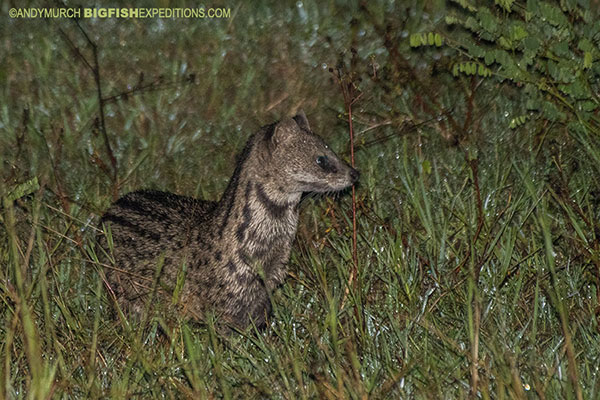 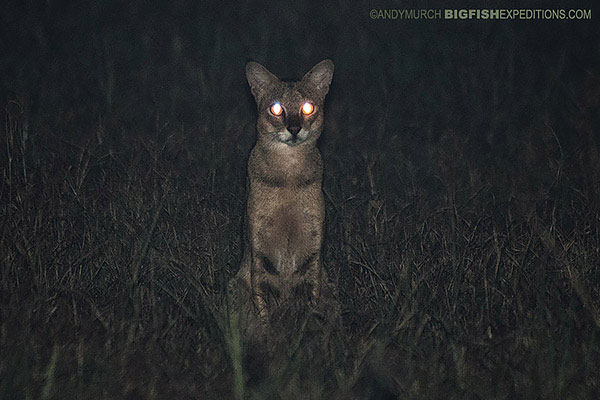 By night we scoured the forests and fields for cats and civets. Civets are distantly related to cats and usually live in trees where they hunt for birds, reptiles and small mammals. We saw a few palm civets but the most common and the most striking civets that we found were Small Indian Civets.

On the reptile front, we saw many monitors and more vine snakes plus this mildly venomous Forsten’s Cat Snake.

By day, there were also numerous turtles in the bush, including Indian Flapshell Turtles and Indian Star Tortoises. It was nice to see that they haven’t all been collected for the pet trade.

Each day in Sigiriya we also visited a different cave system or abandoned buildings where we could photograph different bats. We found seven species in total but I only managed to snap images of six. Seeing so many bats up close was a treat that we did not expect.

On a regular week long trip we would have gone south after Sigiriya to hunt for some of Sri Lanka’s other endemic mammal species that are confined to wet-zone forests but this year was just a short add on to our Sri Lankan Blue Whale Expedition so after five days we returned to Colombo and went in search of whales. Next year we will run a full length Safari with all of Sri Lanka’s Iconic Mammal Species.

Incidentally, the blue whale trip was an epic adventure with daily world class blue whale encounters but more about that in the next trip report.

Until Next Year!
Andy Murch

Andy is an accomplished Marine and Terrestrial Wildlife Photographer and Trip Leader at Big Fish Expeditions.

JOIN US NEXT YEAR IN SRI LANKA

Join us next year for a safari you will never forget: 2018 Sri Lanka Leopard and Endemic Mammal Safari