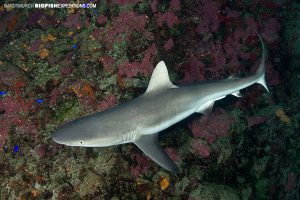 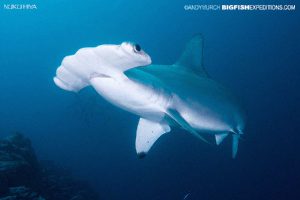 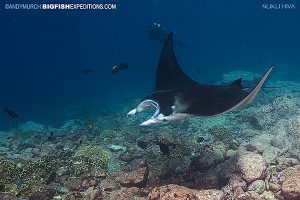 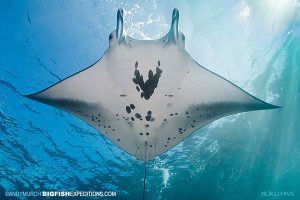 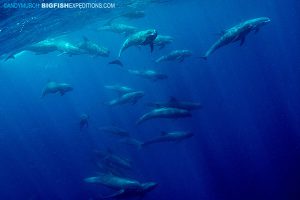 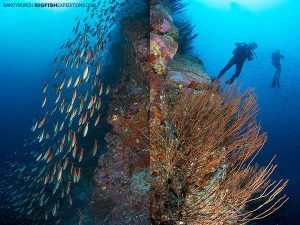 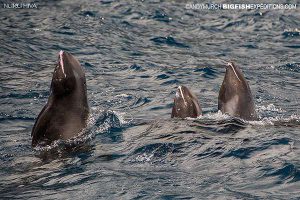 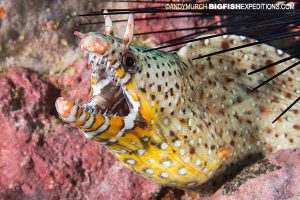 In a nutshell, we nailed it! Not only did we get to swim with huge pods of melonheaded whales (they are actually big dolphins) but the diving was beyond everyone’s expectations!

The melonheaded whales live along an exposed stretch of coastline so we had to wait for perfect conditions before we could venture out to play with them. Fortunately a window of opportunity opened each week so both our groups got to swim with them during the time we were there.

The melonheads were shy but also extremely curious about us and they immediately started spy-hopping to get a better look at us.

Then we slipped into the water while our captain motored past in the dive boat leading the cetaceans right past where we were floating. It was a fantastic chance to watch a species that rarely comes in contact with humans. 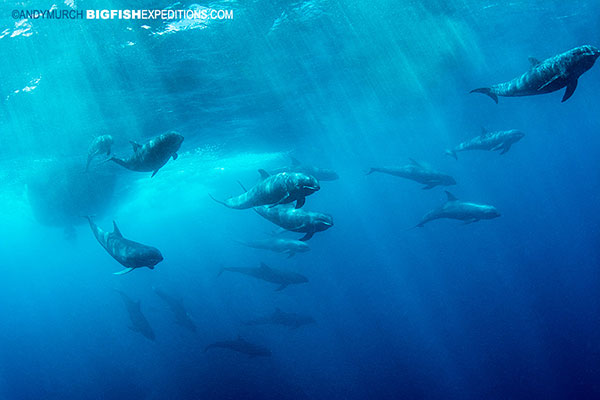 The last time I came to Nuku HIva I was shooting a story for Diver Magazine about the best spots to dive in French Polynesia. I was allotted only two days to dive at this remote island so I really didn’t develop an appreciation for the high caliber of diving here.

This time, I quickly learned that Nuku Hiva is not just about encounters with melonheaded whales. The big animal diving around Nuku Hiva is world class!

Virtually everywhere we dove we encountered sharks. Even in the marina there were blacktip sharks milling around, waiting for scraps to fall from the fishing boats. At one point I jumped in to get some snaps but the visibility made it a sketchy shoot.

At the edge of the bay where we stayed, we dove at a spot named The Sentinel. It was barely a mile from the village but it was a great spot to dive with scalloped hammerheads. I have never seen hammers so close to civilization. I have also never managed to get so physically close to scalloped hammerheads but these ones actually seemed interested in us and made very close approaches.

We regularly saw scalloped hammerheads at a number of sites around the island. They were in small groups rather than the huge schools you see at destinations like Cocos Island or the Galapagos but the closeness of the encounters made up for the smaller numbers and once we saw a school of around forty hammers which was pretty good for Nuku Hiva.

At most sites we would see grey reef sharks, whitetips, both kinds of blacktips and the odd silvertip. At one site named Tikapo (a current swept pinnacle far from shore) we encountered about a dozen silvertips, lots of other species and a squadron of eagle rays. The pinnacle was also swarming with fish. 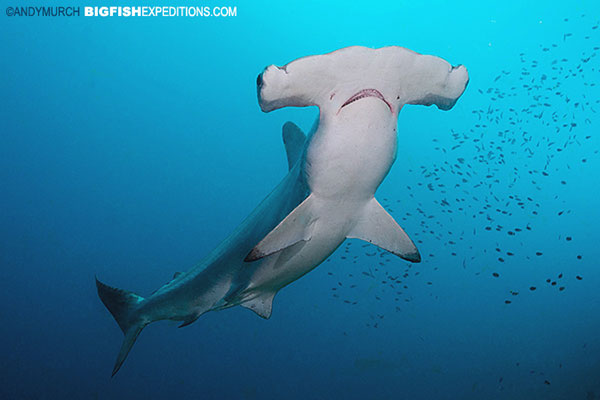 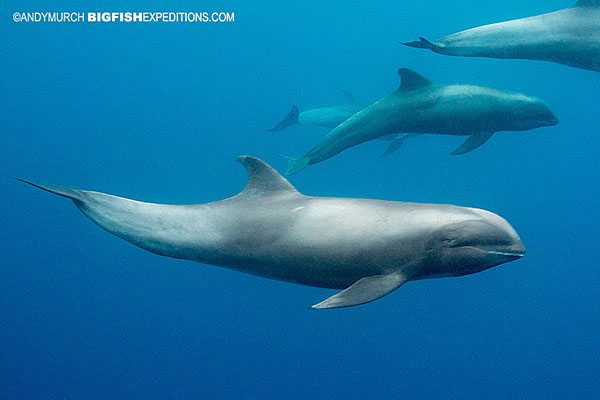 If you could pull your eyes away from the megafauna swimming by, it was easy to find octopuses and other secretive reef dwellers.

Some dive sites were literally crawling with morays. I counted more than ten species at a site named Tetemanu including the rare and beautiful dragon moray pictured here.

Last but far from least, we constantly ran into mantas. Sometimes they were at the surface and we would slide in next to them during our surface intervals. And sometimes we would encounter them on our dives. At one site I counted more than 20 mantas!

I could go on and on about the quality of the encounters at Nuku Hiva but you really need to see it for yourself. Big Fish Expeditions will be back there in the next year or two. Keep an eye on the schedule for upcoming trips.