Snakes of the American Southwest 2019

In August, we flew into Tucson, Arizona to explore the idea of running a Southwest Snake Expedition. The trip was timed to coincide with the southwestern monsoon when endemic snakes are the most active.

Our fearless leader was Todd Pusser; an experienced snake handler and a highly accomplished snake photographer. This combination of skills is important because we wanted to come home with world-class images of as many snake species as possible. 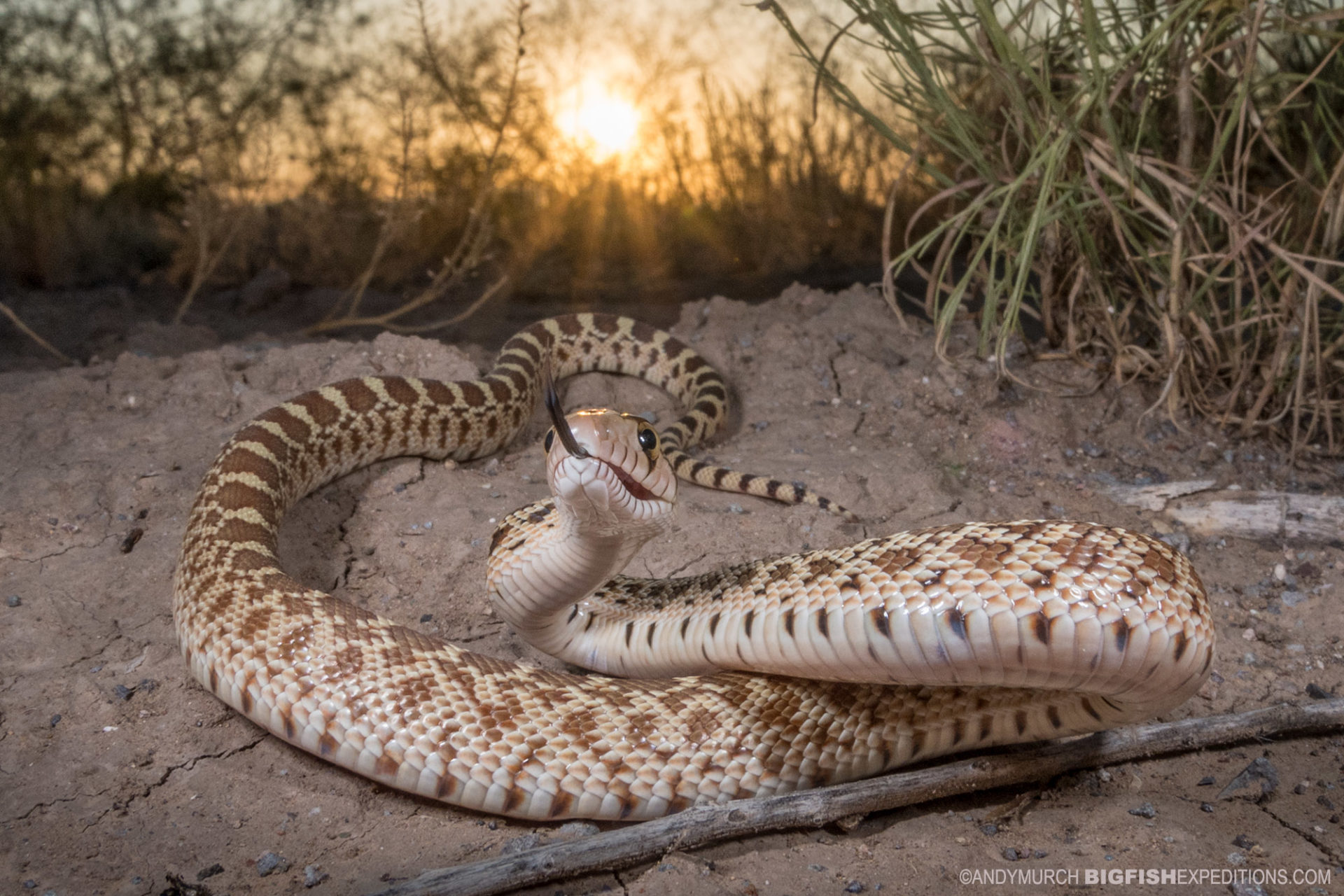 We based ourselves in Portal, Arizona at the foot of the Chiricahua Mountains. This gave us access to snake species that thrive in the high desert and other snake species that live on the slopes of the mountain. As one drives from the desert scrub into the rocky terrain of the foothills, the species composition significantly changes. One snake that you are far more likely to see in the foothills rather than on the desert floor is the Black-tailed Rattlesnake (Crotalus molossus) 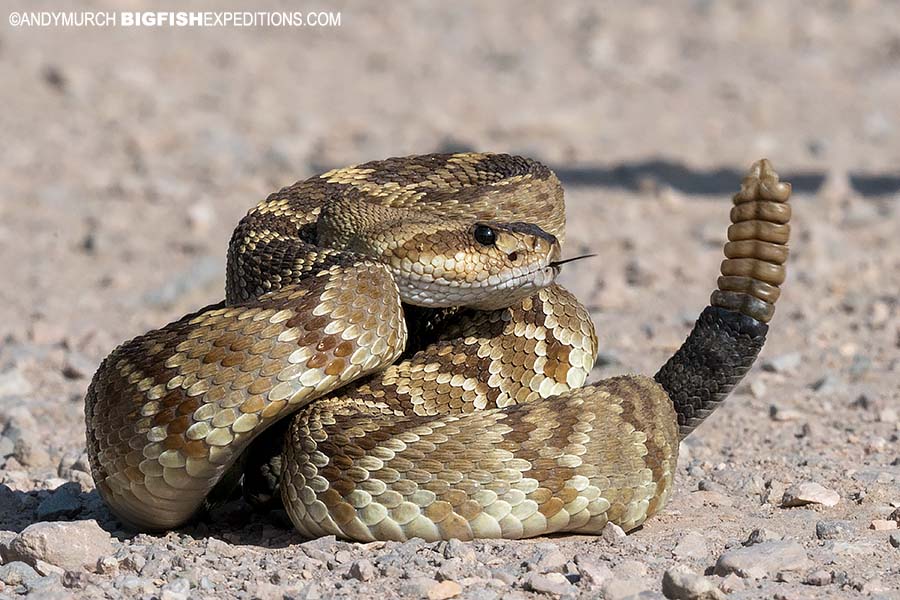 Each morning, we rose early and drove the desert roads in search of snakes and other creatures that are active in the cool morning light. Later, when the sun turns the desert into a furnace, most animals retire to their dens until the relentless heat alleviates in the late afternoon. 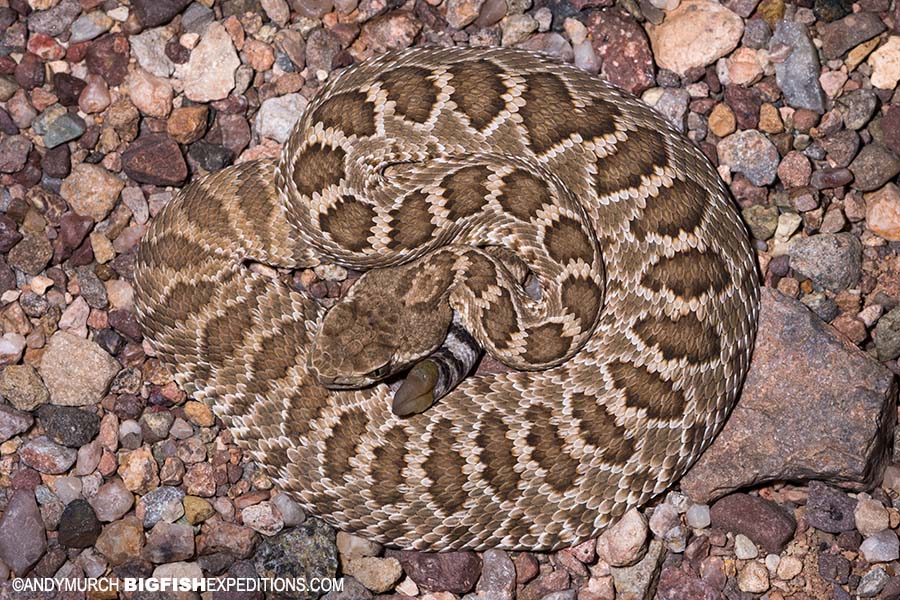 After an early drive around, we generally headed into the foothills to look for rock rattlesnakes that live in the talus slopes of the mountain. Experts at camouflage, we only found one dead specimen but we did see lots of rock rattlesnake food i.e. Yarrow’s Spiny lizards and striped plateau lizards. Both have very small ranges in Arizona, particularly the striped variety, which is confined to the Chiricahua Mountains.

The Chiricahuas are one of the southwest’s famous sky islands; lush mountain peaks that are cut off by the surrounding desert from other mountain ranges. Like similarly isolated islands in the ocean, Arizona’s sky islands each contain species that have evolved in isolation and can be found nowhere else on earth. 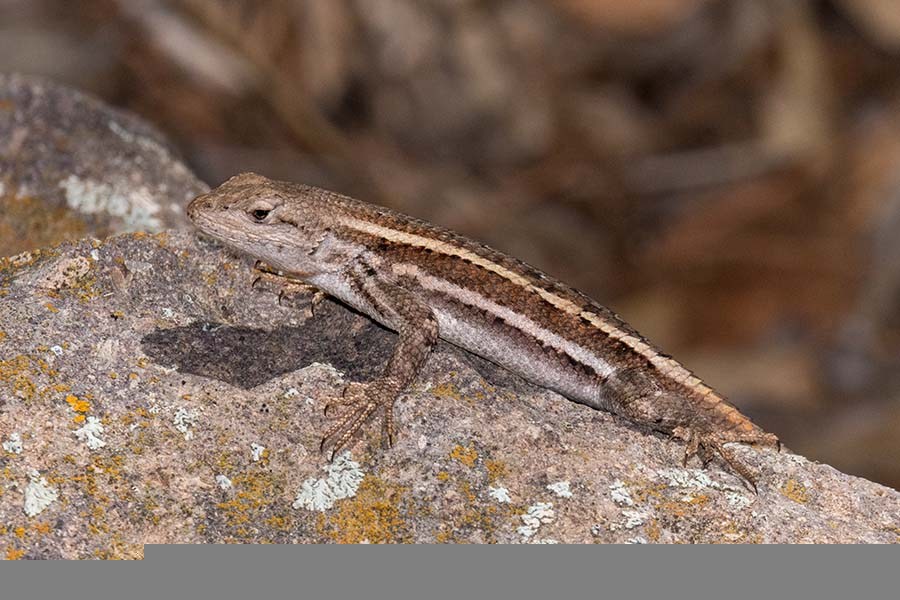 The mountains also support many wide ranging species of mammals including mountain lions, black bears, ringtails, skunks, javalinas, and squirrels. This is the only place in the US where Mexican fox squirrels and be seen. It is also a partuclarly good place to photograph skunks which were extremely nonchalant about our presence.

After a relaxing afternoon siesta, during which we charged batteries and downloaded images, we would head out for the main event. Once the sun finally sets, the Chiricahua Desert comes to life. The vast majority of desert creatures are nocturnal so just after dark is the best time to find snakes on the move. One fine example is the aptly named Night Snake. 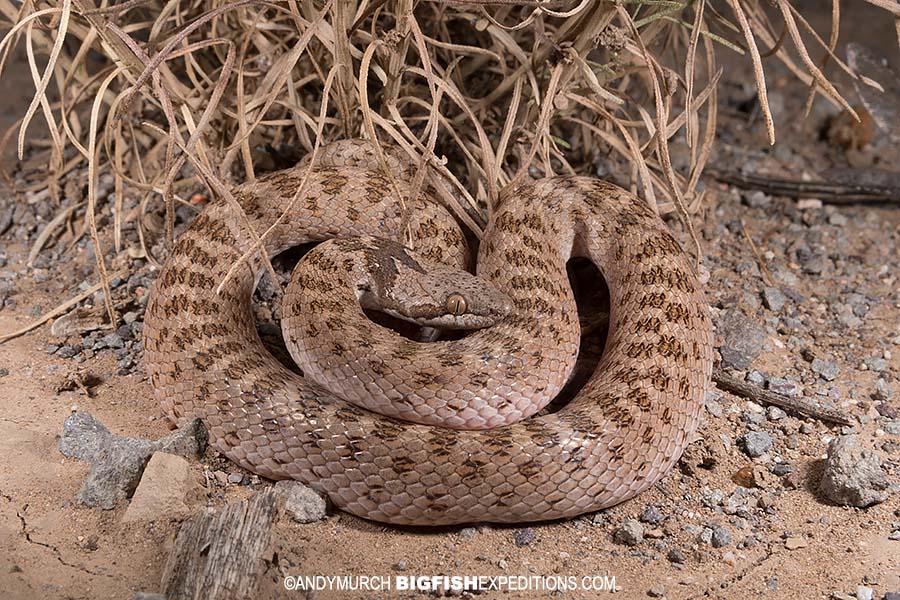 We drove the back roads around Portal and beyond; some nights even crossing into New Mexico. The night drives were often so productive that we would find a dozen or more snakes including the two most common venomous snakes of the desert floor: the Western Diamondback Rattlesnake and the Mojave Rattlesnake (C. scutulatus) pictured here. 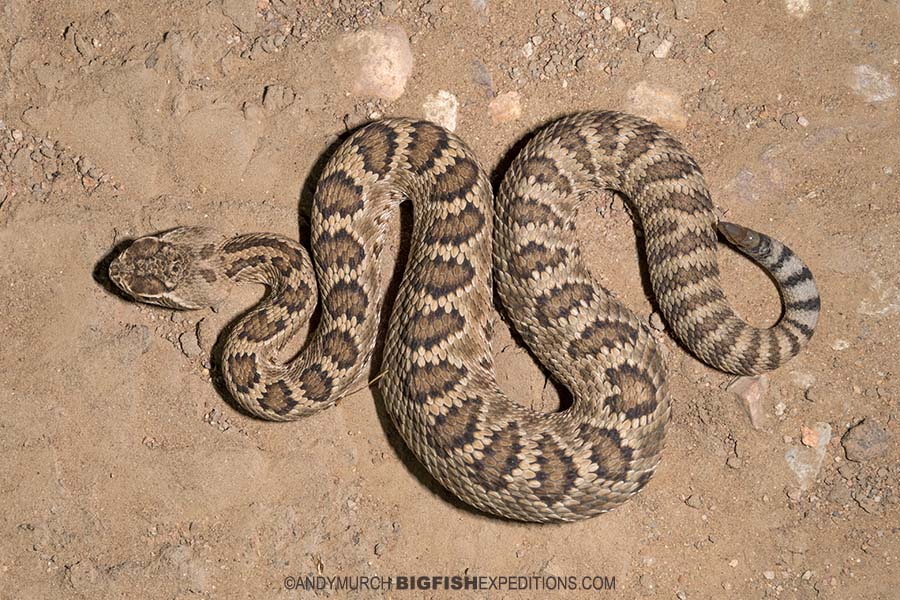 Most of the snake species we ran into were well camouflaged but some were beautifully patterned like this Long-nosed Snake (Rhinocheilus lecontei). One evening we were lucky enough to spot a vibrantly banded Sonoran coral snake (Micruroides euryxanthus) crossing the road but it was moving fast and far too erratically to get a shot off before it disappeared back into the bush. 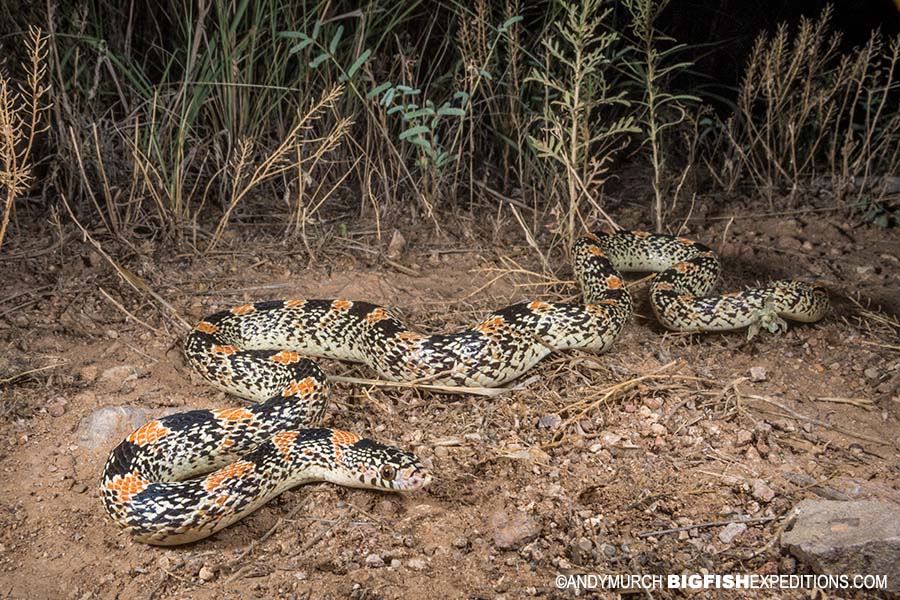 The most frequent species we saw on our night drives was the Western Diamondback (C. atrox). Most specimens were strikingly patterned like the mojaves, but one was a rare leucistic form that had almost no markings at all. 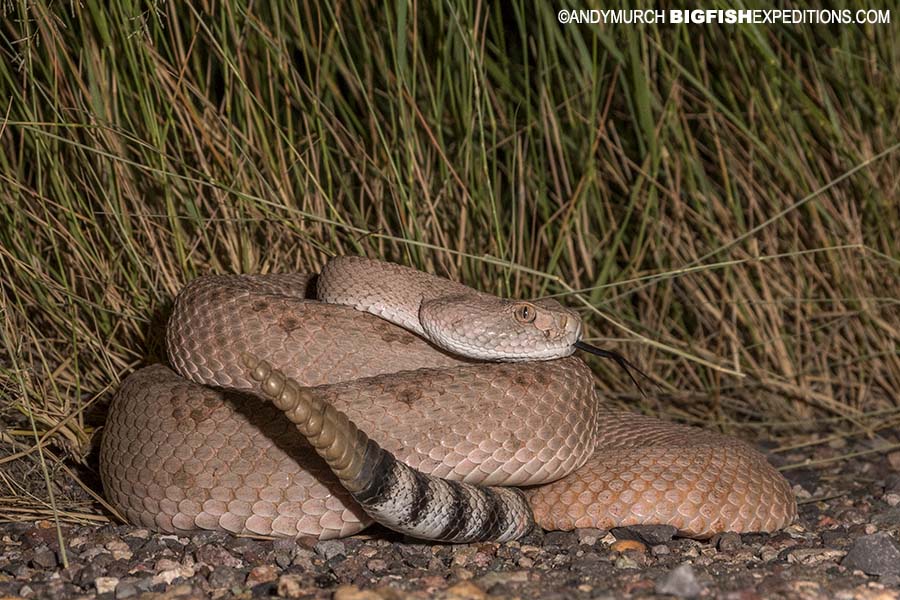 We encountered six different species of colubrid snakes during the long evening expeditions. Most were small, young animals that – with Todd’s help – we were able to position in the scrub next to the road for better images. If that sounds a bit too contrived, consider that the majority of snake images one sees in books and magazines are usually manipulated in one way or another. The nice thing about taking snakes from the road and photographing them nearby, is that by doing so, we probably saved many snakes from certain death from passing cars. There are so many snakes on the back roads of Southern Arizona that hundreds are killed each night by motorists.
This pencil-thick colubrid that we helped across the road is a harmless Plains Black-headed Snake (Tantilla nigriceps). 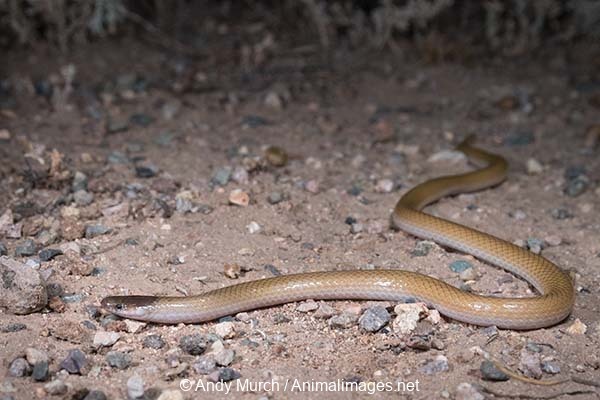 Perhaps the rarest snake we encountered was a tiny Chihuhuan Hooknose Snake (Gyalopion canum). This pretty little species mostly lives in Mexico but a small population also exits in this corner of Arizona. 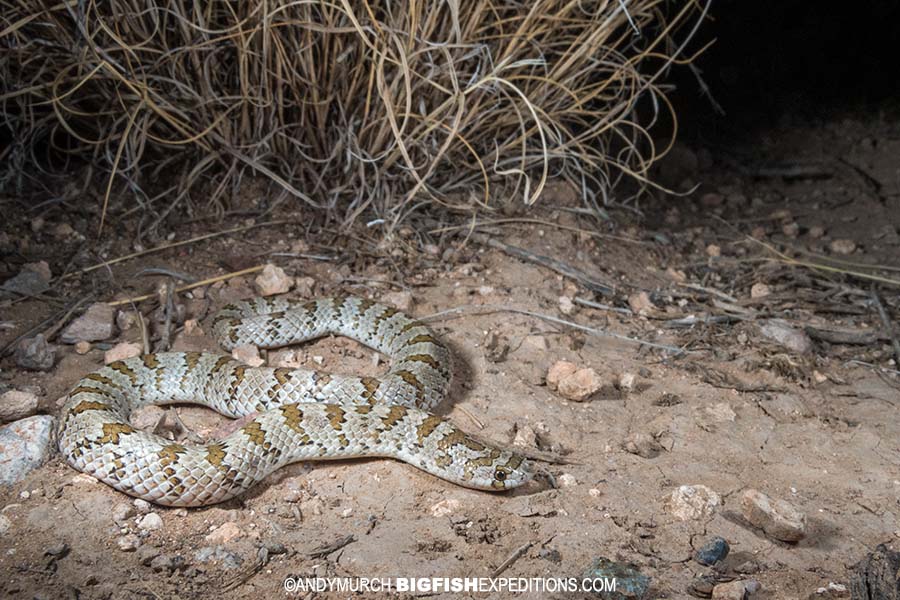 Our permit allowed us to collect as well as handle snakes but we had no intention of keeping any ‘long term’. Some nights, we took a small colubrid back to the lodge in a snake bag for a sunrise photo shoot. Before leaving, we paid close attention to exactly where we had collected it so that we could bring it back to exactly the same spot. Snakes are extremely territorial and have small home ranges so we made sure that the snakes had no trouble finding their bearings upon release.
The ‘canned’ sunrise shoots were fantastic opportunities to take stunning snake images. This small Sonoran Gopher Snake (Pituophis catenifer affinis) was particularly photogenic. 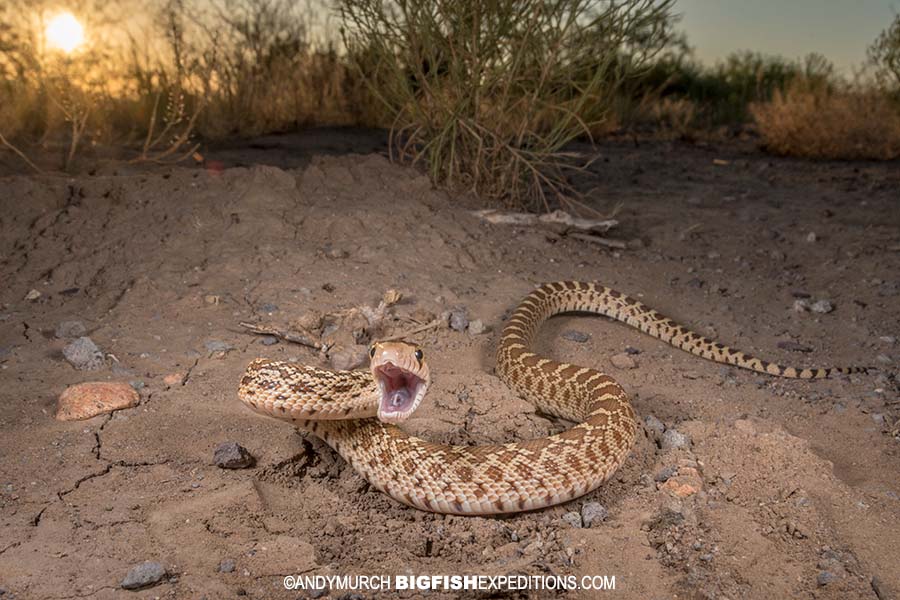 On nights when there was enough rain, we also ran into a few amphibians (not literally). On one patch of road heading south towards the Mexican border, Couch’s Spadefoot Toads were hopping all over the place. 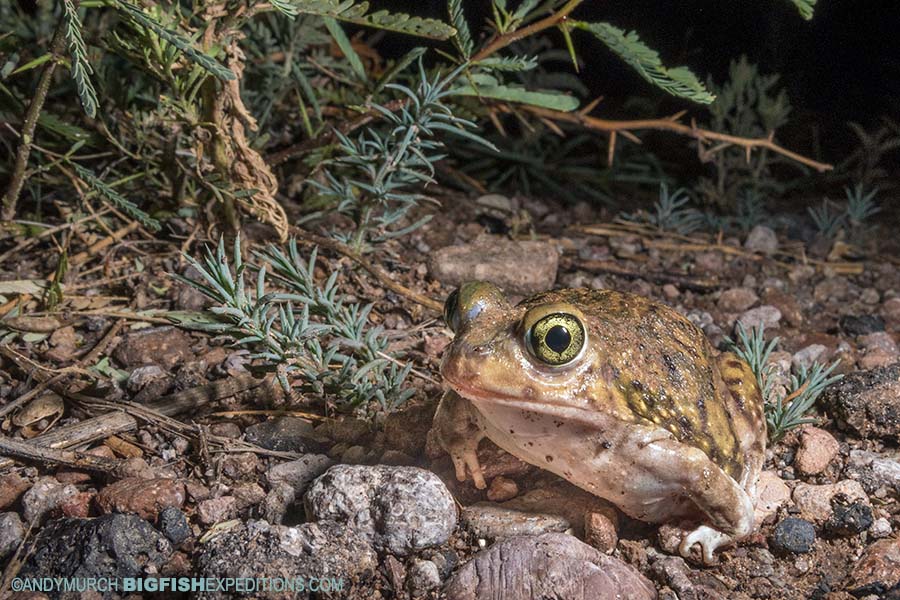 By far the most striking amphibian we saw, was a large Western Tiger Salamander (Ambystoma mavortium) that we helped across the road and enjoyed a short photo session with, before it waddled off into the night. 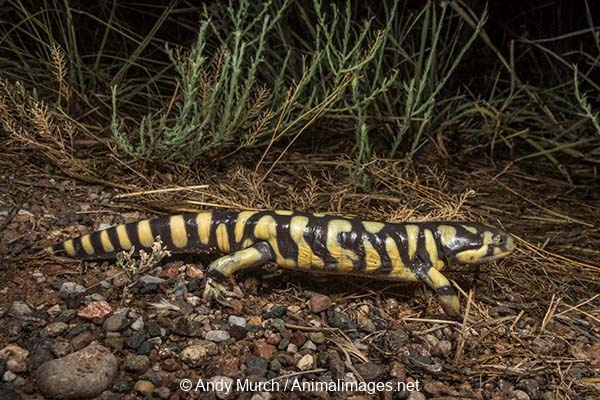 Another very pretty colubrid snake that is common in this part of Arizona is the Desert King Snake (Lampropeltis splendida). Higher up in the foothills of the Chiricahua Mountains there is a gorgeous tri-colored species called a Mountain King Snake. Having photographed the former, we looked long and hard for the latter on our morning hikes but to no avail. That one will have to wait until the next trip! 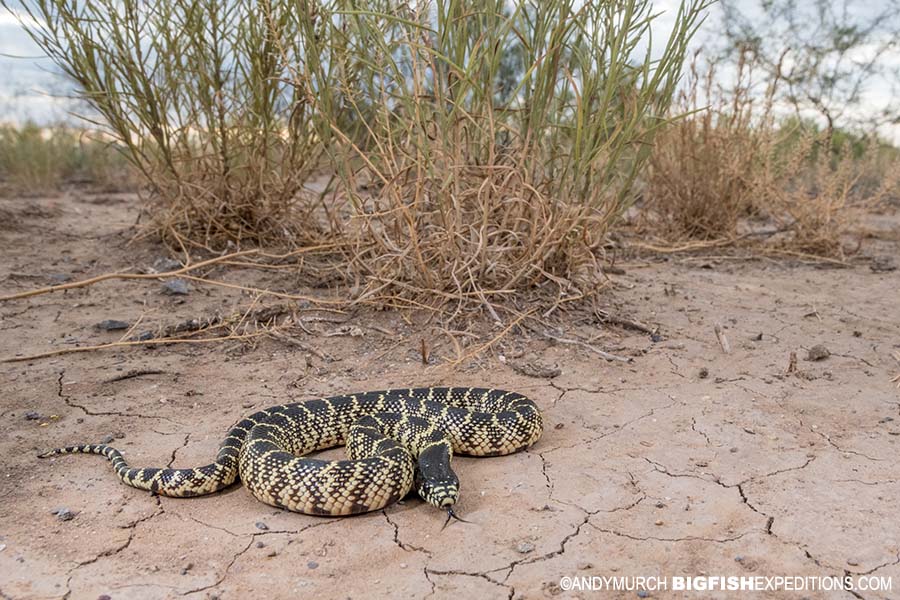 That pretty much sums up the action. All told we saw eleven species of snakes (alive) and photographed nine. It was a phenomenal adventure and one that I am excited to repeat!

Consequently, I am happy to announce that Todd has agreed to lead a guest trip for us next August. Due to a number of factors, the exact dates of the trip cannot be set until the end of January but we are taking bookings now for guests that have a flexible schedule. Join our 2020 Southwest Snakes Expedition 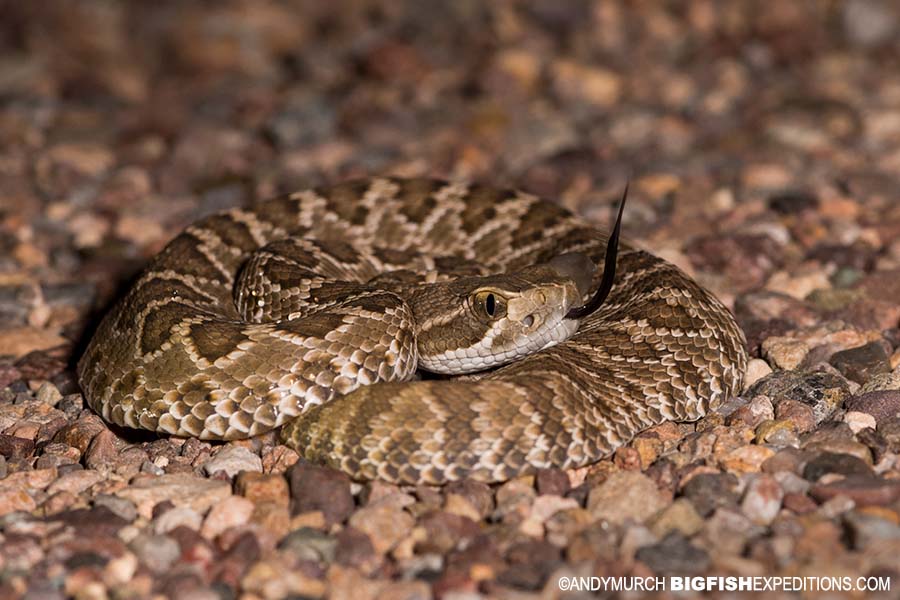