A fantastic week among polar bears on the Canadian Tundra!

Between the plentiful bears, red and silver foxes, and other arctic wildlife, the photographic opportunities this week were unparalleled. It wasn’t just the amount of bears that made this trip special; it was the ‘next-level’ quality of the encounters. We travelled in a small four-wheel drive vehicle, so we were able to move around the tundra whenever and wherever we wanted. This allowed us to get much closer to the bears than on regular bear watching tours and we were able to pick the optimum angle of approach so that the bears were always perfectly lit by the low winter sun. 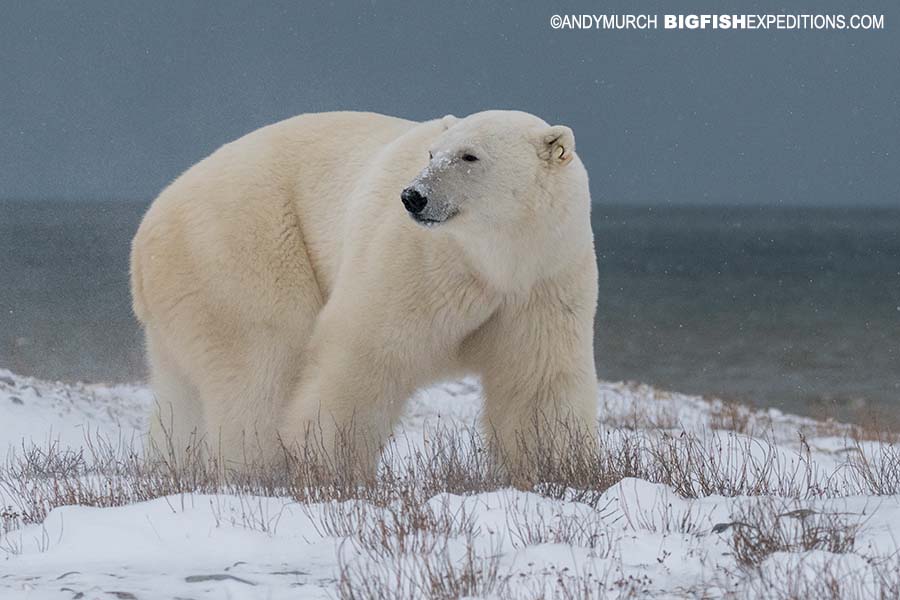 Perhaps more importantly, because we were not stuck in a 14ft high tundra buggy, we could exit our vehicle (when it was safe to do so), and set up compelling low-angle shots from the bear’s eye level. 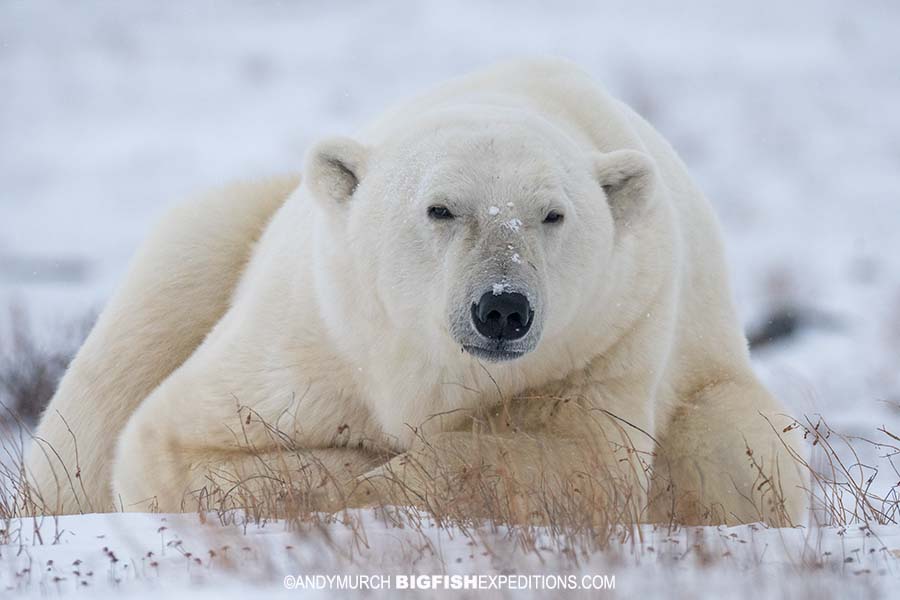 When we arrived in Churchill, the ocean was completely devoid of ice but the amount of bears gathering along the shoreline was a clear sign that the winter freeze was imminent. Polar bears are usually solitary animals. At one point we could see eight bears in relatively close proximity to each other but they remained far enough apart to avoid conflict. When a young male wandered too close to a much older rival, a short sparring match ensued.

The males circled each other; rearing up now and then to try to intimidate one another. Surprisingly, it was the older male that eventually backed down and headed off to find a quieter spot to wait for the freeze. 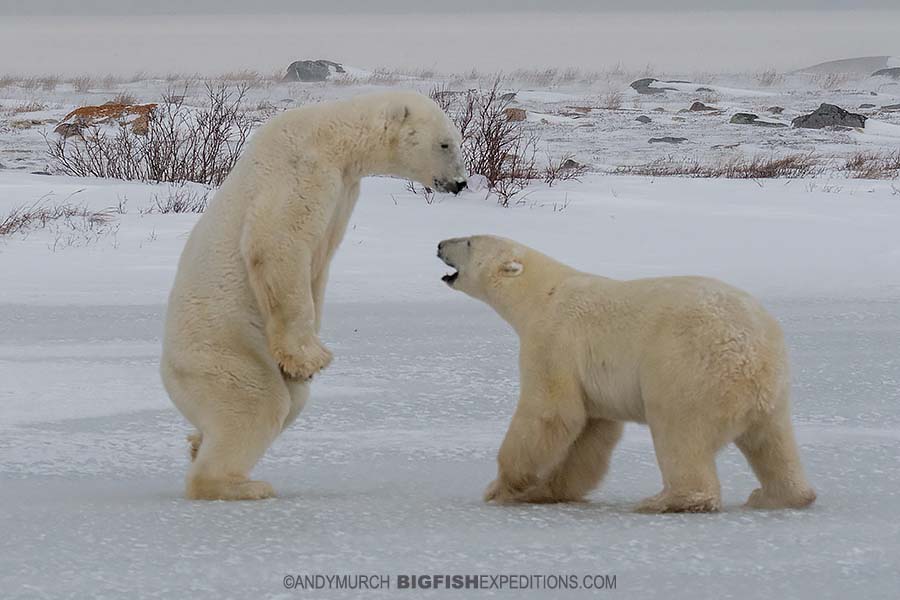 Watching sparring bears was definitely a highlight of the trip but our favourite encounters were with mothers and their insanely cute cubs. One family in particular were extremely tolerant of our attention so we spent many hours following them around.
I should point out that the mom in this picture is yawning which is a sign of stress, but she was very relaxed around us. There was a large male bear nearby so she was more concerned about him. 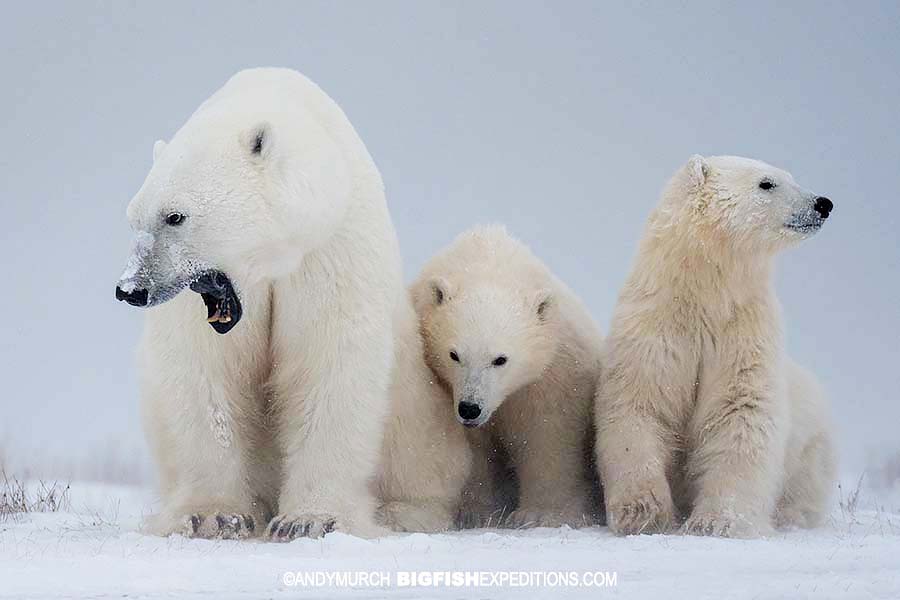 The mother remained ever vigilant for solitary males that would not think twice if they thought they had a chance to grab a helpless cub. Just before the freeze, the bears are at their hungriest because they have not been able to sate their appetites since the spring thaw. Polar bears mainly prey on seals and other marine mammals. During the warm summer months, their metabolisms slow down but by the time the ice begins to form, their desperation for a decent meal is palpable. They will also kill cubs in order to bring the female back into her breeding cycle, so any moms that have cubs with them, have to stay on their guard at all times. 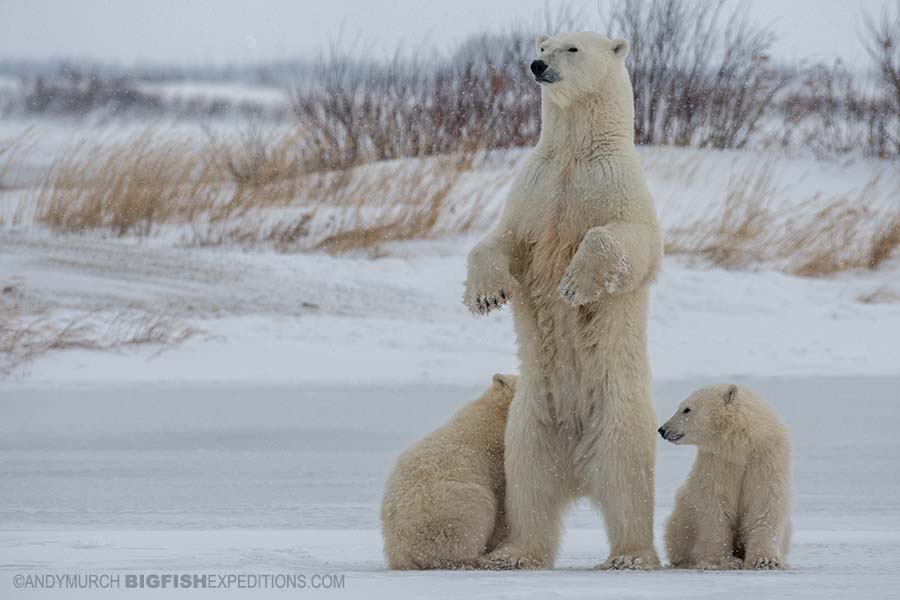 Cubs in their first year are called ‘coys’. That first twelve months is an important time for cubs to fatten up on their mother’s milk and learn all the skills that they will need to survive once their mom eventually chases them off. Fortunately, life as a young cub isn’t all hunting lessons and evading predatory males. There is still time to play in the snow now and then. 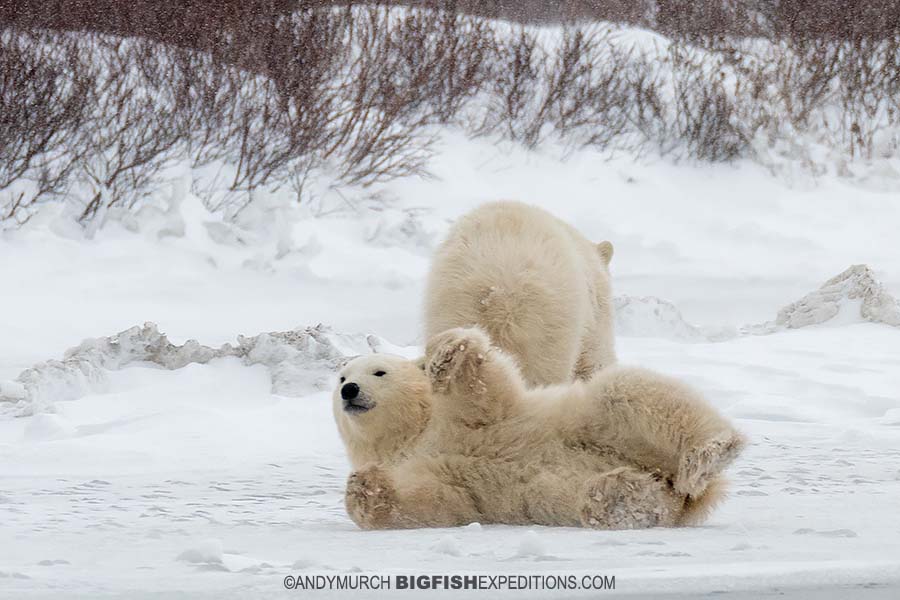 The weather on the trip was generally good except for a snowstorm that lasted for around 1.5 days. During the storm we were still able to head out to photograph bears as they walked across the tundra. When the wind picked up, the temperature plummeted but the bears seemed relatively comfortable in conditions would freeze an ill-prepared human within a few minutes. 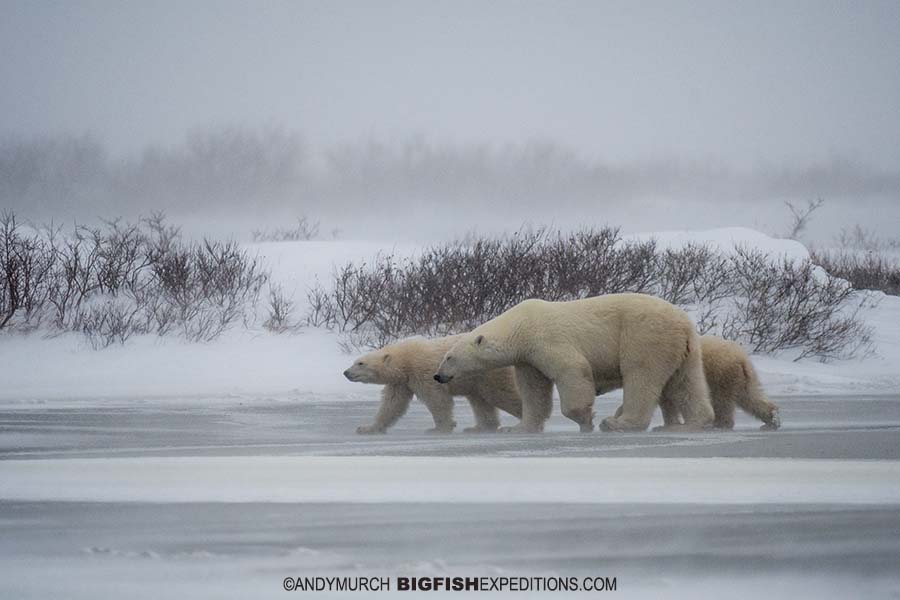 After the storm, the skies cleared and we took a break from bears to look for foxes. We did not find any arctic foxes but red foxes were all over the place. Now that the sub arctic has started to warm up, red foxes, grizzly bears and other southerly species have begun pushing northward. That is bad news for arctic foxes which are generally smaller than their southern cousins and are easily outcompeted.

Still, the red foxes stood out dramatically against the snowy landscape and made for some lovely portraits. 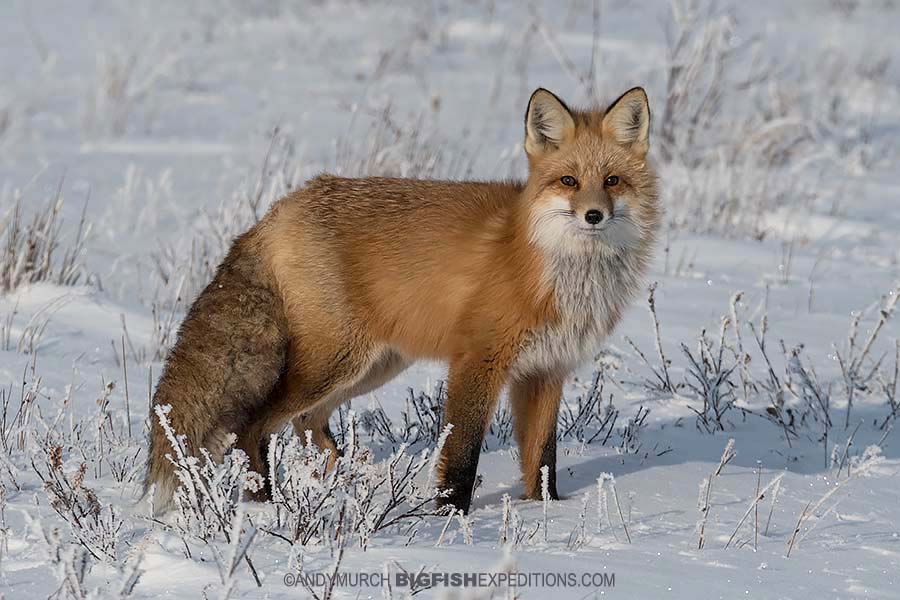 During our ‘fox hunts’, we managed to locate a stunningly beautiful silver fox. This is a rare dark colour morph of a red fox that is only found in the far north. It was the first one I have seen in the flesh and when the sun glittered on it’s white-tipped black fur, it was a sight to behold! 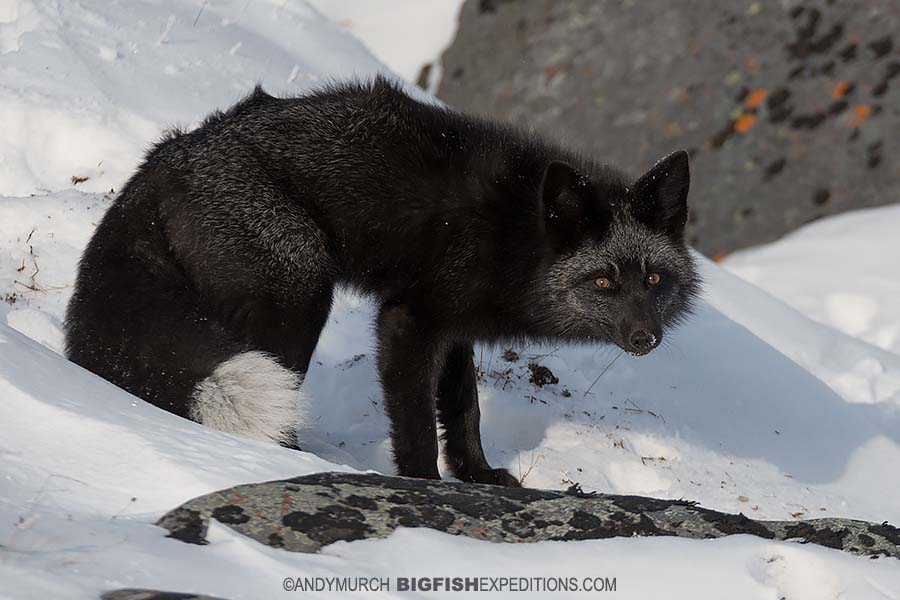 We also stumbled upon a few arctic hares, one of which was extremely bold; allowing me to crawl right up to it in the snow for some close-up portraits. 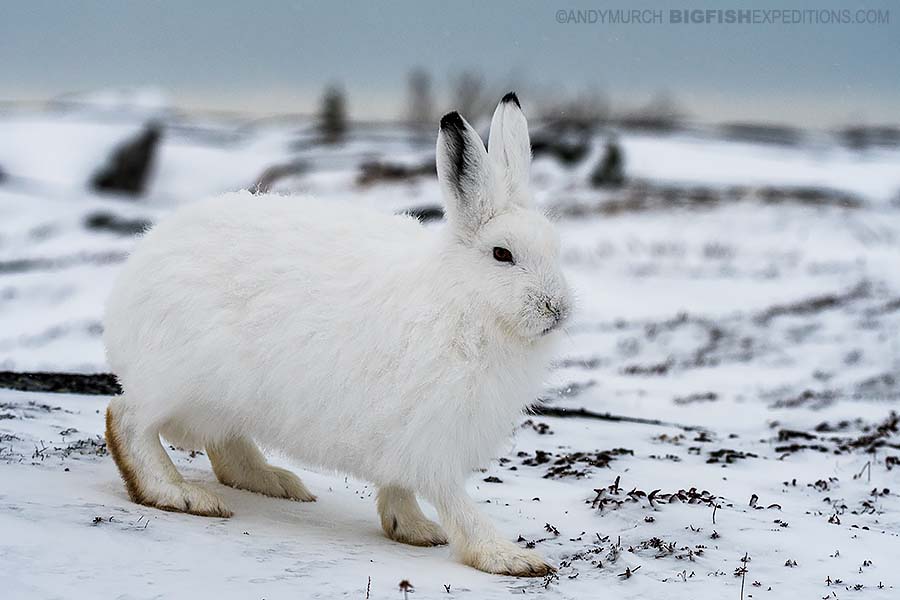 Towards the end of the week the air temperature dropped to a chilly -25ºC. That was just enough to push sea temperatures below -2ºC; the point where seawater begins to freeze. It was fascinating watching the transition as the ocean first turned to slush and then solidified enough for the bears to head out for their first hunt of the season. The males went first while the moms and cubs hung back a little longer to stay clear of danger. 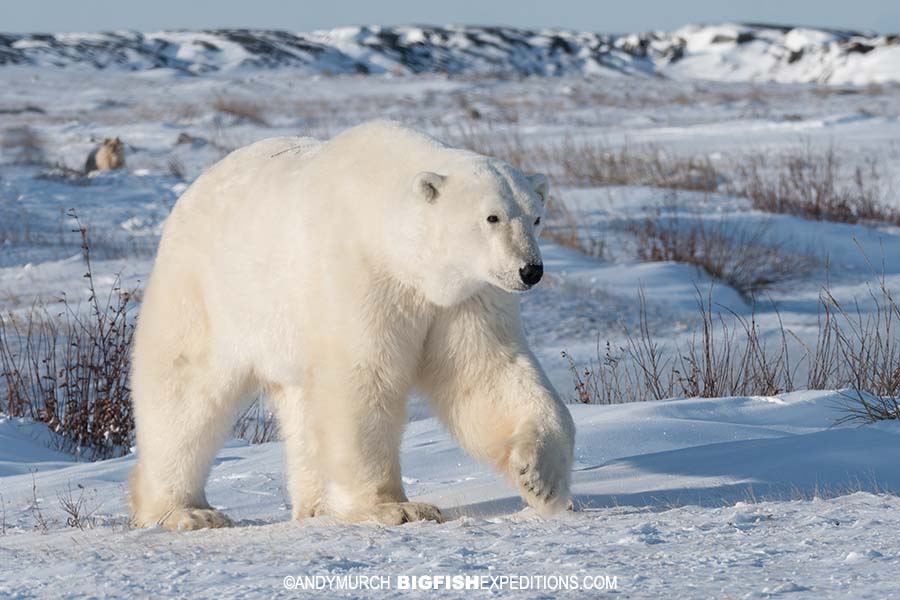 On our last day there were still moms and cubs along the shore but all of the solitary males were gone for the season; we had timed our trip to perfection!
Next year we will return at the same time to witness the polar bear migration again. We only bring five guests in order to keep the bear encounters very relaxed and intimate, if you would like to join us, please let us know: Polar Bears of the Canadian Tundra 2020.