Belugas and Polar Bears 2016 in a Nutshell: WOW! 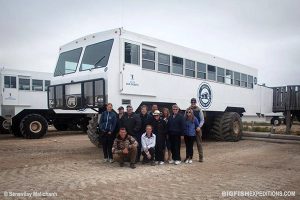 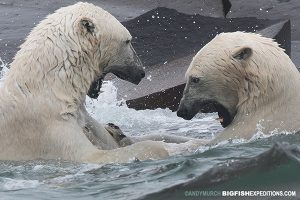 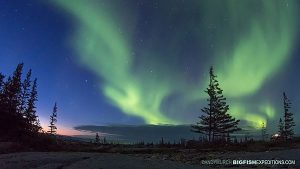 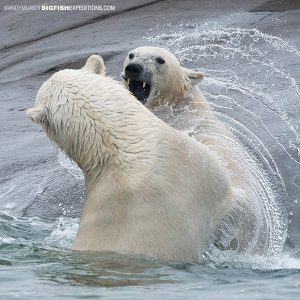 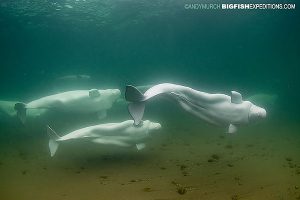 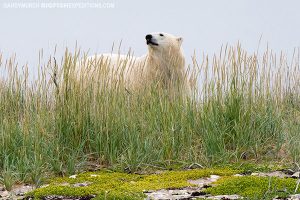 Polar bear in the grass 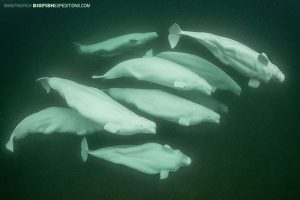 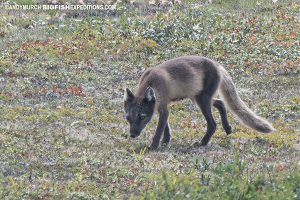 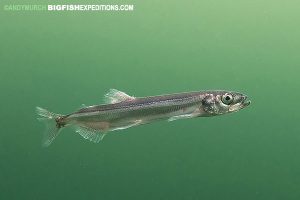 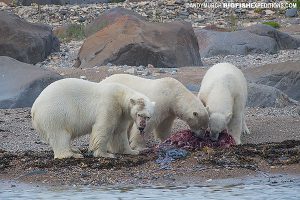 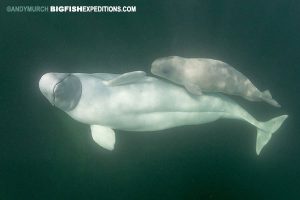 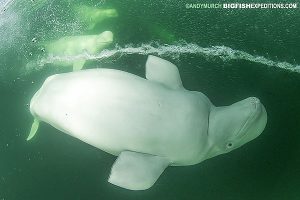 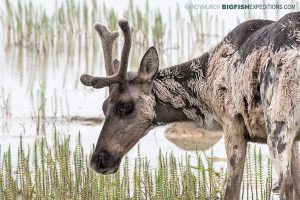 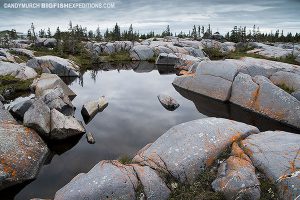 This year in Churchill we enjoyed consistently good snorkeling with large pods of friendly beluga whales and off the chart encounters with polar bears.

Not only was the visibility exceptionally good, it seemed as though the belugas were even friendlier than in previous years. For example, each day that we were in the water, we had very close passes from beluga mothers with newborn calves. It is a very special feeling to be trusted enough by a cetacean to let you get within touching distance of their precious offspring.

Visibility is always a concern when you’re snorkeling in a river mouth but this year the water was extremely clear. So clear in fact, we were able to photograph pods of belugas swimming over the seafloor 20ft/6m below. 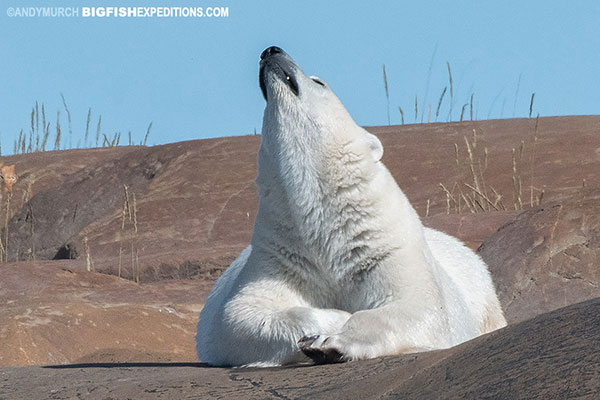 A Feast of Capelin

The belugas congregate at the southern tip of Hudson Bay for a number of reasons. The protected waters attract very few large predators so its a relatively safe location for pregnant belugas to give birth to their pups. The belugas also travel south to consume enormous quantities of capelin; a small slender fish that forms massive schools that blanket the sea floor.

And lastly, the belugas rub themselves on the shallow seafloor and rocks to slough off a layer of skin. Once all of these activities have been completed, they make a hasty retreat back to the open ocean in the north before the ice sheets form over the bay. Any belugas that don’t make it out of Hudson Bay before the freeze will either suffocate or be forced to breathe from seal haul out points and other natural gaps where the ice doesn’t form. When belugas are confined to a breathing hole, they are easy targets for polar bears. Not surprisingly, by mid August, most of the belugas are already on their way north.

The bears wait for winter to head out onto the ice to hunt. During the summer (when we are there) its unusual for the polar bears to eat any food at all. Overheated and undernourished, they can often be seen lounging around on the rocky shoreline or cooling off in the water.

This year we were treated to two fantastic spectacles that we didn’t expect. On our first week, a beluga carcass washed up on the shore line near Eskimo Point – a favorite summer haunt of polar bears.

Its not clear why the carcass appeared. The unfortunate beluga may have been killed by a bear but its likely that it was shot by an Inuit hunter and the mukluk (skin and blubber) harvested to feed their dogs. The remains of the carcass probably floated around in the bay until a bear smelled it and pulled it out of the water. However it got there, the resulting ‘feast of the polar bears’ was a sight to behold!

For two days there were at least eight fully grown ice bears munching on beluga meat. We witnessed lots of challenges during which two bears would growl and snap at each other until one would back down and let the other take over the carcass. At one point we had four bears eating together until they completely ripped the beluga in half and went to different ends of the beach. It was a very special occasion that we all felt privileged to have attended. 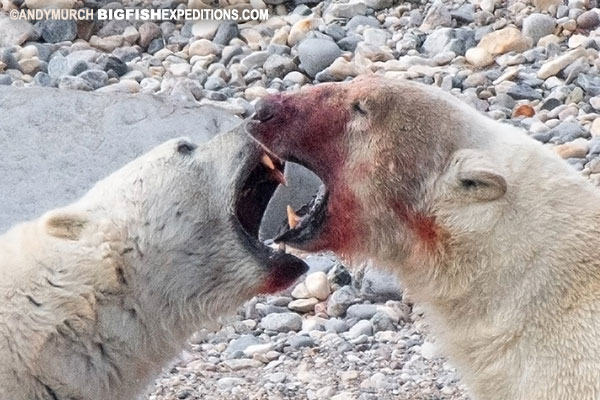 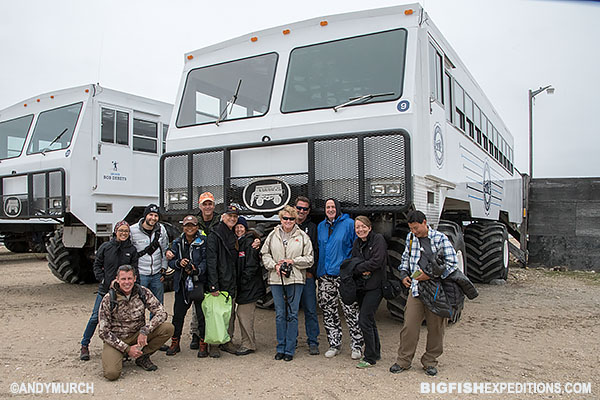 By the time our second group arrived, the remaining pieces of the carcass had been completely consumed or perhaps dragged away to be savored at leisure. The guests were disappointed to have missed the show but there were still plenty of bears around and some of them were quite active.

Sometimes we found bears wandering through the tall grass along the shore looking for tern nests that had a good supply of eggs – barely a snack for a hungry bear but better than nothing.

Then, on our third day of week two, we stumbled upon another amazing sight; two full grown polar bears wrestling in the water together. Although they looked quite ferocious at times as they swatted and lunged at each other, it was clear that they were play fighting. Battles for supremacy do not take place in the summer heat and the bears were obviously enjoying themselves. Regardless, the resulting images and video were very dramatic!

Each afternoon, we drove out of Churchill to explore the rugged beauty of the tundra landscape. From the reactions of our guests, I think everyone fell under the spell of the untouched wilderness.

As well as exploring the tundra during the day, the vehicles also came in handy for watching auroras during the extremely short sub-polar nights. Under the cover of darkness, we waited for solar storms to reach the atmosphere and then rushed out of town to enjoy the spectacular light show.

Wildlife on the Tundra Buggy

On the last day of each week, we abandoned the belugas and boarded the tundra buggy – a 12ft/4m high vehicle that is capable of reaching remote places that we could not have reached in our trucks. We saw caribou, more bears and even a snowy owl but the highlight of the day was an encounter with a family of arctic foxes. Although the foxes are white in the winter, they grow a thin grey-brown coat in the summer that helps them blend into the landscape while they are hunting.

All told, it was a phenomenal couple of weeks in northern Canada. Both the beluga and polar bear interactions were our best yet. Next year we will be back again to enjoy more great encounters. Join us there! 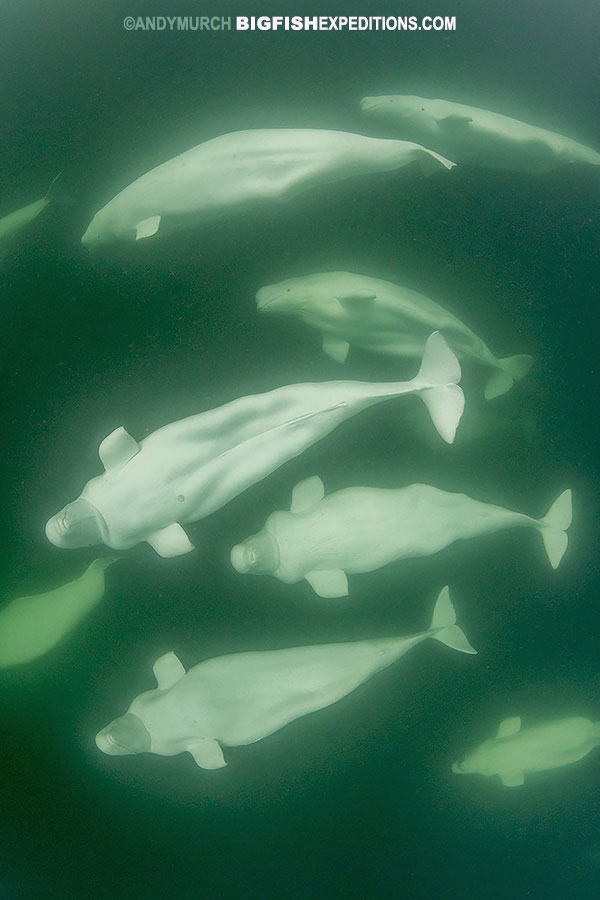