Our Arctic adventure began in Tromsø, 217 miles (350 kilometres) North of the Arctic Circle. Surprisingly, the temperature was a comfortable 3˚C (37.4˚F) with a promising week’s weather forecast ahead of us as we boarded the MS Sula, our home for the week’s trip.

At this point, it’s fair to state that no one has ever described the MS Sula as luxurious. However, what the vessel lacks in refinements, the 90 foot ex-fishing boat more than delivered in warmth and character. Food aboard the Sula was exceptional, prepared daily, the soups and hearty meals were very welcome after hours snorkeling in the chilly Norwegian fjords. When not on deck or in the water, the Sula’s large communal lounge was our cozy place of refuge. Tea, coffee, biscuits and other naughty goodies were available 24/7. For the saints amongst us, fresh fruit was available. The lounge was often our command centre, the place in which we made plans, reflected on the triumphs of the day, sat quietly processing images or sang silly songs. As they say ‘what happens in the lounge, stays in the lounge.’

Day’s are short in the Arctic during the winter months, first light was from 9.30am and was often gone by 2.30pm. Due to it’s extreme latitude, the area we searched for orcas meant that we never saw the sun hiding just below the horizon. With only a few hours of light each day to operate, we needed to be organized. For logistical reasons, we split our small team into two smaller groups. Only one group would engage the orcas at a time increasing opportunity, whilst the other group took photographs from the comfort of the Sula’s deck, bridge or bow. The boat’s crew are incredible and operate like a Swiss watch, transitions for the two groups were perfectly synchronized and downtime was minimized to only a few minutes when snorkeling with the orcas was a priority. 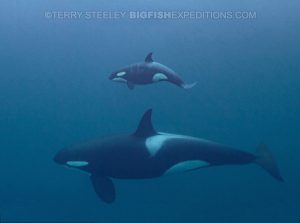 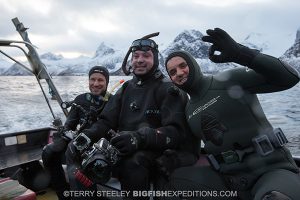 diving with orcas in the fjords of NorwayPhoto © Terry Steeley 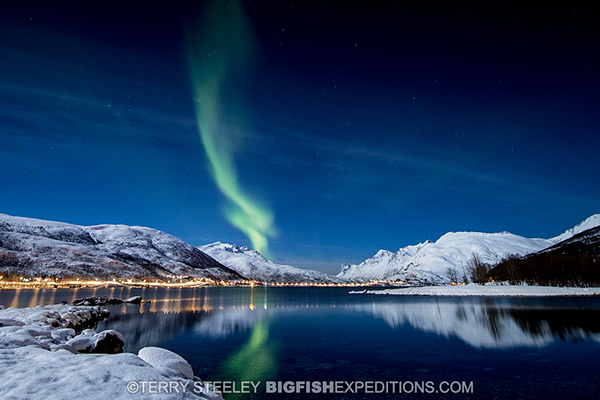 Throughout the week we enjoyed wonderful encounters with nature. From the moment we departed Tromsø early on the first day, we successfully found a pod of orcas after only a few hours of exploring. They were joined by numerous humpback whales, and we observed them all to assess if they were receptive to us snorkeling alongside them. Spirits on the Sula were high, it gave us a really good feeling for our trip to have found a pod so quickly. On this occasion, the orcas were focused, fast moving and clearly not in a playful mood. We enjoyed the moment and pushed on to find another pod to enjoy.

Later in the day, we found a second pod of orcas that were much more relaxed. The day’s light was fading meaning it was impractical to join them in the water, but we had located a chilled group and we relished the opportunity to watch and make photos from the Sula’s deck. Norway’s fjords are stunning, snow capped mountains, soft light, orcas, humpbacks and pilot whales in the foreground, it was a picture postcard before our eyes.

Many hours from Tromsø, we decided to stay local and moor in a nearby harbour. Staying close, we hoped would ensure that we could quickly find our pod at first light. The next day revealed our plan was a huge success, our chilled family of orcas remained in the area overnight. In the following days, this approach of following and mooring nearby soon became our ‘modus operandi’, it proved very rewarding and delivered countless extraordinary moments.

In the days that followed, the in-water orca encounters we shared were incredible and regular. Under the guidance of the Sula’s team we were frequently placed carefully alongside orcas and on occasions humpback whales too. Following the USEA (Undersea Soft Encounter Alliance) guidelines we respectfully enjoyed intense and emotional encounters. We never forced the interaction and the animals were always free to leave if they ever felt uncomfortable. To many, the suggestion that we would swim parallel to the pod, and when the time felt right, display our belly to the orcas might sound bizarre. However, by demonstrating our submissive nature we were often welcomed and rewarded with magic.

Amongst the countless highs of the trip, there are two moments that will stay with me indefinitely. My most cherished memory was having a mother move her young calf to swim close to me. In this minute, I experienced a wonderful connection and appreciated the huge trust the parent offered. My second breath-taking point was free-diving in amongst the herring whilst the pod of orcas fed from the bait ball. At no stage did I feel threatened, just an overwhelming sense of calm and amazement. 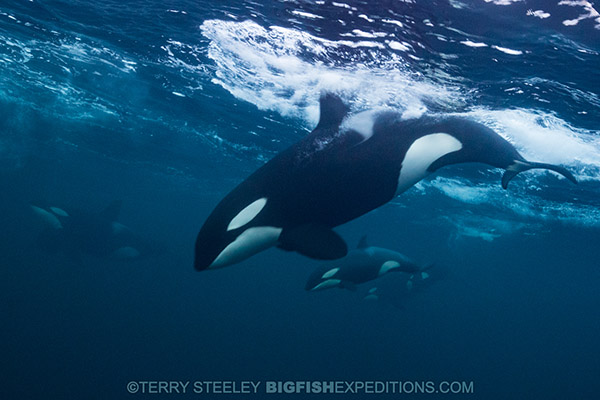 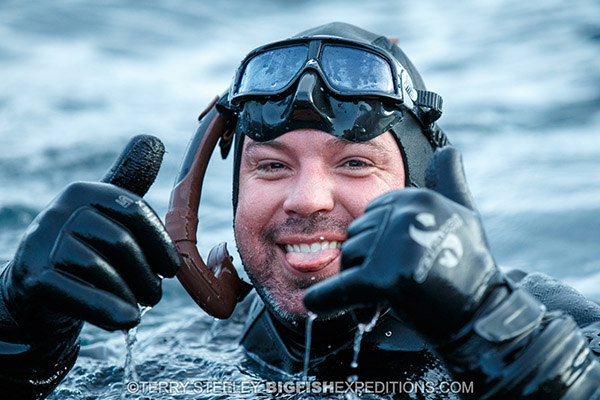 Throughout the trip, all of the guests experienced phenomenal experiences. Here are a few quotes shared shortly after their encounters.

“I was involuntarily crying and smiling when I first saw them. There are no words. I’m never leaving. Ship me my dog.” Natalie

“The most amazing thing I have ever done! To witness Orcas & Humpbacks eating together in their natural habitat was mind-blowing.” Celia

“Incredible! While we were in the water a dozen orcas and three humpbacks all feeding on the same bait ball at the same time. Far exceeded all expectations.” Chris

“This was an amazing encounter with mother nature’s largest predator. I LOVE this trip!” David

I could conclude this trip report right here, but it would be amiss to neglect the ritual of the Norwegian hot tub and the amazing Northern Lights.

Heated to a toasty 30˚C+ (86˚F), each guest appreciated the opportunity to savour time in the communal bath after a day snorkeling beside the orcas in the icy cold fjords. The ritual of the Sula’s hot tub suggests that after the pleasure of the warmth, one should also enjoy the cold. Therefore, we began a cycle of warming our chilly bones before leaping into the fjord nearby and quickly returning to the comforts of the tub.

Winter in the Arctic Circle also means the opportunity of Northern Lights (Aurora Borealis) and we were not to be disappointed. The sun constantly releases electrically charged particles that collide with the oxygen and nitrogen gases of our Earth’s atmosphere resulting in spectacular night sky light shows. These wondrous displays are only visible during the dark Winter nights. We monitored the evenings closely and on clear nights we would leave the Sula and move away from the light polluted harbours to enjoy another of mother nature’s treats.

In conclusion, the 2016 Orca expedition was an outstanding adventure. It ticked the lifetime ambitions and bucket-lists of many guests, provided the exceptional privilege to swim alongside the oceans largest predator, delivered countless breath-taking moments and forged friendships that will last a lifetime.

Next year we will return to the crystal clear fiords of Norway to snorkel and interact with killer whales. Nowhere else in the world can you enter the water with these amazing animals. This is a serious adventure for experienced snorkelers and free divers. 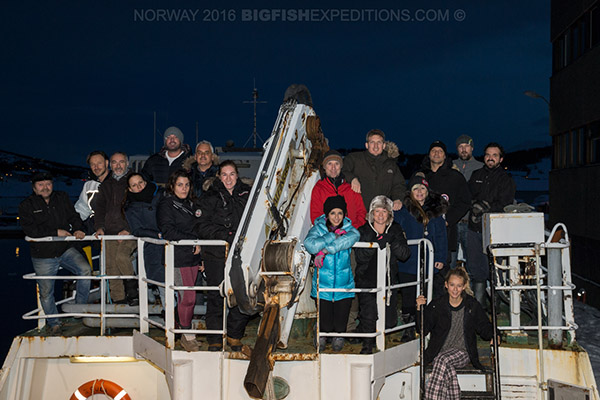