This year’s Silver Banks humpback whale adventure was off the chart! There was definitely no shortage of whales and some of the encounters that we enjoyed were the ones you wait a lifetime for 🙂 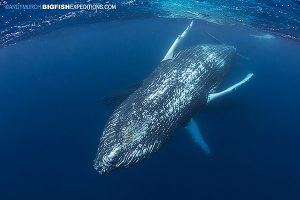 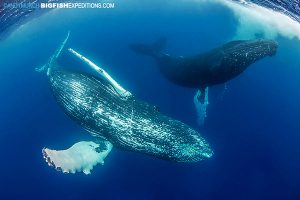 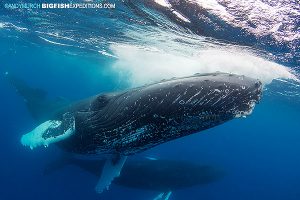 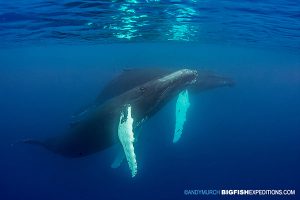 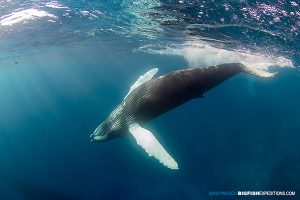 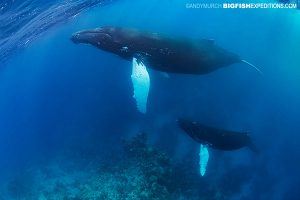 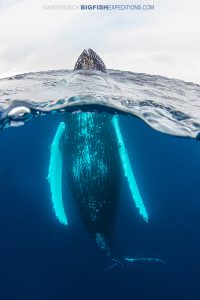 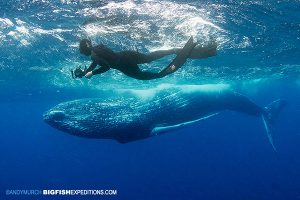 Diver with a humpback whale at Silver BanksPhoto © Andy Murch 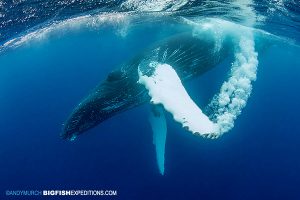 On a good week at Silver Banks you can expect to see quite a few different behaviors. Our week started with a group of rowdy males competing for the affection of the available females. You can’t get in the water with rowdies because it would be too dangerous but its a fascinating spectacle as they breach, tail slap, lunge at each other and blow long intimidating bubble streams.

Next up were the sleeping giants. A great way to get close to humpback whales is to slip into the water when they’re resting. During their afternoon naps, humpies surface to breath every 18-20 minutes. When they settle back down they don’t go very far so its easy to catch up with them and then watch them laying motionless on the shallow sandy seafloor. As long as you’re quiet, you can fin along next to them when they finally surface for their next breath. It’s a wonderfully peaceful way to spend lots of time in their presence.

While half our group was communing with the sleeping whales, our other chase boat stumbled upon a friendly mother with an extremely large and boisterous calf. While momma rested, the calf (that we nicknamed Thumper) swam excitedly up to our snorkelers and spent over an hour spy-hopping, breaching and slapping its fins, as if to say, look what I just learned to do!

Every seven minutes or so, momma rose to breathe right between the enthralled snorkelers. She never once showed any concern, so – following its mother’s lead – her calf didn’t show any fear either. A great example of how trusting some cetaceans can be when they are not feeling threatened. 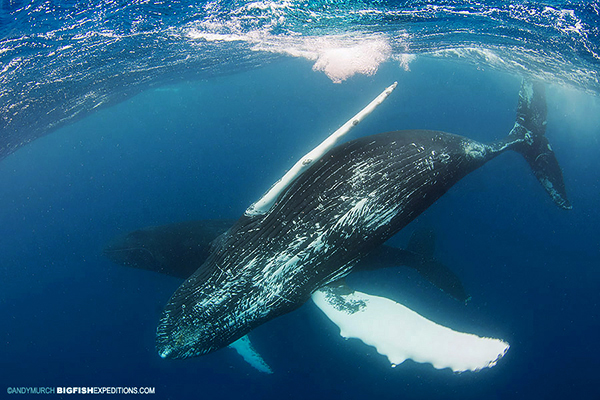 The next morning we chased more rowdy males and slipped in with another pair of sleepers. Interestingly, humpbacks always snooze in twos.

The week was going rather well. No one would have complained if it had continued that way until it was time to head home but on our third day in the water, something extraordinary happened…

Once or twice each season, a group of lucky divers gets treated to a valentine. A valentine is when a mature female humpback actually seeks out contact with humans. No one is exactly sure why they do this. Likely, the whale has either just mated or she is about to and her hormones are running wild.

The result is an unforgettable encounter where she swims around and around the boat (or the snorkelers) at very close quarters. Her pupils dilate and she rolls around at the surface with her pectoral fins outstretched.

Sometimes her euphoria can make her clumsy and unintentionally dangerous but on this occasion, her and her male escort were extremely gentle; lifting their fins over nearby snorkelers and avoiding any forceful physical contact.

Periodically, both whales rose to the surface and pushed their noses skyward. This is called spy-hopping even though their eyes do not necessarily break the surface. Humpbacks have sensitive hairs on their chins that are able to smell – or perhaps taste – the air around them. Maybe the whales were ‘high’ on pheromones and lost in the sensory overload of the moment. We’ll probably never know what the whales were really feeling but the minds of the snorkelers were much easier to read. Everyone in the water was utterly ecstatic!

The valentine lasted most of the afternoon. During that time the whales never left our side for more than a minute or two. Eventually it was our boat captain who called off the encounter fearing that we would not make it back to our liveaboard before sunset. We had drifted a long way from the anchorage over the course of the afternoon and there were treacherous shallow reefs between us and the mother-ship that would become increasingly hard to navigate as darkness fell.

On the way back to the Aggressor we relived the encounter and that night we celebrated our good fortune. 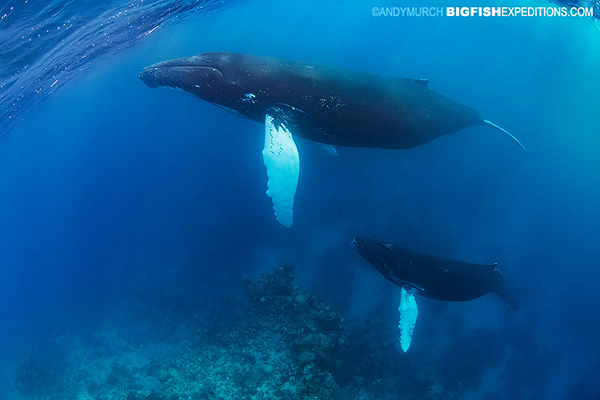 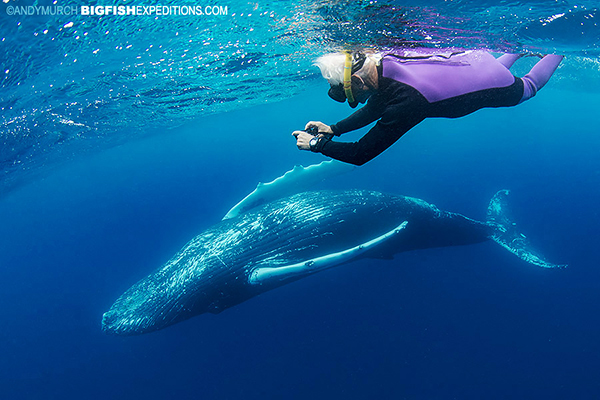 Before returning to the mainland, we had one more mind warping encounter. After a long and largely fruitless morning of searching for mothers with calves to interact with, we came across a singer. This is a male humpback that rests head down in the water, broadcasting whale song for miles around. His voice was so strong that we could hear his haunting melody even above the water. Once we dropped into the ocean, his baritone notes resonated through our whole bodies. It was as unforgettable and it was awe inspiring.

Long before any of us were ready, we arrived back in the real world. Stepping off the ship, I felt my connection to the whales weakening but as I write this trip report a month later, the memories and emotions are quickly flooding back. It really was an unforgettable week.

I don’t know if we will ever be able to top that journey among humpback whales but I’m looking forward to trying. Join us on our next expedition to Silver Banks in 2019: Silver Banks Humpback Whale Diving Expedition