Although we didn’t see them everyday, when the salmon sharks were around we had players that came right up to us. The biggest challenge was the visibility. After a few days of rain, the clarity of the surface zone made it difficult for us to shoot and equally difficult for the sharks to chase the bait. Fortunately, some sharks came so close that it was still possible to snap away and one even swum through the legs of one of our guests. A little closer that he expected! 🙂

The sharks have this strange habit of swimming in lazy circles with their dorsal fins out of the water. Why exactly they do this is not clear but we suspect that they come to the surface on sunny days to warm up. That still doesn’t explain the circling which is not the most efficient way to conserve energy if all they are doing is resting while they warm their core temperature. Hopefully, we will learn more about them in future seasons.

The sharks surface and descend on their own schedule. While we were waiting for them to make an appearance each day, our host Boone Hodgins – owner of Ravencroft Lodge – entertained us by attracting eagles. Watching the resident bald eagles chasing each other across the sky or swooping down to grab fish in their talons was a very entertaining distraction not to mention a great photo opportunity. 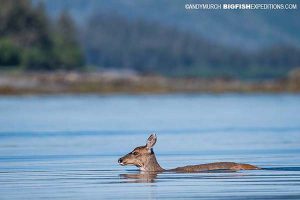 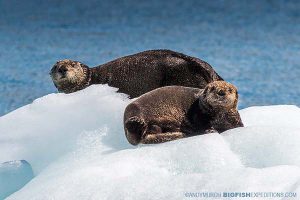 Sea otters on an iceburg in AlaskaPhoto © Andy Murch 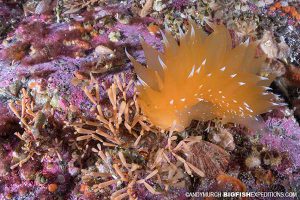 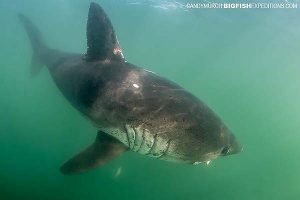 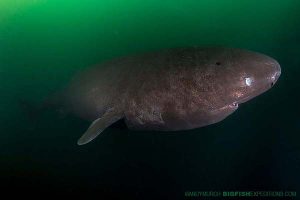 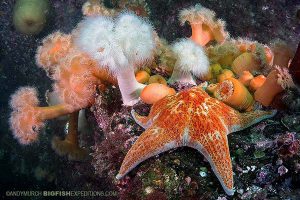 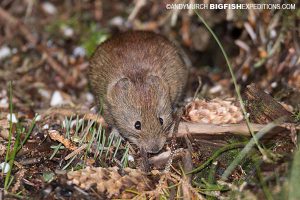 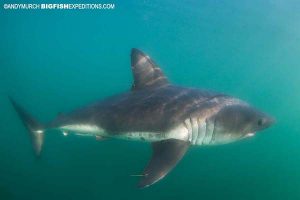 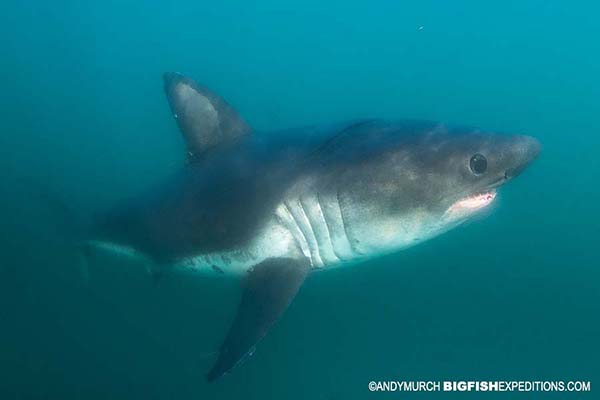 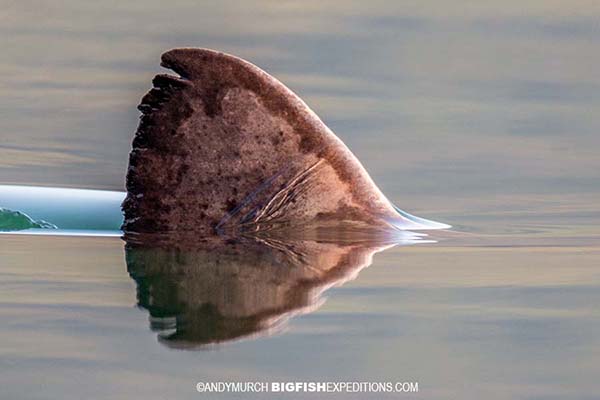 One morning while we were out looking for salmon sharks, we spotted a deer swimming across the inlet. This led to some interesting images of its progress until it climbed exhausted onto the far bank.
Port Fidalgo is roughly 3 miles from side to side. For a deer with tiny hooves and barely any body fat to swim such a distance in freezing cold water is an extraordinary feat.

Not surprisingly, by the time it reached the far bank it was barely able to stand and frothing at the mouth. We watched it from a safe distance so as not to spook the poor animal and after perhaps 30 minutes, it finally found the strength to move off into the undergrowth.

Numerous times each day we ran into sea otters hunting in the shallows or simply laying on the surface as if the water was not a frigid eight degrees Celsius! We also saw them lounging on icebergs on our way over to the lodge from Valdez.

Not exactly an apex predator but I think everyone got a kick out of watching the brave little voles hopping around the grounds of the lodge when we returned from sea for lunch each day.

I only saw one humpback whale in the bay but on most visits to Shark Alley we ran into small pods of Dals Porpoises. Even if we had been able to catch up to them, you are not allowed to jump in with cetaceans in US Federal waters and to his credit, Boone is a stickler for the rules.

Dals Porpoises are notoriously hard to get good images of because they barely exit the water when they swim. Or maybe I’m just making excuses for the crumby images I got 🙂

Each morning we looked for sharks and then went back to sea in the afternoons to enjoy some local diving. There was always a chance of a random encounter with a salmon shark on scuba but our diving excursions were more about exploring the local reef systems.

We dove rocky walls and sandy slopes, some of which were bristling with giant white plumose anemones. Every now and then we would stumble upon a patch of smaller orange anemones. There is something about the color orange underwater that sucks me in every time I see it.

Now and then we would see interesting nudibranchs on the reefs but the shallows were completely clogged with millions of hooded nudibranchs laying their eggs. How all of these nudis find their way to the same shoreline at the same time – and where exactly they all come from – baffles me. All I know is that they are a sight to behold!

Port Fidalgo is a bit of a backwater without strong currents so I would not call the reefs world-class but there are plenty of photo subjects for those that go looking. Here are some of the many animals to enjoy. 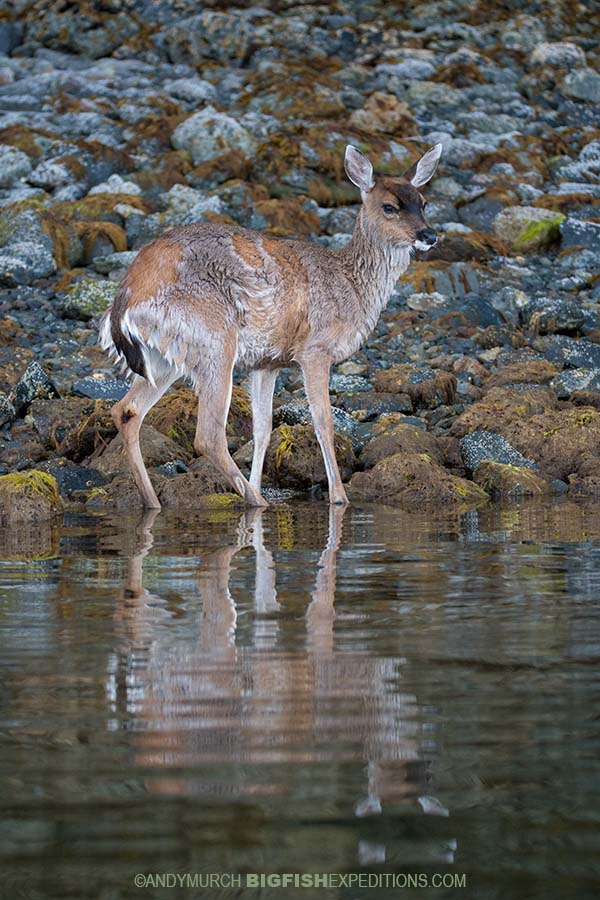 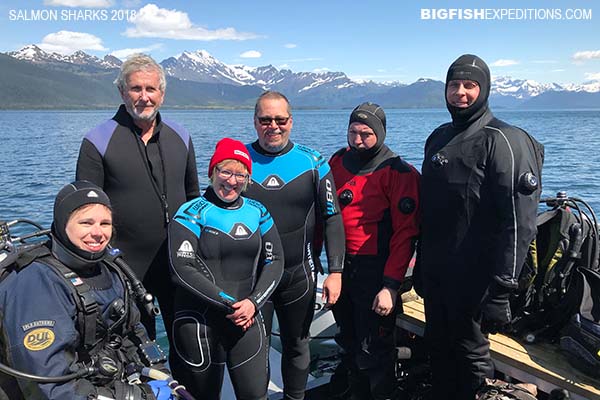 I have always wanted to see a Pacific sleeper shark. They are huge deepwater sharks closely related to the Greenland sharks that are found in the Atlantic.

In the North Pacific, sleepers often get caught on halibut lines but they live so deep that they are never encountered by scuba divers.

Boone is keen to see if they can be lured into the shallows so that divers can swim with them. It is an ambitious project! Being an expert fisherman, he initially brought one up on a line to see how aggressive it would be around divers. I was lucky enough to be in the water when this experiment took place.

The single shark that he brought up was about 10-12ft in length and extremely girthy. It paid little attention to me and made a bee-line for deep water as soon as it was released.

Sleeper sharks migrate into shallow water to look for food under the cover of darkness, so I suspect that is the only time they could be encouraged to frequent a particular spot where divers can see them. I’m looking forward to seeing how this project progresses!

Salmon shark diving is not everyone’s cup of tea. It’s cold, often dark and the encounters are sometimes brief so most divers opt for the tropics. Each to their own but this years divers never lost their enthusiasm and could not wait to get out to sea. You guys are awesome!