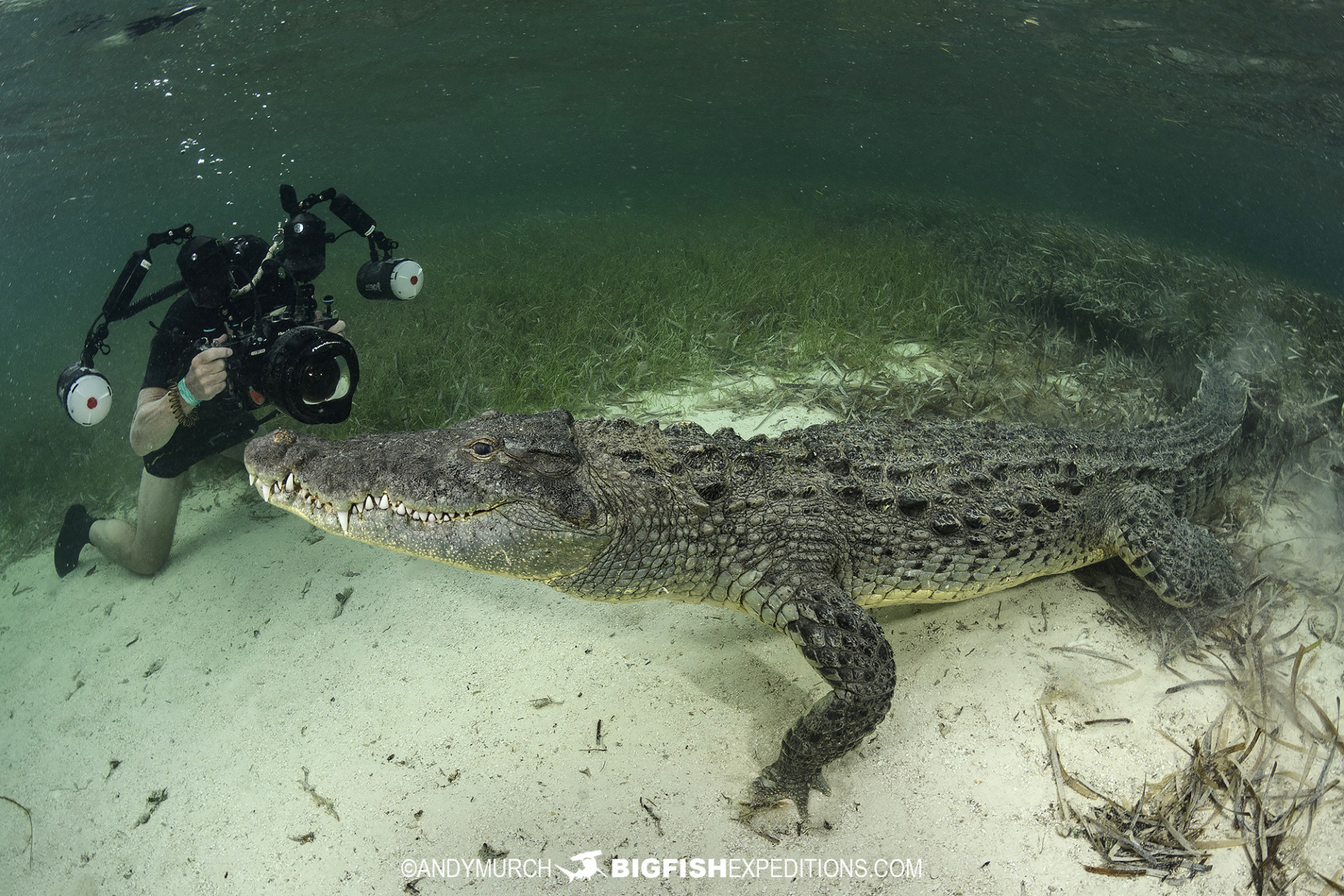 This year’s crocodile trip started strong with a manatee encounter at La Posa. Our croc encounters on the first day at Chinchorro Atoll were epic too. Plus we had great reef diving around the island, with nurse sharks cruising over gorgeous sponge reefs. All in all, it was shaping up to be another epic crocodile snorkeling trip, but then the trip went sideways. Read on and enjoy the highlights and share our frustration! 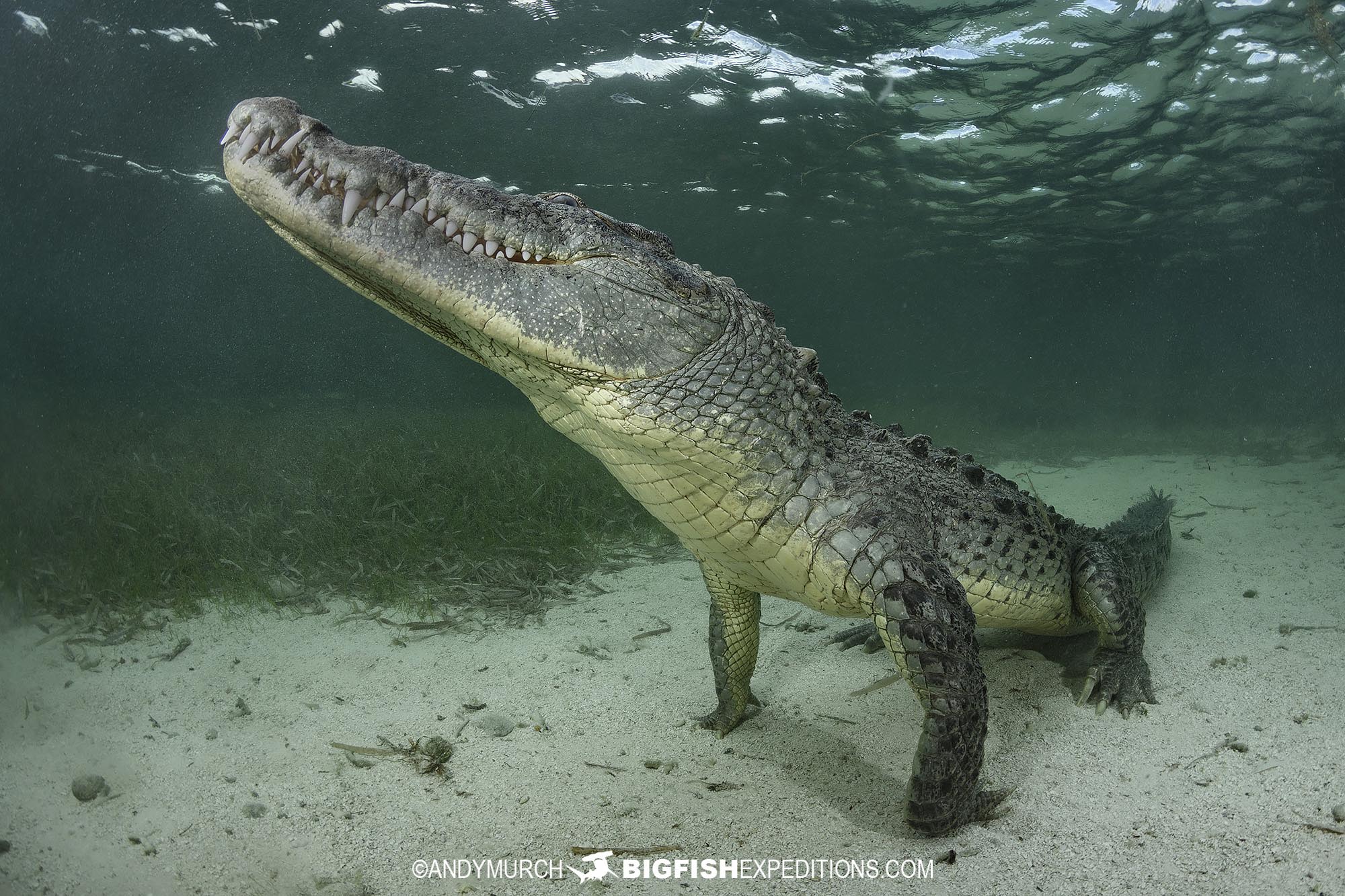 As usual, we met our group at Cancun Airport and transported everyone down to Xcalak; a small fishing village near the Belizean border, and the home of XTC divers, who we have worked with for many years, delivering one excellent crocodile trip after another. 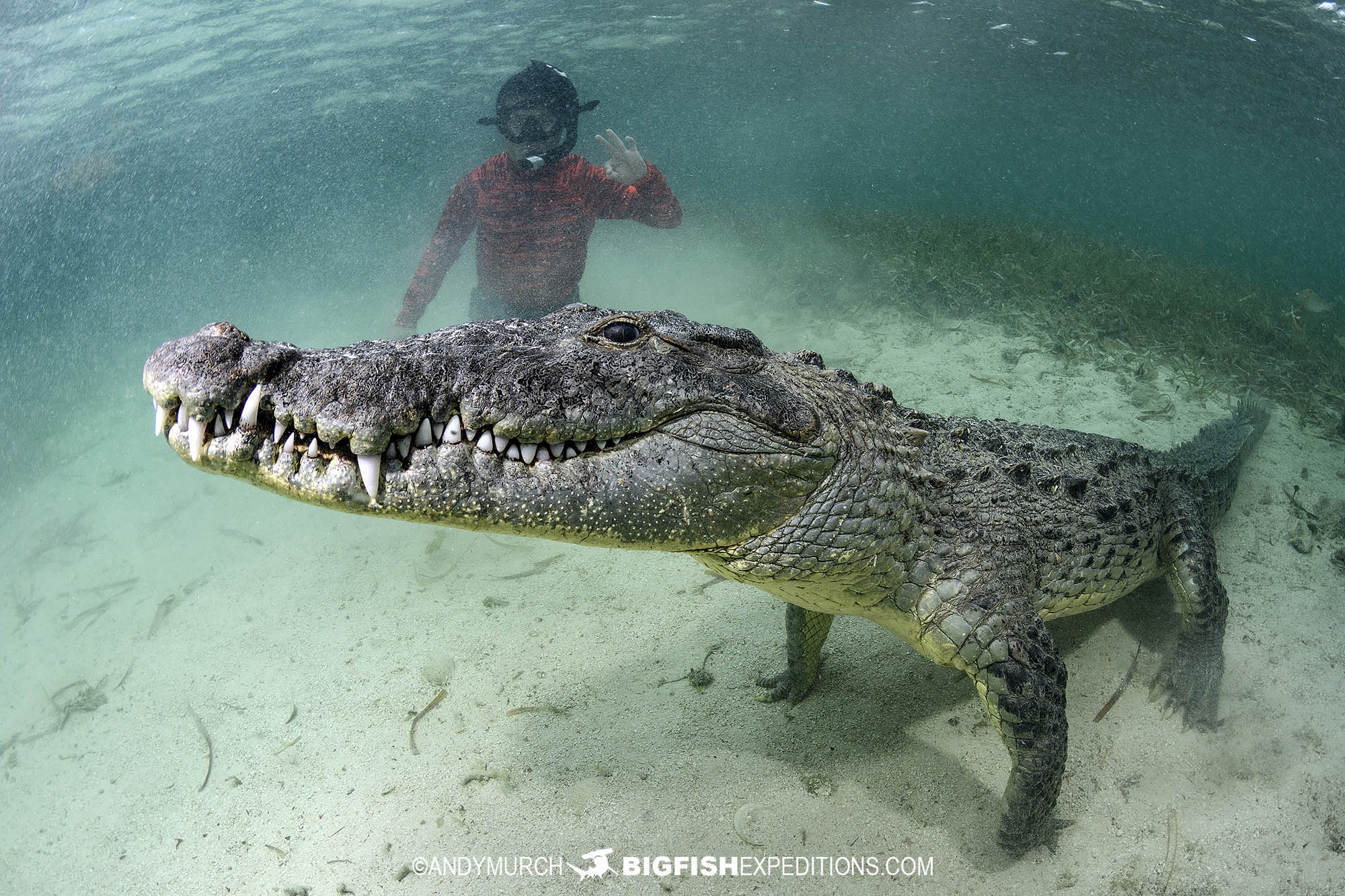 We did our first day of diving at a site called La Posa; a reef channel with a resident school of enormous tarpon. 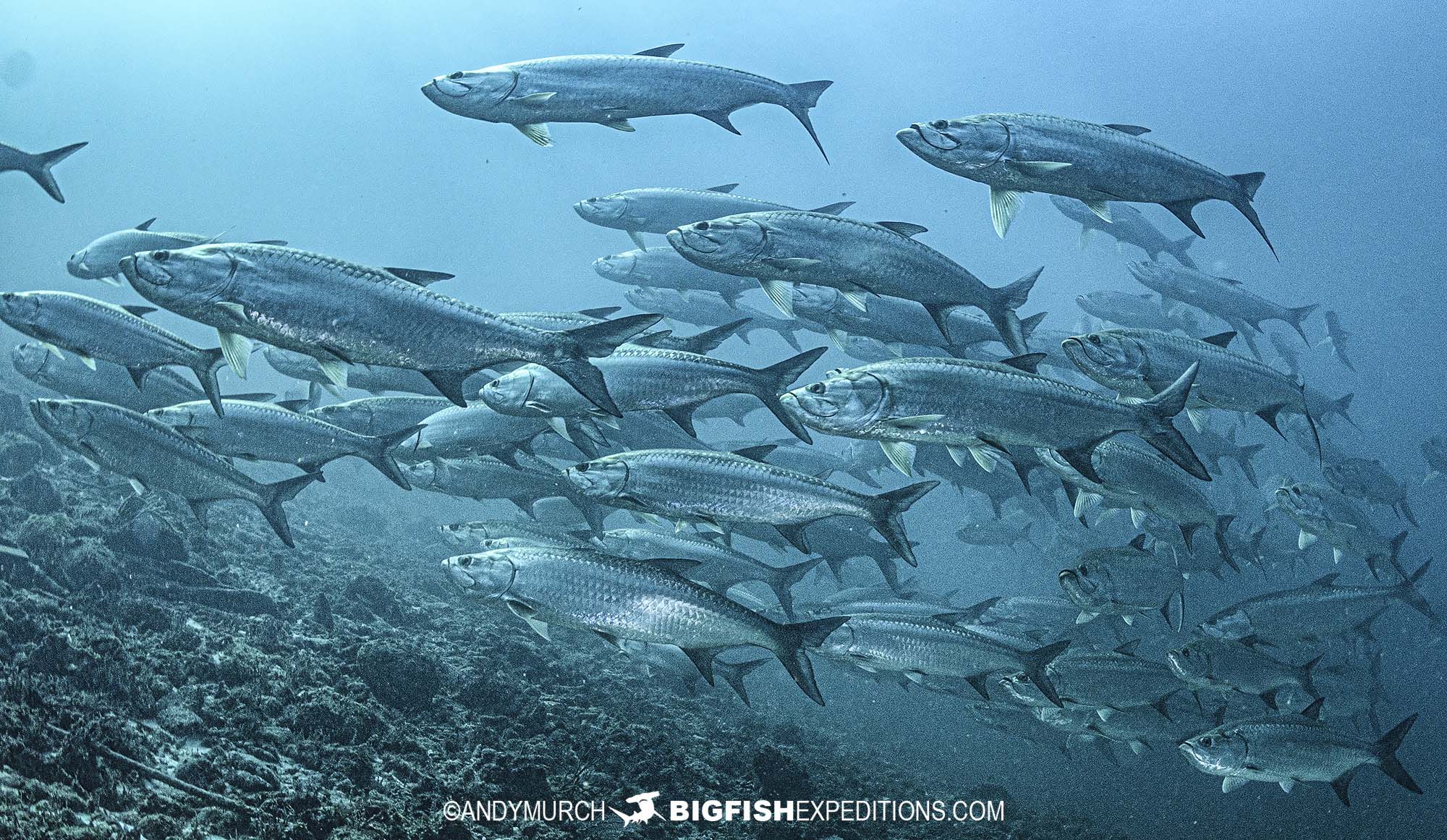 On one of our La Posa dives, we saw a manatee resting in the shallows. Although manatees are fairly common in this area, they are never a sure thing so we were all thrilled to see one. 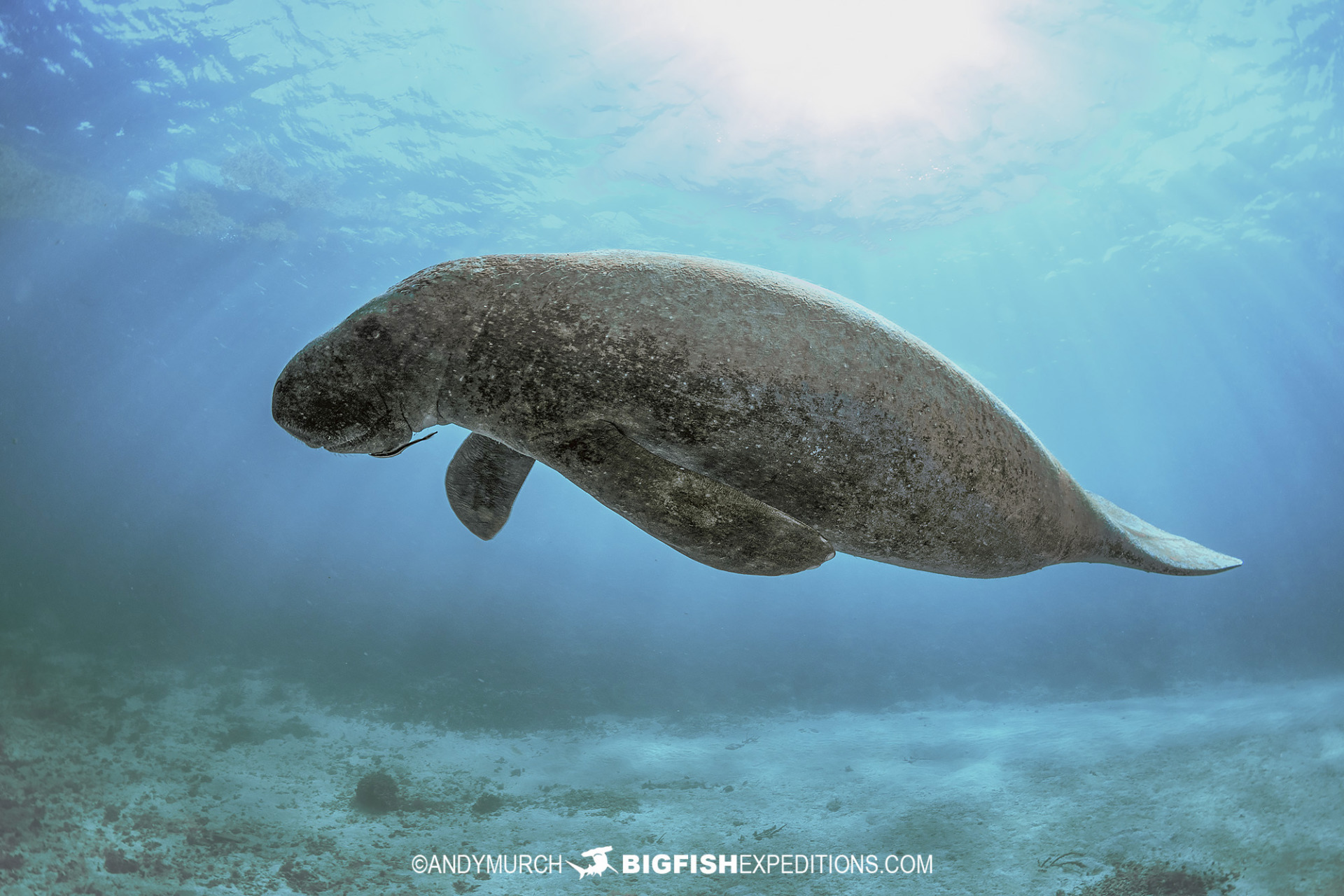 Early the next morning, we headed offshore to Banco Chinchorro. When we arrived at the fishermen’s shack that was to be our home for the next two nights, we quickly set up our dive gear and headed off to one of Chinchorro’s spectacular sponge covered reefs. 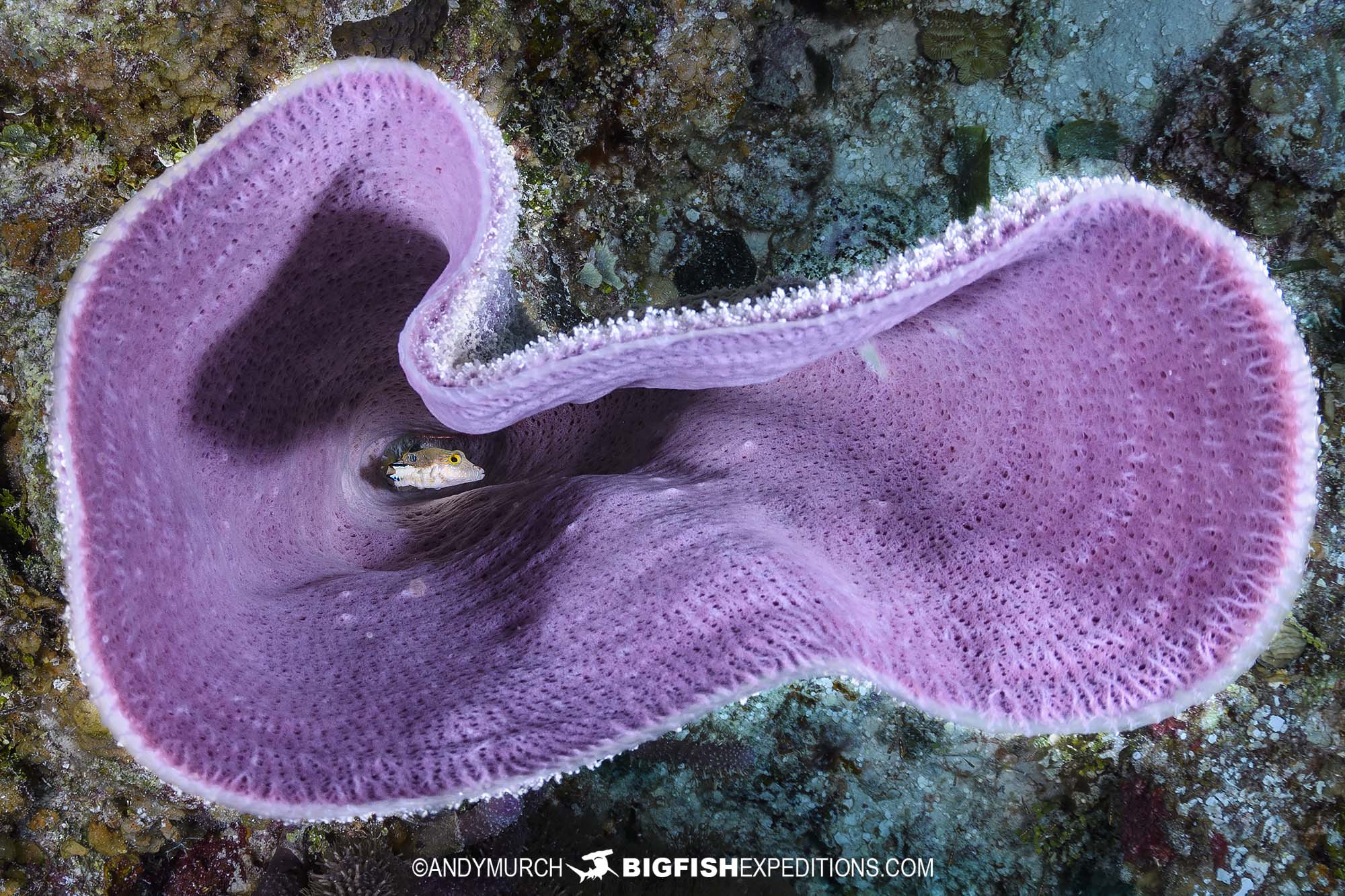 We conduct one reef dive each morning to hunt for invasive lionfish. The crocodiles find them very tasty and the reefs are better off without them, so there is no moral dilemma about spearing as many Asian lionfish as possible.

Long ago, the nurse sharks caught on to what we were doing, so they follow us around on every dive, hoping to steal a lionfish before the spearer can store it out of their reach. This results in nurse sharks swimming all around the divers, which is great for setting up shots of nurse sharks next to colourful sponges. 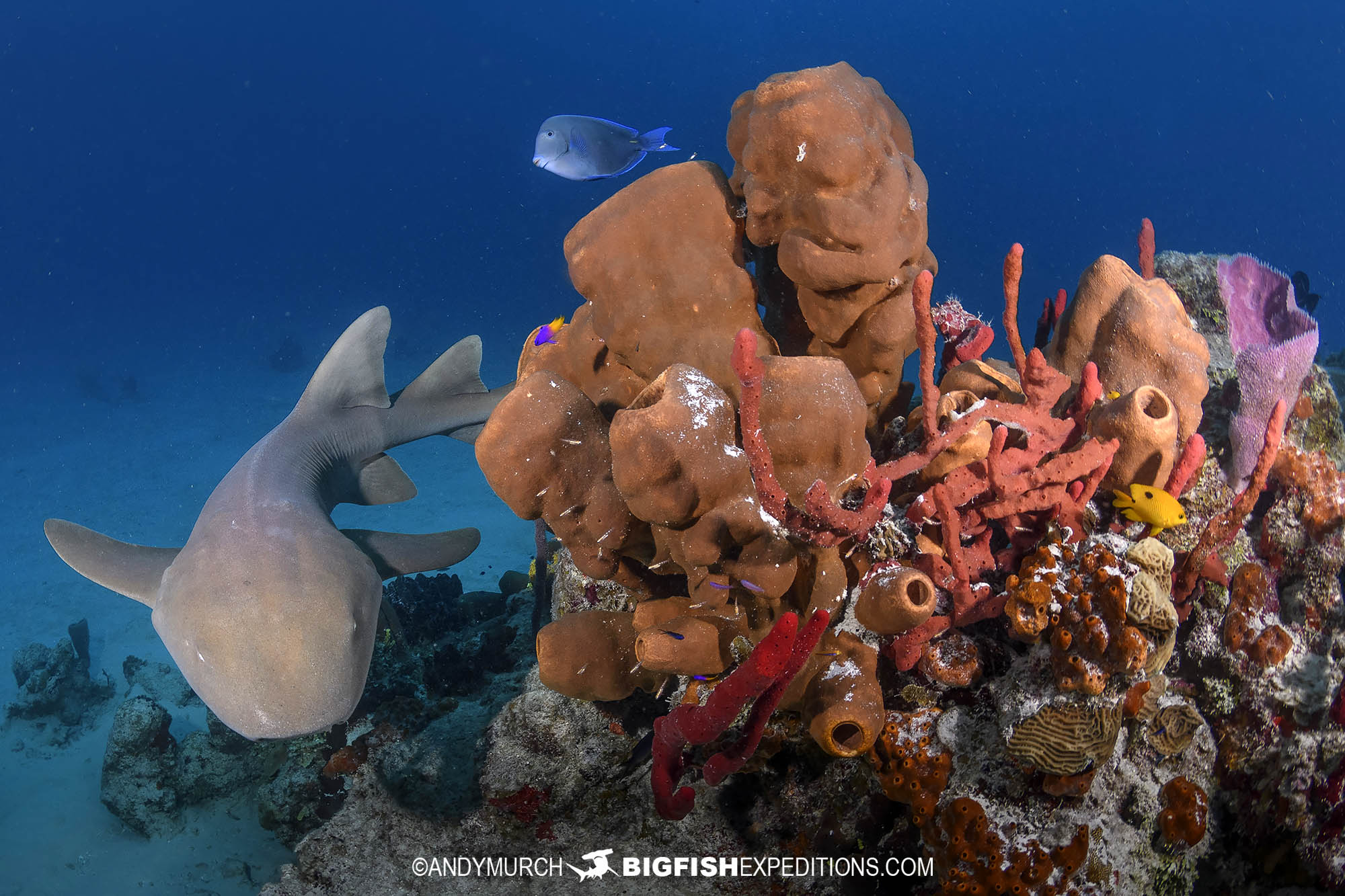 A good day with crocs

Upon returning to the shack, a couple crocodiles were already waiting for breakfast, so we immediately got in to photograph them. 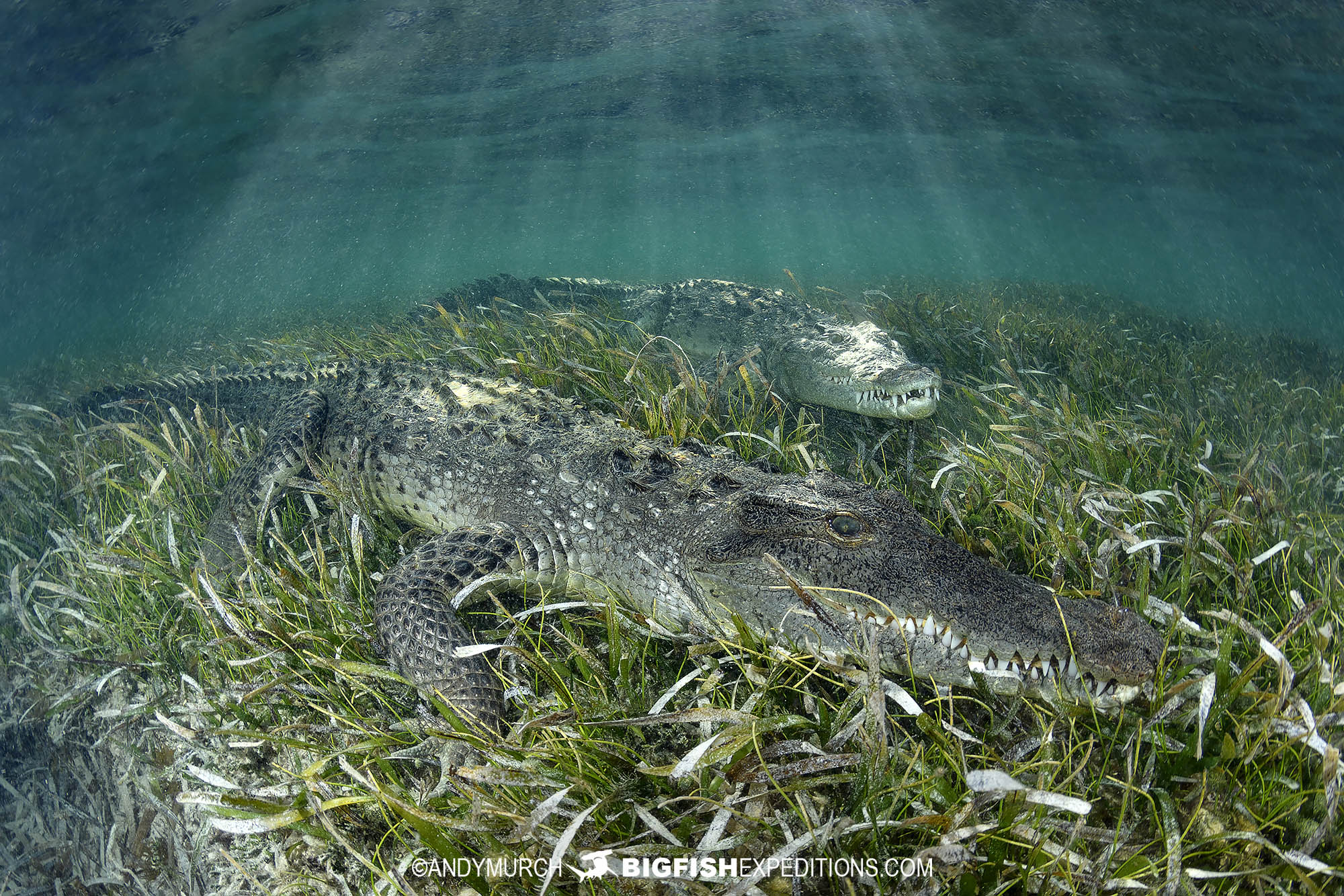 Before we went to Chinchorro, the owner of XTC warned us that the environmental prosecutor had sent two boats to the island, to stop people snorkeling with crocs. XTC has a special permit that specifically allows them to bring groups like ours to the island to snorkel with crocs, but the owner said that this year, their permit had been delayed so they had to go over the heads of the local issuing agency. They got their permit in time for croc season, but the head of the local agency was angered by being sidelined, and called the environmental prosecutors in to make trouble for XTC.

The result of this politics, was if theEP boat showed up, the boss wanted us to get out of the water. We reluctantlky agreed with this strategy, even though we had a permit.

Fortunately, for most of our first day of three at the island, there was no sign of them so we made the most of the crocs. 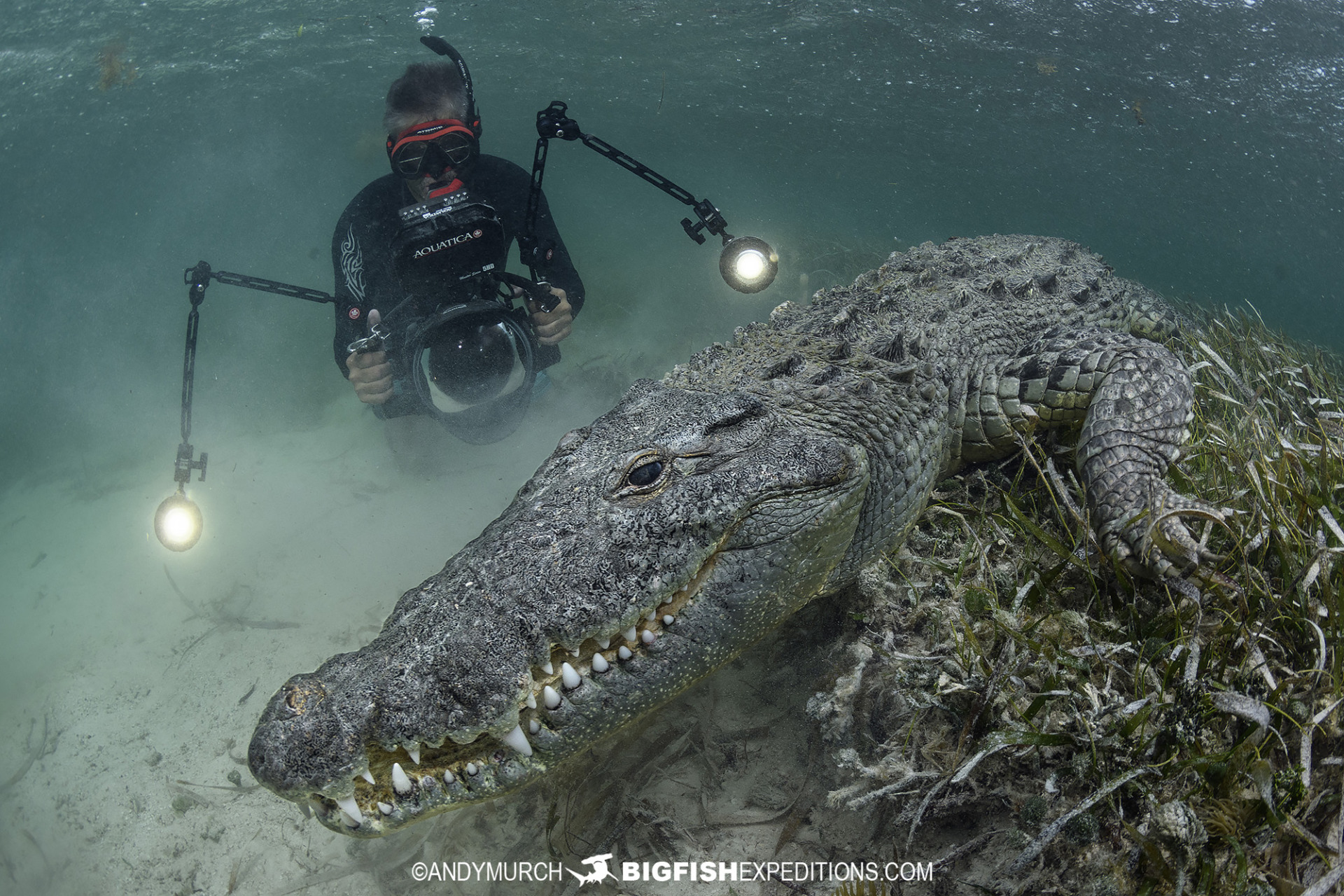 Shortly before the end of the day, the crew spotted the EP boat racing our way, so we got back on the boat to watch the interaction. The boat was filled with officials and machine gun toting masked guards. Our crew presented their permits, and after much discussion, the EP boat moved off to the next shack and sat watching us. We were losing the light anyway, so we decided to make dinner and turn in for the night. 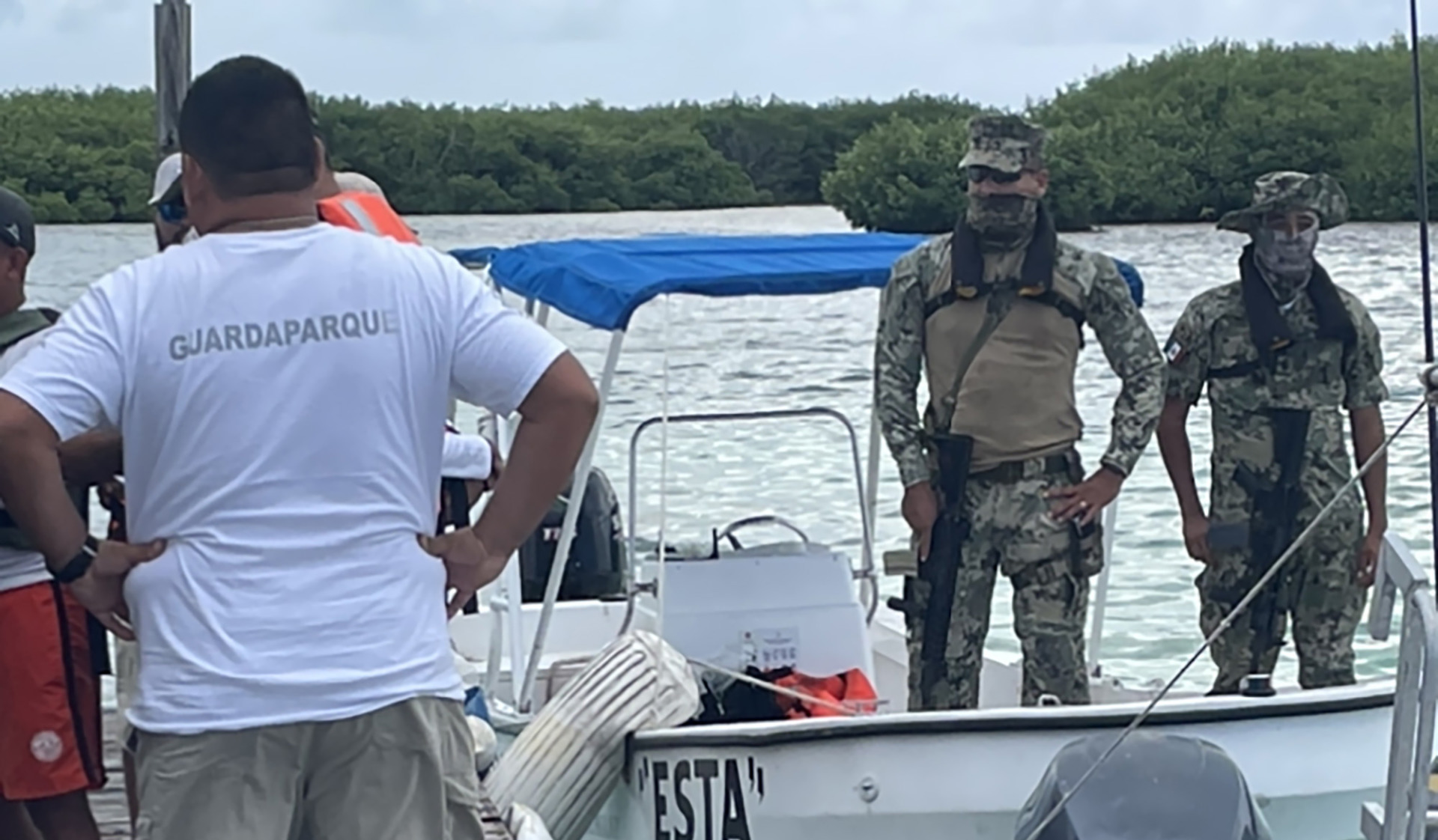 The next morning we dove again and then jumped in with the crocs, but after one rotation for everyone to get some good croc images, the EP showed up again and moored at the next shack. When it became clear that they were planning to stay, we started to voice our concerns to XTC but they were adamant that we could not get back in the water. Hours of heated  argument ensued, but try as we might, they would not let get back in the crocs, so we did another reef dive, which was excellent as usual but did little to ease our frustration. 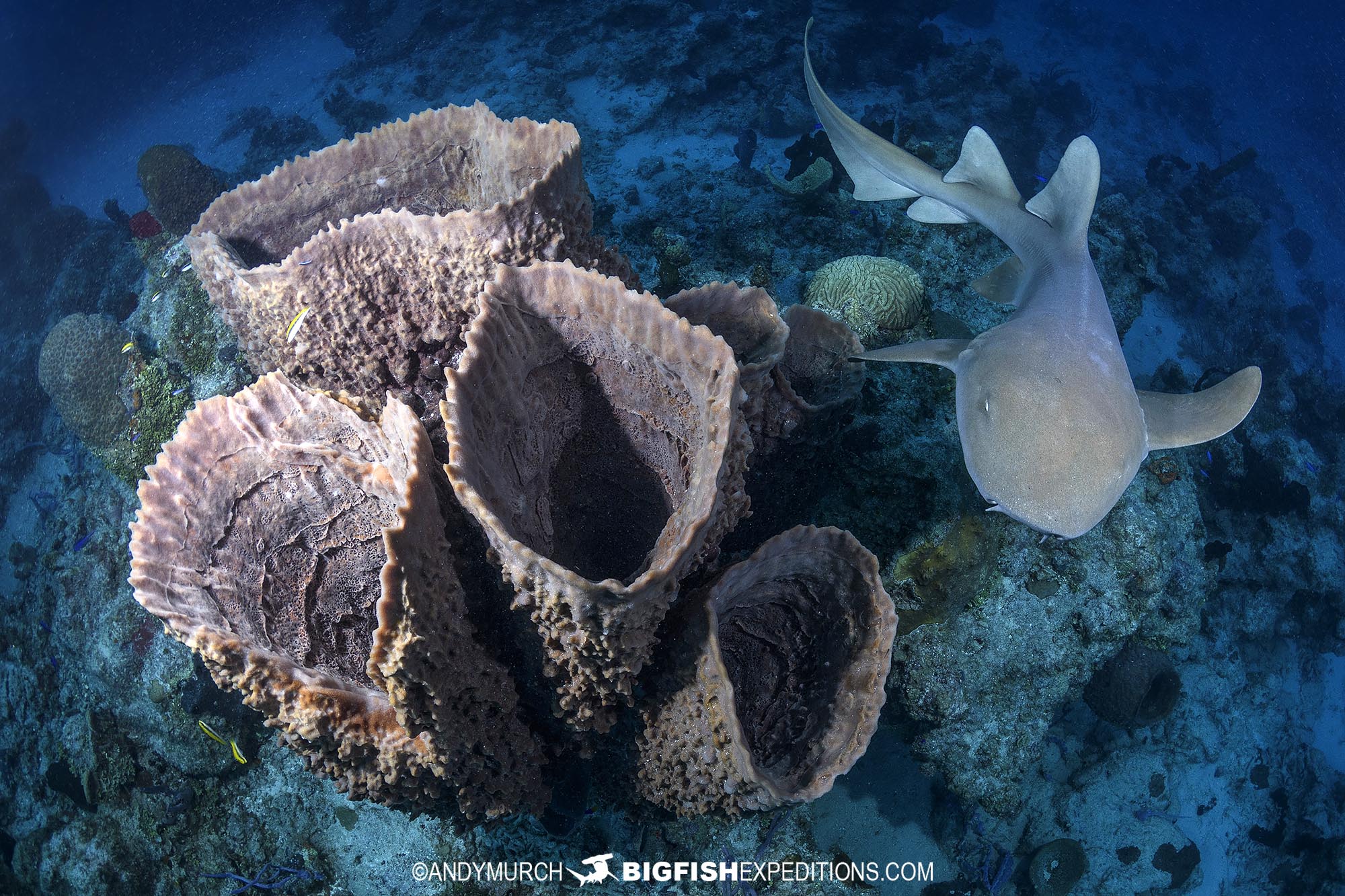 No Crocs on Day 3

On our final day at Chinchorro, the EP boat showed up at dawn, so we were not able to get in at all. We did a final dive on the reef and then returned to Xcalak. We all had great images and video, but we still felt very short changed. XTC promised the group a partial refund, and after a final night of revelry at the dive center bar, we returned to Cancun.

I am not making any excuses  for the operator because none of us thought they handled the situation well, but from a photography standpoint, we had shortened but excellent encounters, so it was still kind of a good trip.

Unfortunately, the guests on our second trip (we usually run two back-to-back) were not so lucky. XTC cancelled their trip completely when they arrived in Cancun. We felt awful for them but there was little we could do other than promise them full refunds. 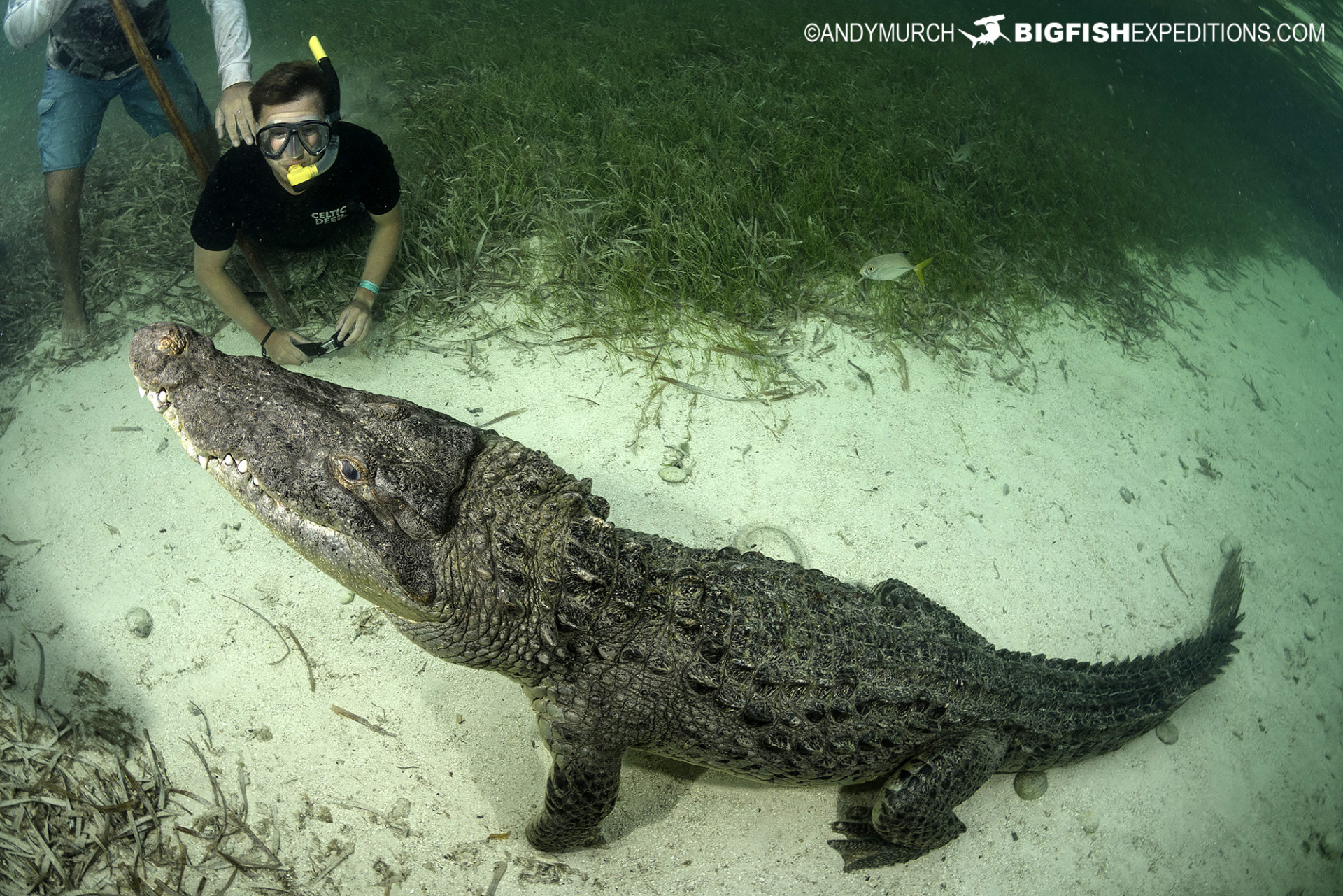 To kill a bit more time, we motored over to the ranger station on Cayo Grande. This is a good spot to shoot massive green iguanas; Chincorro’s second largest reptile. The big orange breeding males can exceed 1.6m! 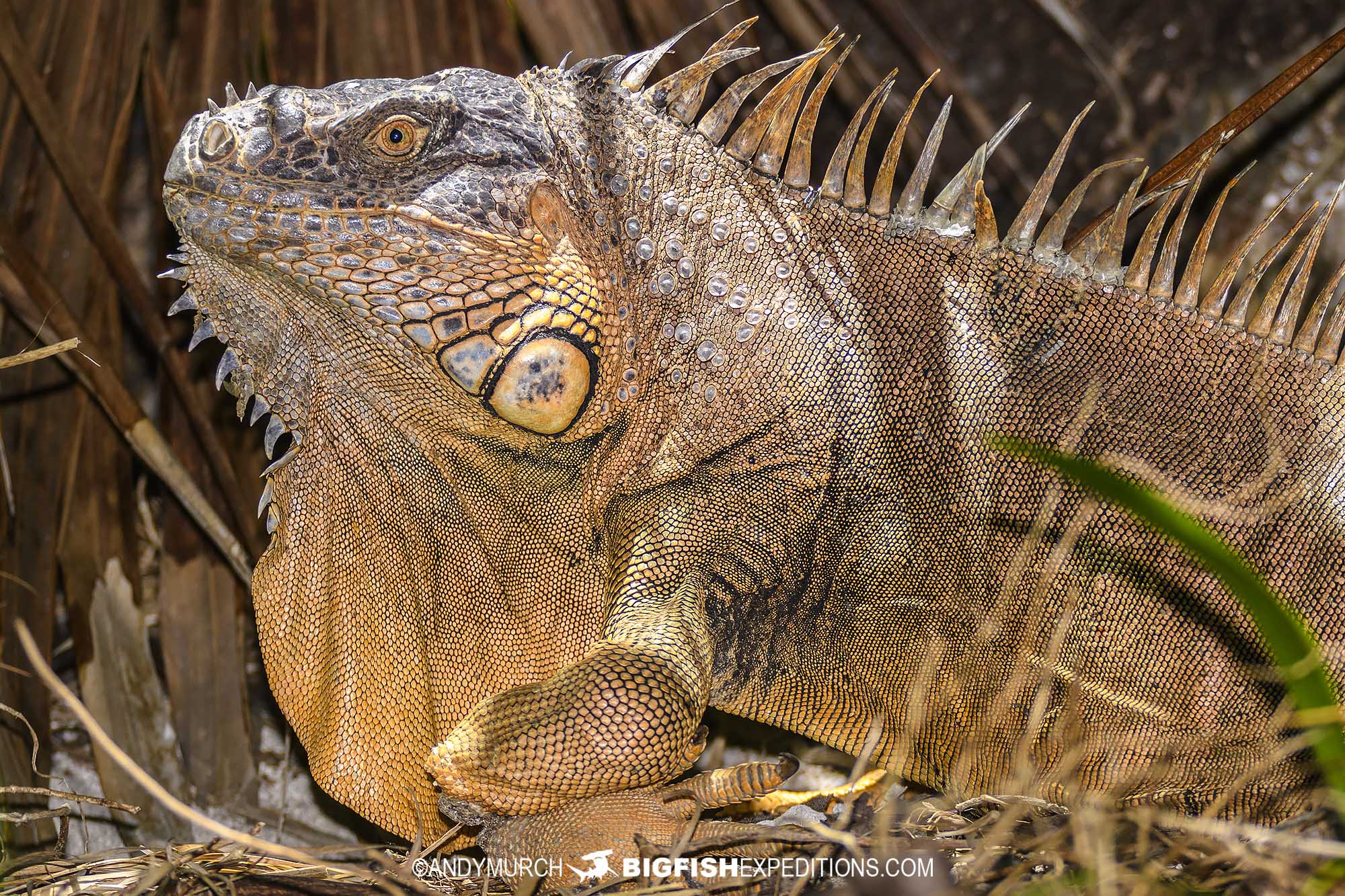 If you’re a real reptile geek, Cayo Grande is also a great place to find Cuban blue anoles (Anolis allisoni), Virtually every tree has a few lurking in its branches. 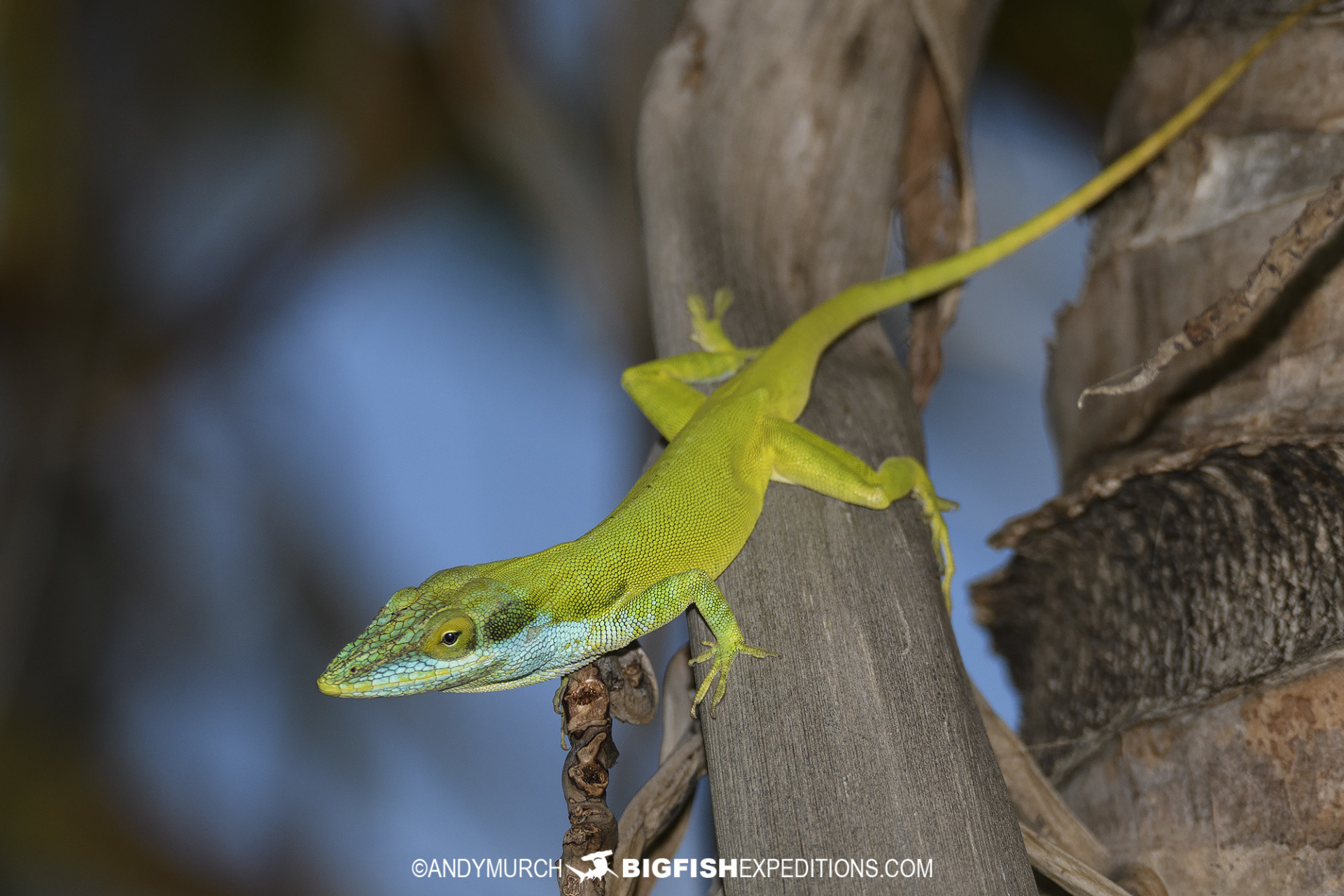 Whether the dive center get’s their ducks in a row by next year, remains to be seen, but they have assured us that everything will be business as usual, so for now, we are still officially running the trip. If it gets cancelled, we’ll issue everyone a full refund so if you want to snag one of the last available spots, you at least know we’ve got your back: American Crocodiles 2023 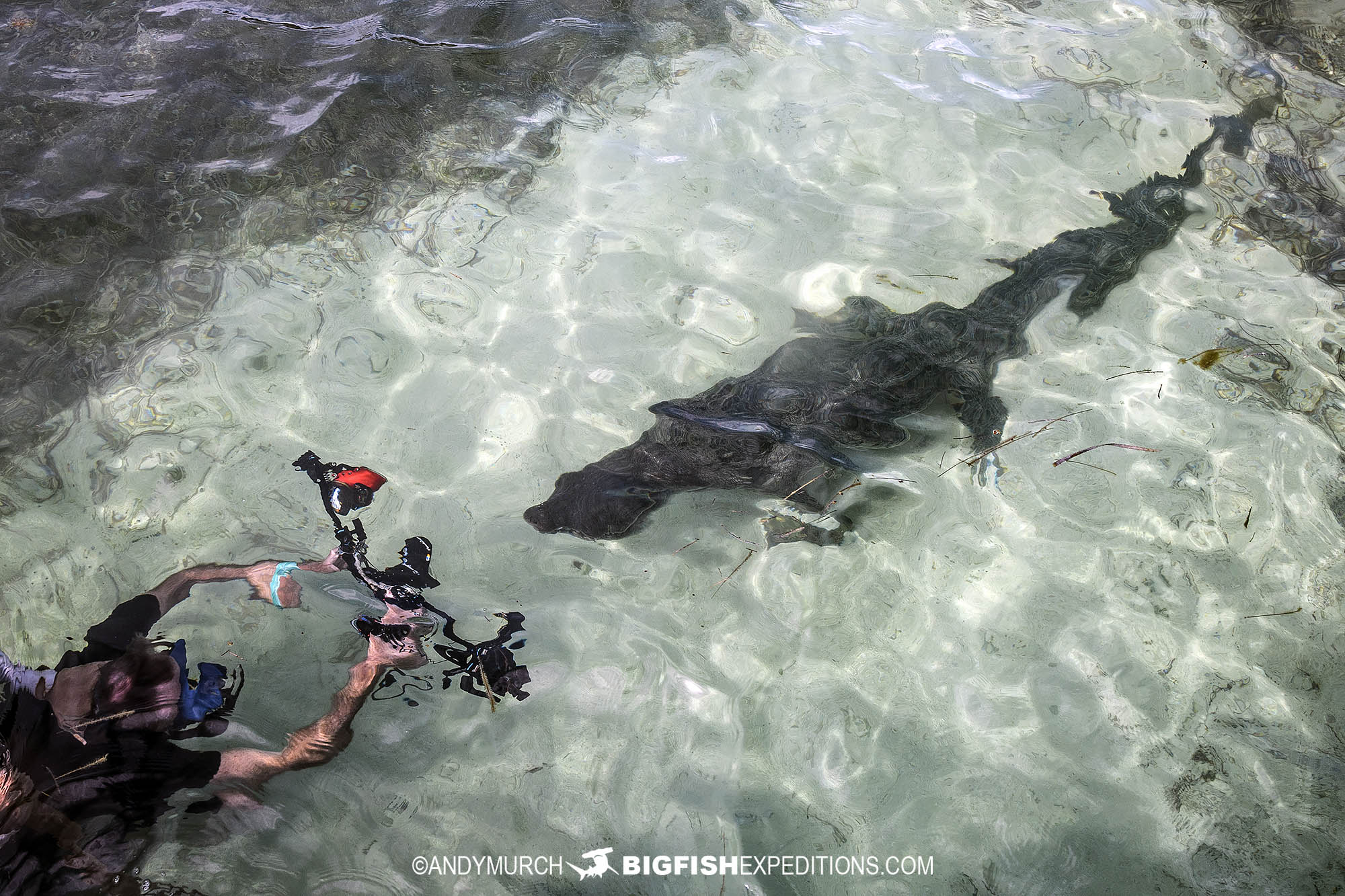 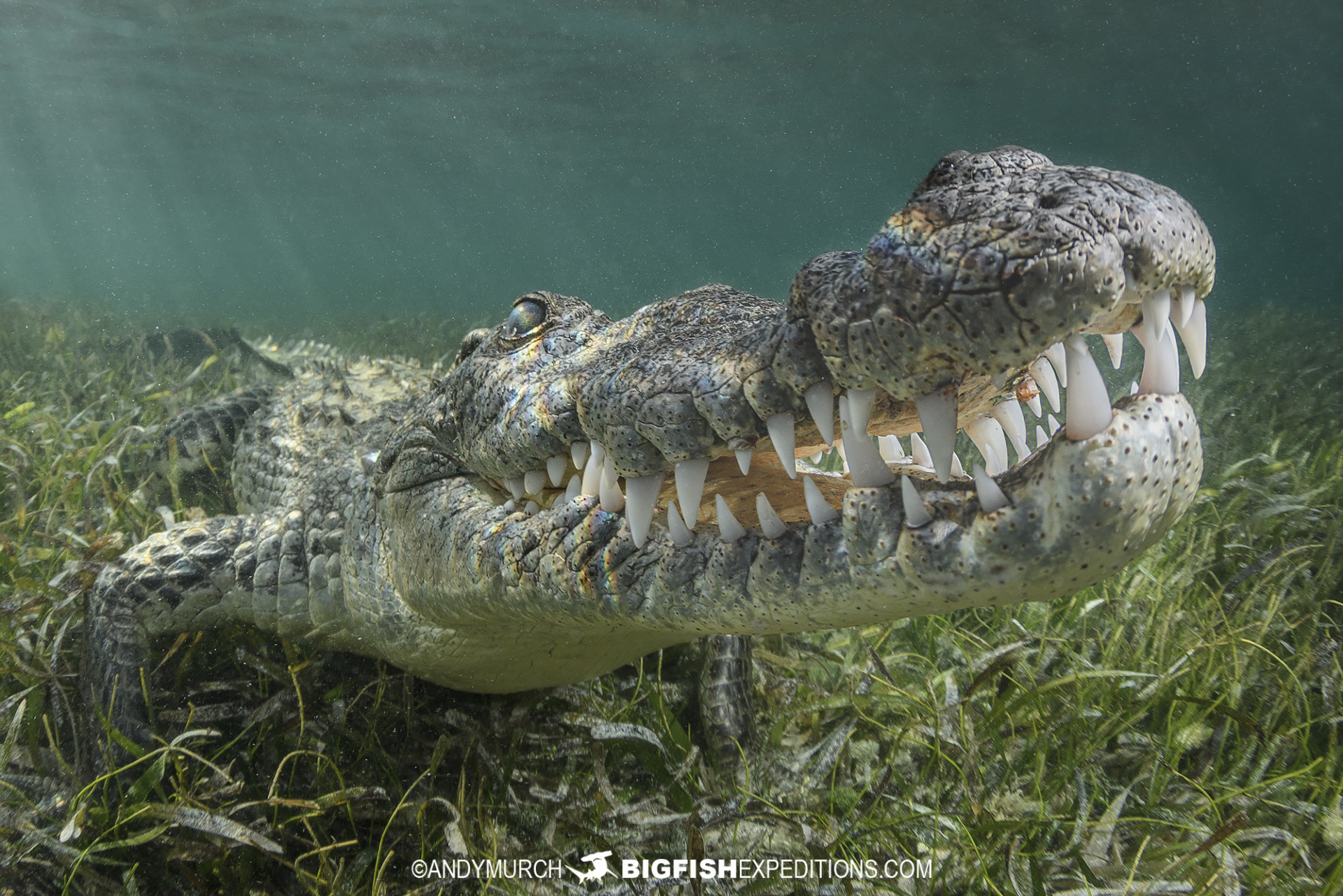