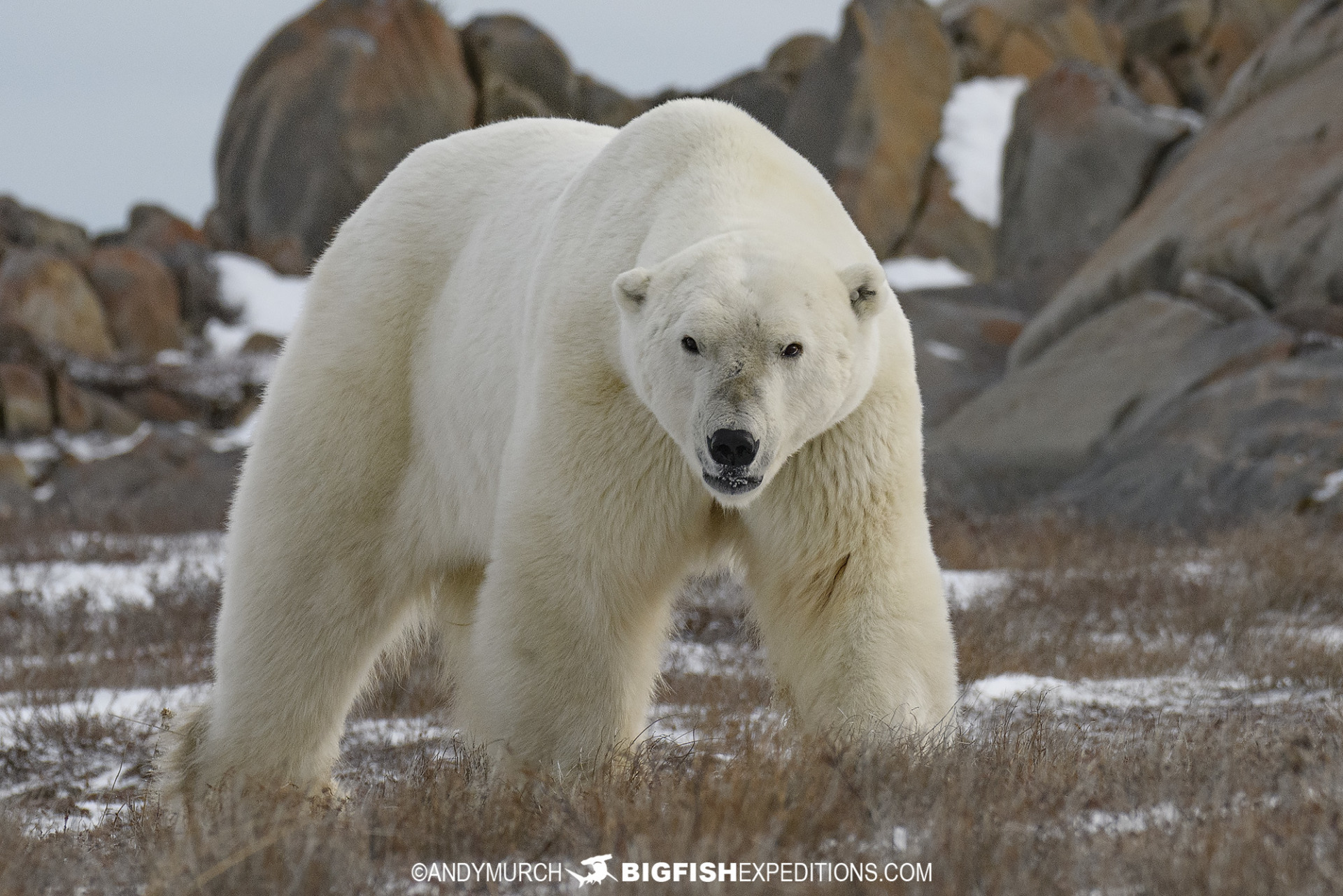 Another great year with polar bears on the Canadian Tundra. Apart from excellent bear encounters, and plentiful red, silver, and cross foxes, this year we also crossed paths with an extremely bold grey wolf. 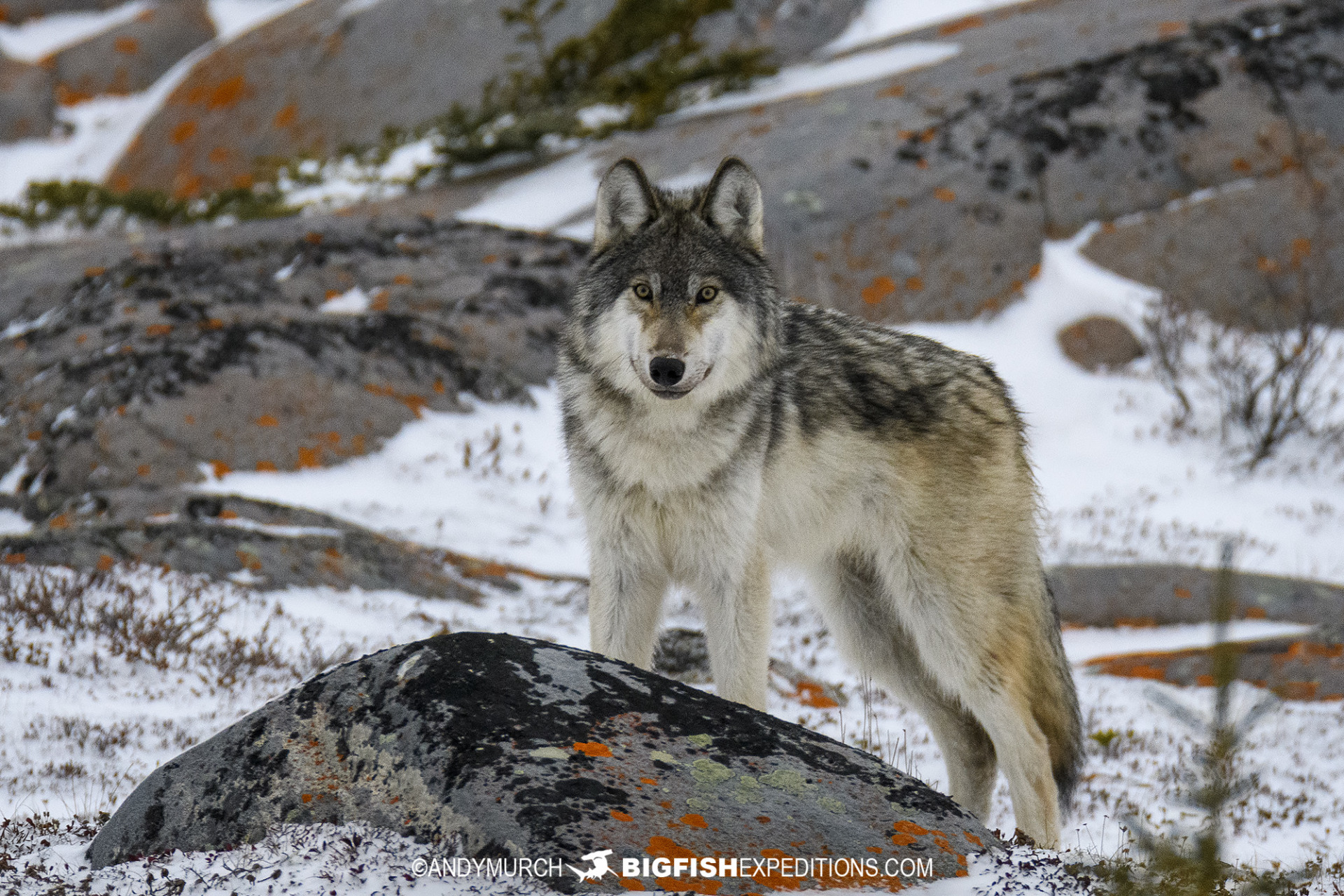 As usual, we hit the ground running. As soon as our flight arrived in Churchill, we made a short pitstop at our lodge on the tundra to prep cameras and don appropriate clothing, then set out to look for bears.

The first bear we saw was lazing on a small inaccessible island, too far from solid ground for us to approach or take respectable image, so we moved on in search of a more dynamic encounter. 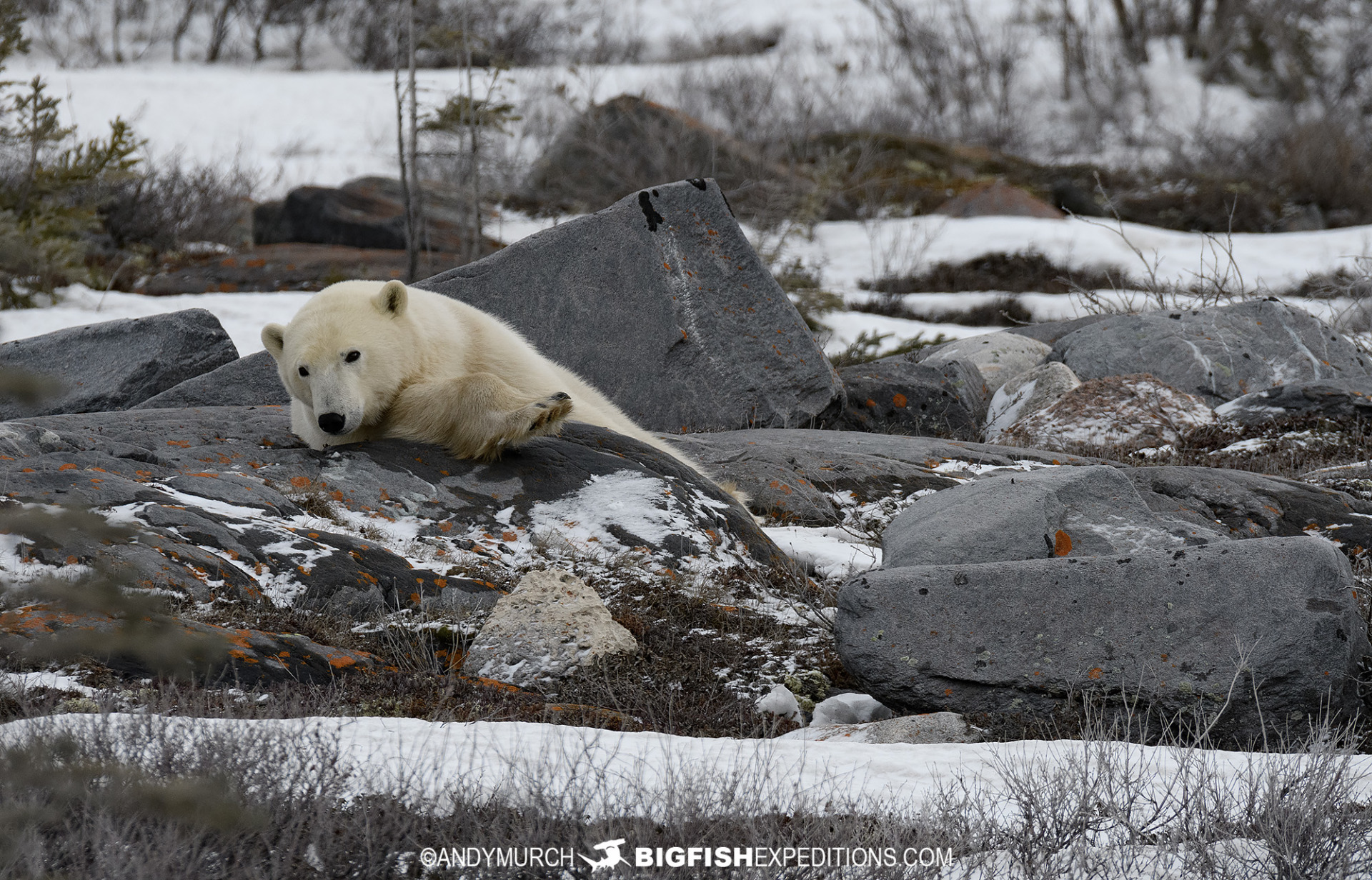 A short time later, we came across a bear wandering through the willows. The tundra landscape is dominated by stunted spruce trees and willow bushes that are surprisingly easy for polar bears to disappear in, so its important to be alert whenever you exit your vehicle during bear season.

We tracked the bear as it moved east, eventually reaching a great position to film it as it padded across a frozen stream, just a few meters away from us. 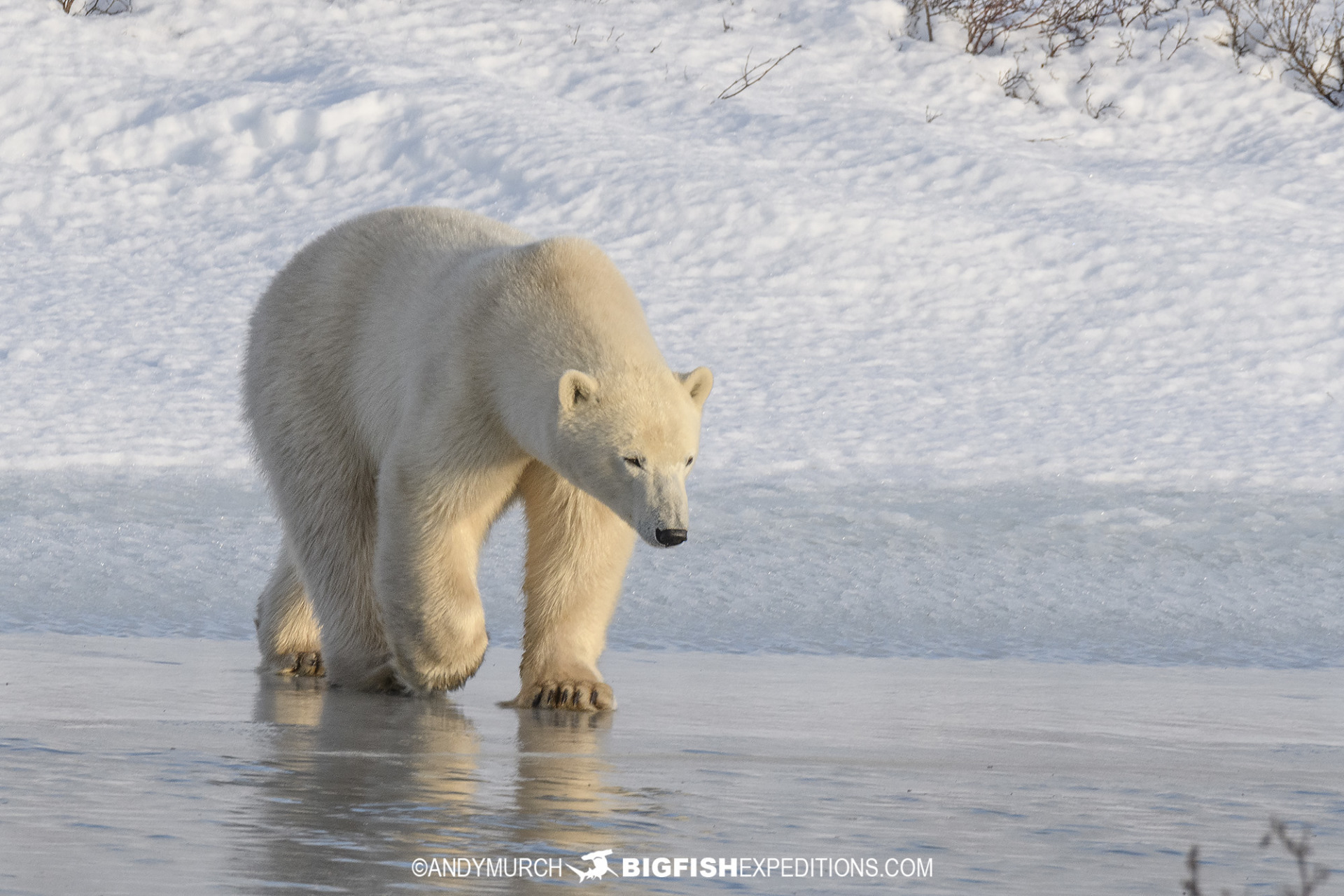 Day two was sunny and warm for a fall day in the Canadian subarctic. The southern shoreline of Hudson Bay was still completely clear of ice, leading me to second guess the timing of the expedition, but by the end of the week, it was clear we had scheduled it perfectly.

We watched a couple of bears working their way through the brush, nosing the ground in search of clams or anything else that might supply a hint of nutrition to keep their bellies from cramping while they waited for the bay to freeze. 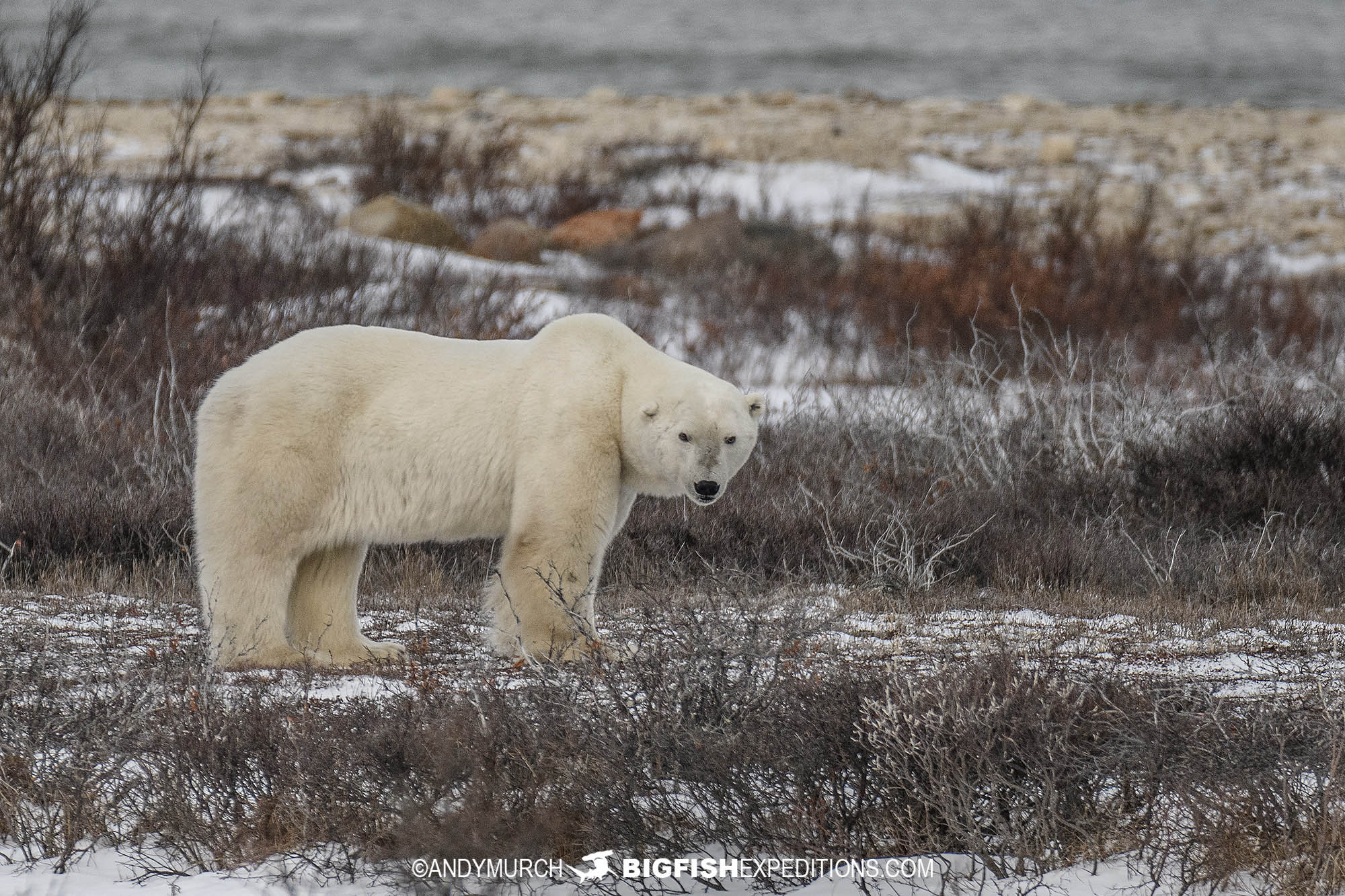 In the afternoon we spotted the first of many red foxes hunting on a hillside. Only a few decades ago, red foxes were rarely seen this far north, but rising temperatures have allowed a number species to gain a foothold in the subarctic. 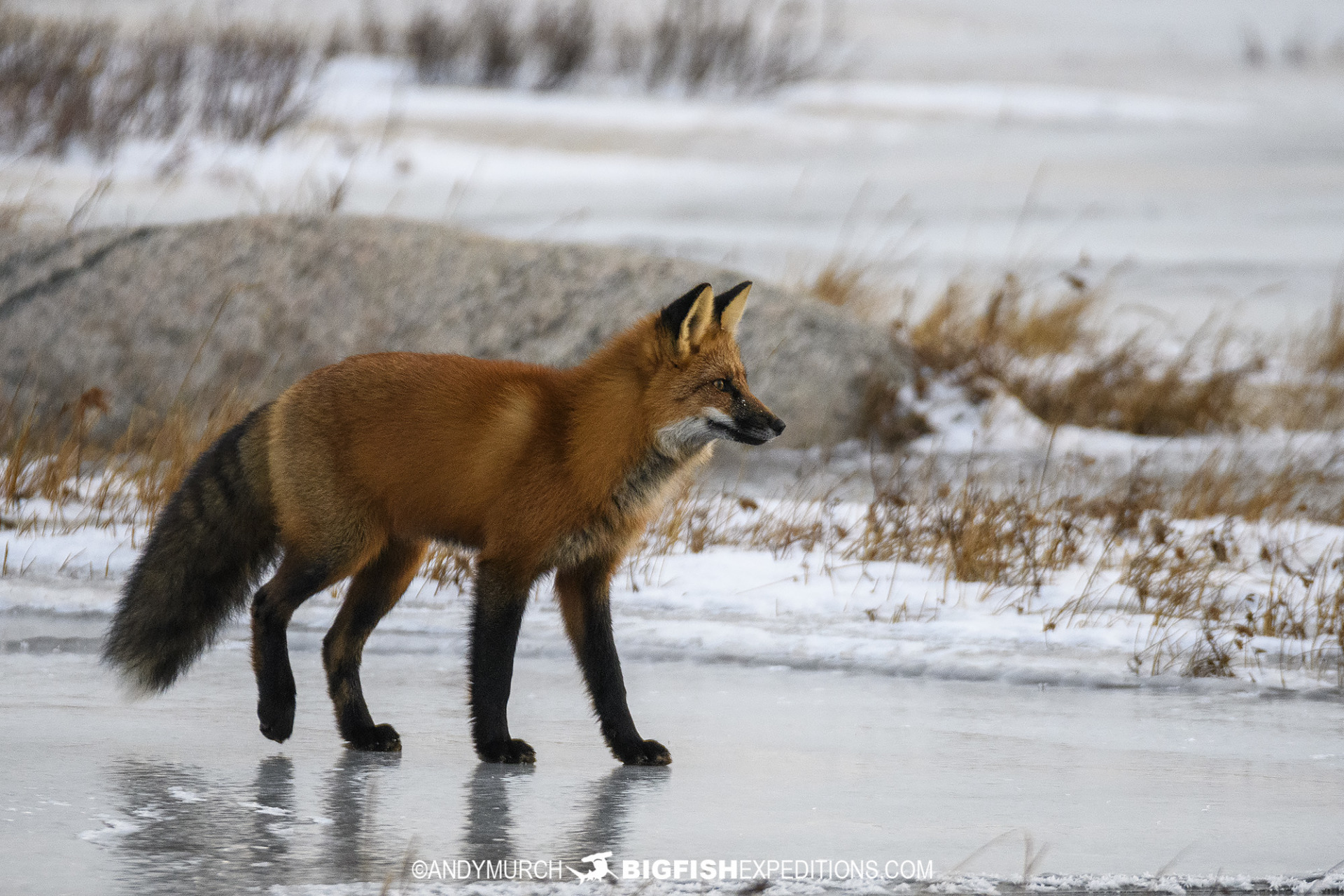 As the sun set, we returned to White Whale Lodge; a brand new accommodation option located deep in the tundra, with great views of Hudson Bay. On previous polar bear trips we had stayed in the town of Churchill itself, but as soon as White Whale Lodge opened, we jumped at the chance to spend our nights out on the tundra where we would have unparalleled views of the night sky without any light pollution from the city.

When darkness fell, the aurora index was looking good and the lack of cloud cover was encouraging. Sure enough, around 9pm the sky caught fire!

We immediately bundled into the warmest clothes we had, and set up tripods on the deck of the lodge to catch the light show. The aurora was fantastic! 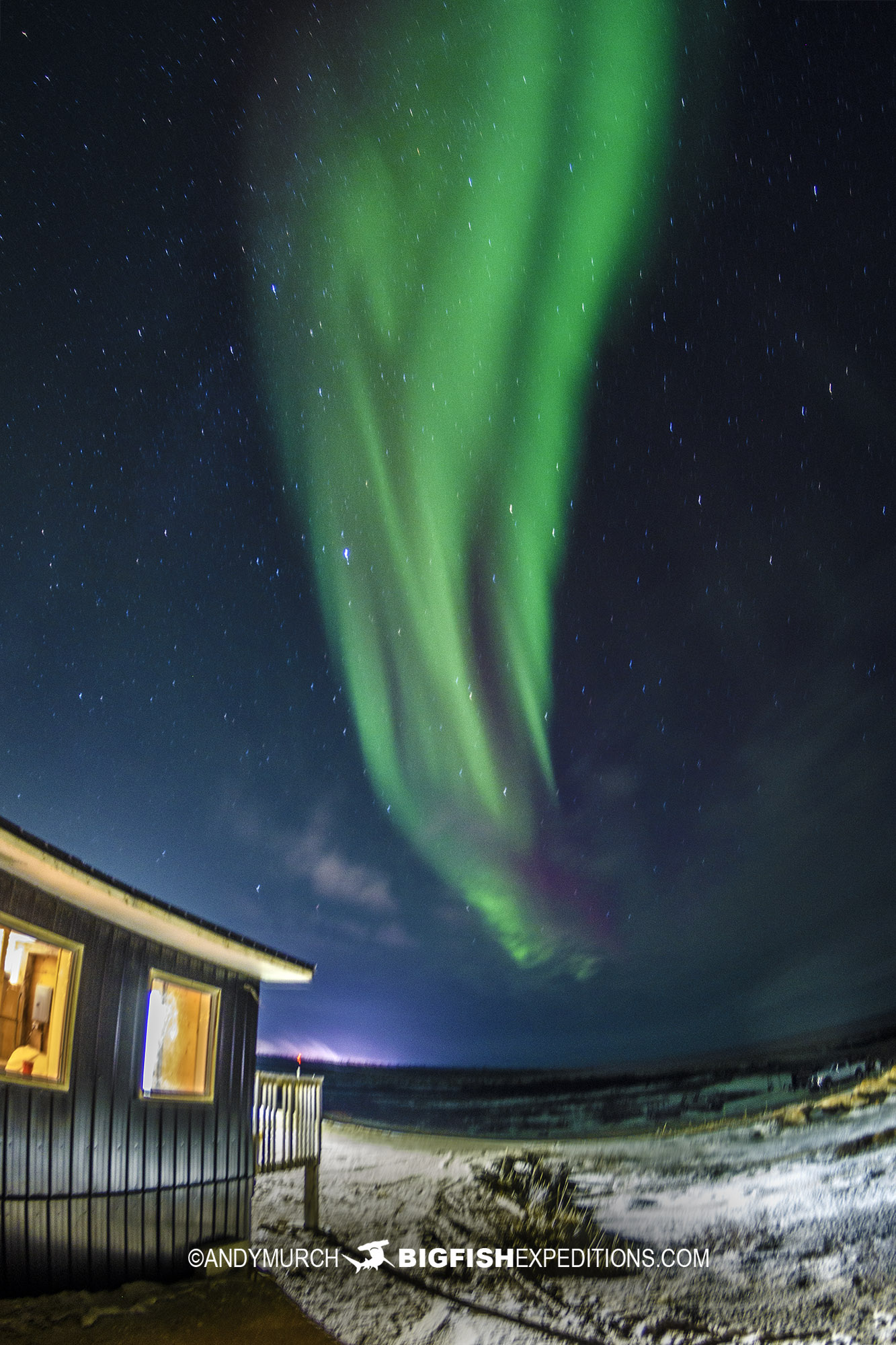 On day three the temperature began to drop. This was good because it mean the bears would be on the move.

The first bear we saw was at a spot called Bird Cove; a favorite hangout for bears waiting for the freeze. When it reached an area covered in willows, a larger bear emerged, startling the intruder into a gallop along the shoreline.

We caught up with it again, loping along the beach in the next bay. 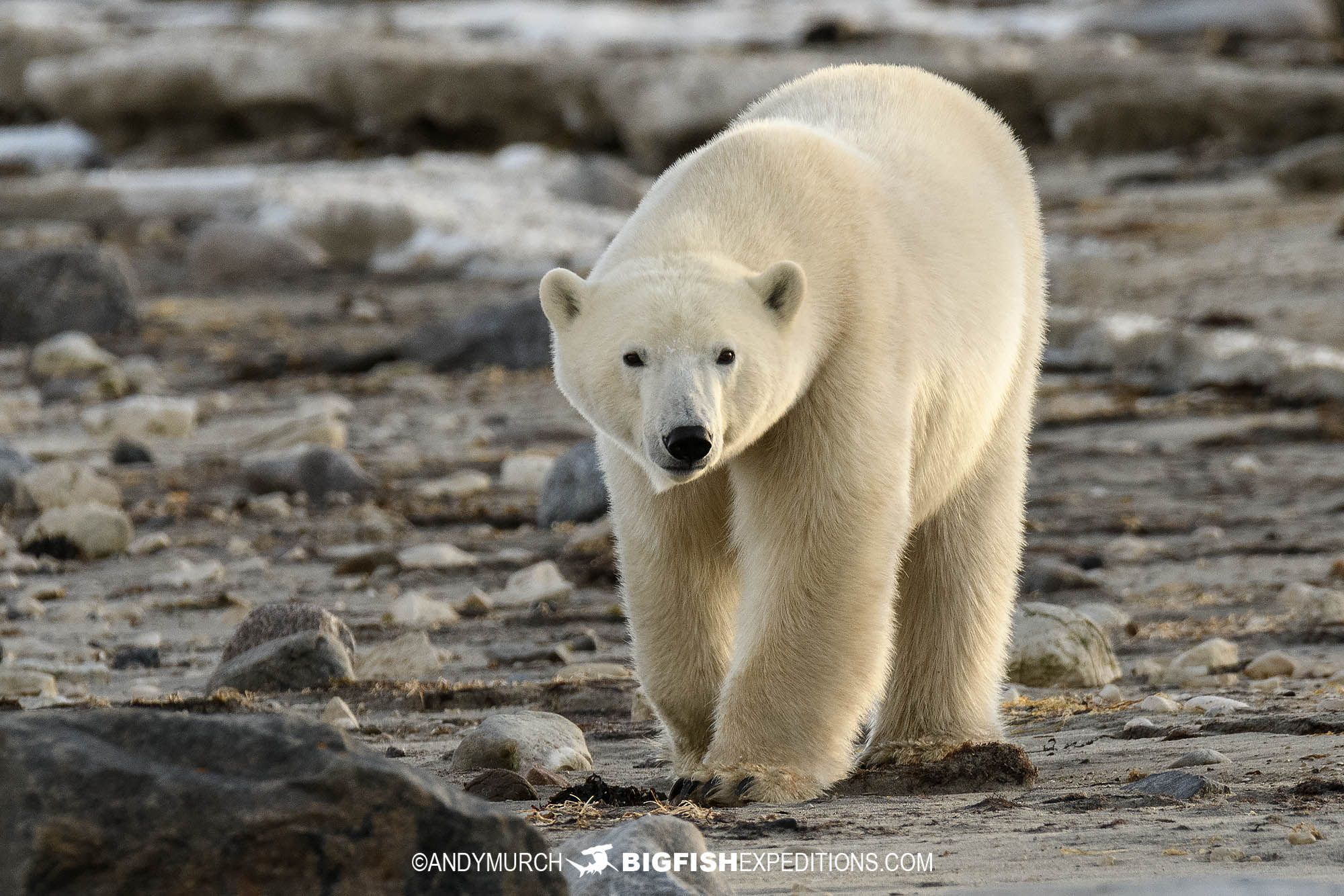 Leaving the bears, we drove west towards Churchill, until we spotted a wolf making its way through some low spruce trees. Wolves are fairly common on the tundra but we rarely see them during bear season, so we quickly jumped out and shadowed it on foot, snapping images whenever it came back into view. 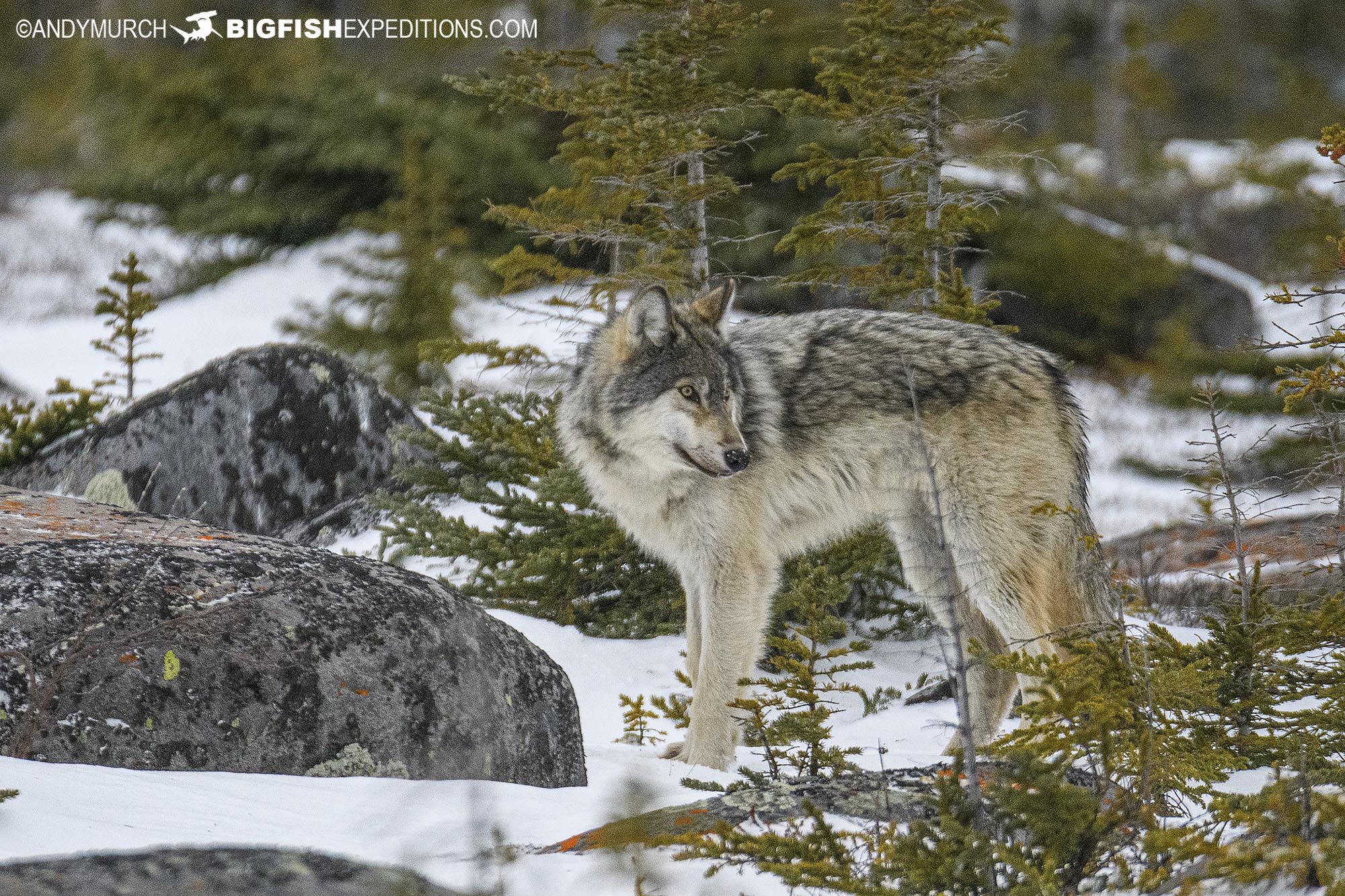 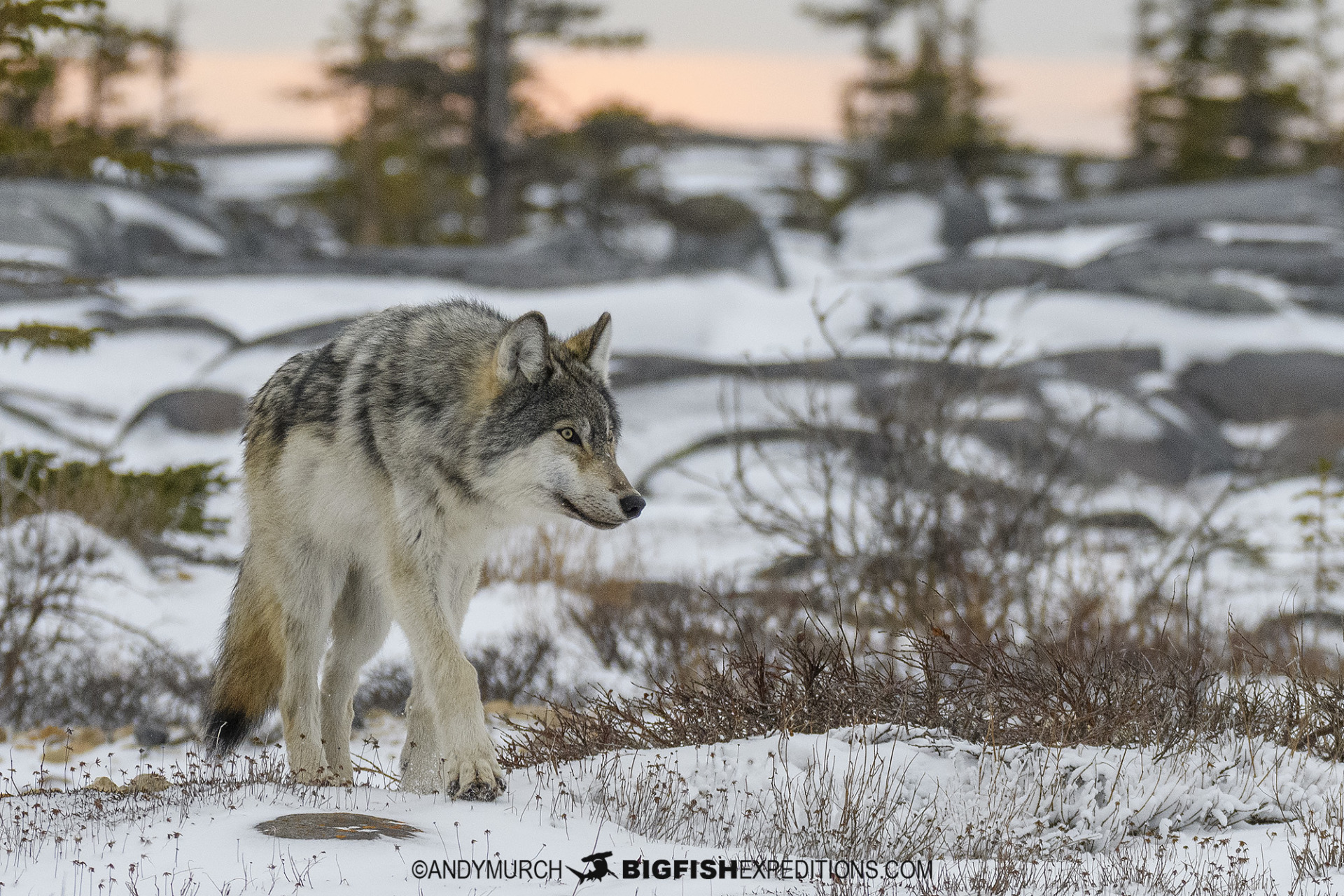 Surprisingly bold, the wolf gave an occasional glance but mostly ignored us as it loped along looking for arctic hares, foxes, geese, and ptarmigan.

Eventually we had to give up pursuit before we strayed too far from the safety of our vehicle. We drove a mile or so west and set up again, hoping that wolf would head in our direction and that’s exactly what it did! We stayed together and tried to be as non-threatening as possible.

Perhaps sensing our lack of malice, the wolf came trotting down a slope directly towards us and stopped briefly 3m away; so close that I had to switch to shooting head shots because I could not fit the entire animal in my viewfinder. It was an incredible experience to be so close to such an iconic animal.

Eventually, our wolf crossed a frozen lake and dissolved into the forest. Later we saw two more ice bears and then returned to the lodge as darkness fell. 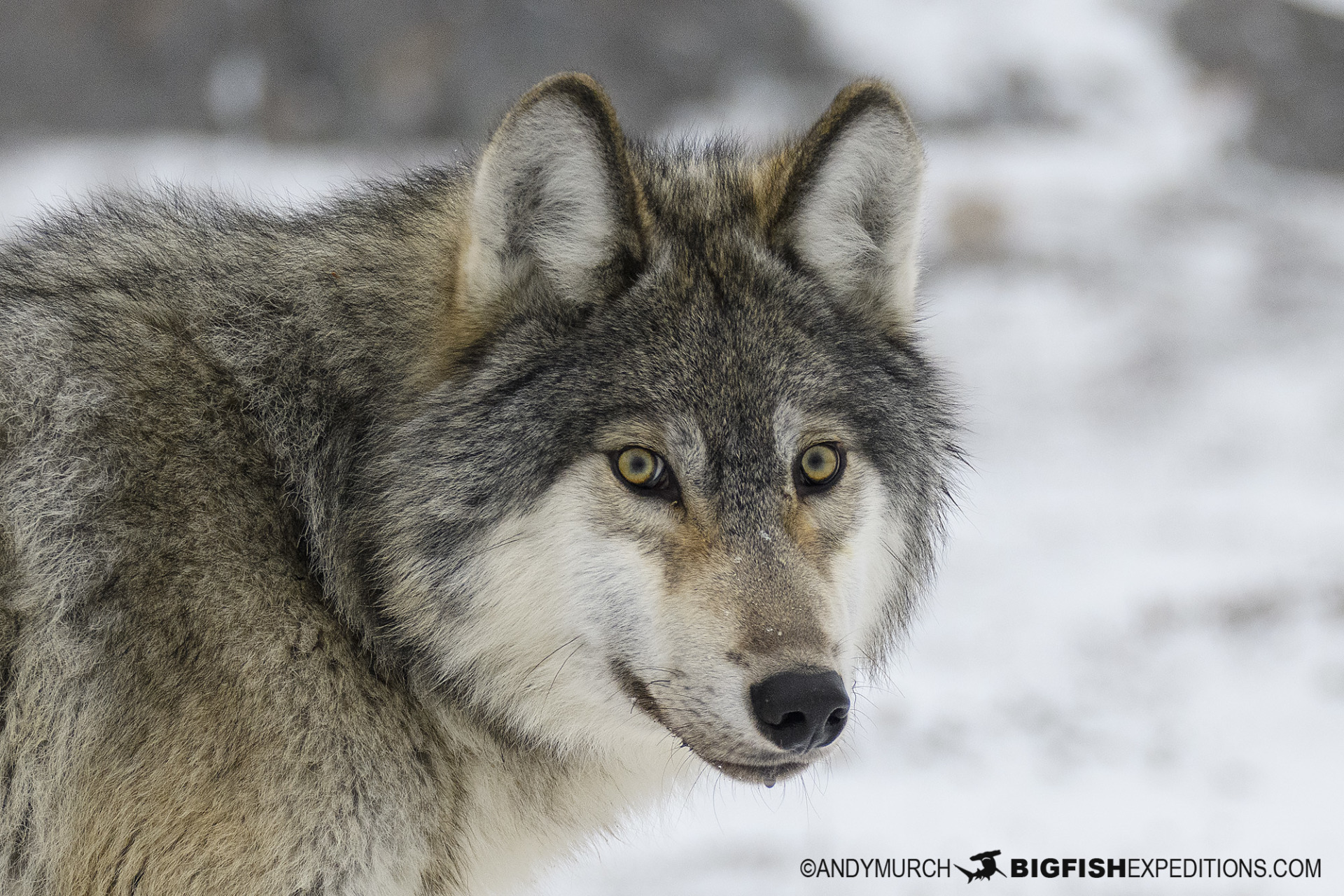 The next day, the temperature plummeted. By midday, a blizzard arrived from the north, forcing virtually everything to hunker down. Not even polar bears were moving around. The only wildlife we saw were half frozen Canada geese.

Pummelled by subzero winds, within hours, the ocean turned to slush. To give you an idea of the wind chill, when we hit the beach the next morning, we found waves frozen in place before they could recede back into the sea.

Day five was cold and clear. We began the day watching a silver and red fox playing and hunting together. They were extremely tolerant of our presence. They would trot off to find a vole or lemming, consuming it on the spot, and then returning to where we were watching them, like hunting dogs returning to the hunter. The photo ops were excellent! 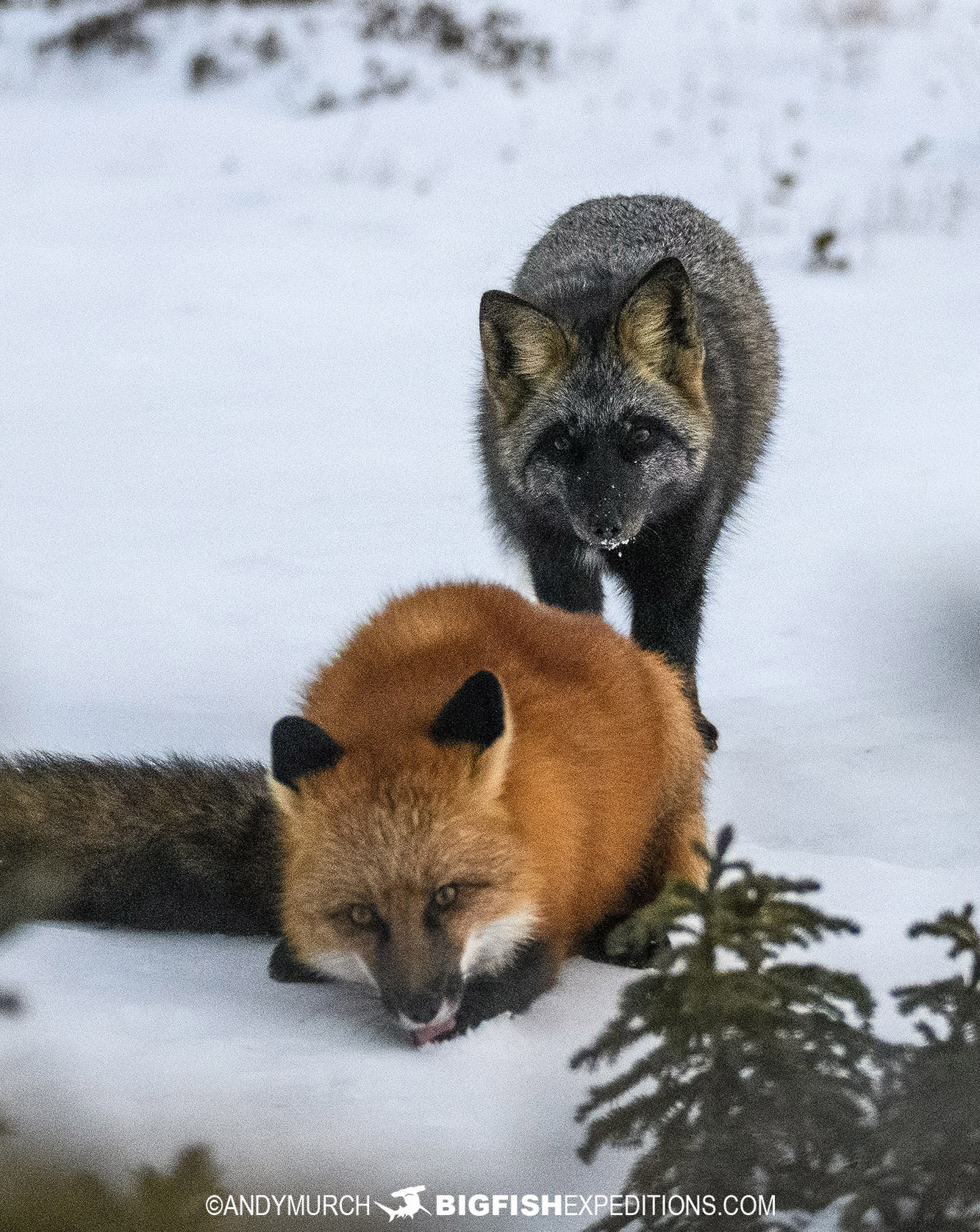 We generally split into two vehicles which means we can cover more ground and radio each other when we have a good sighting. The other half of our group had found a big male bear so we reluctantly bid farewell to the foxes and raced across the tundra to photograph the bear.

Later, we briefly say a mom with two cubs and then spent time with another solitary male, working its way along the beach

After following a cross fox for some time and photographing a pale red fox, we returned to the lodge exhausted but elated from a great day on the tundra. 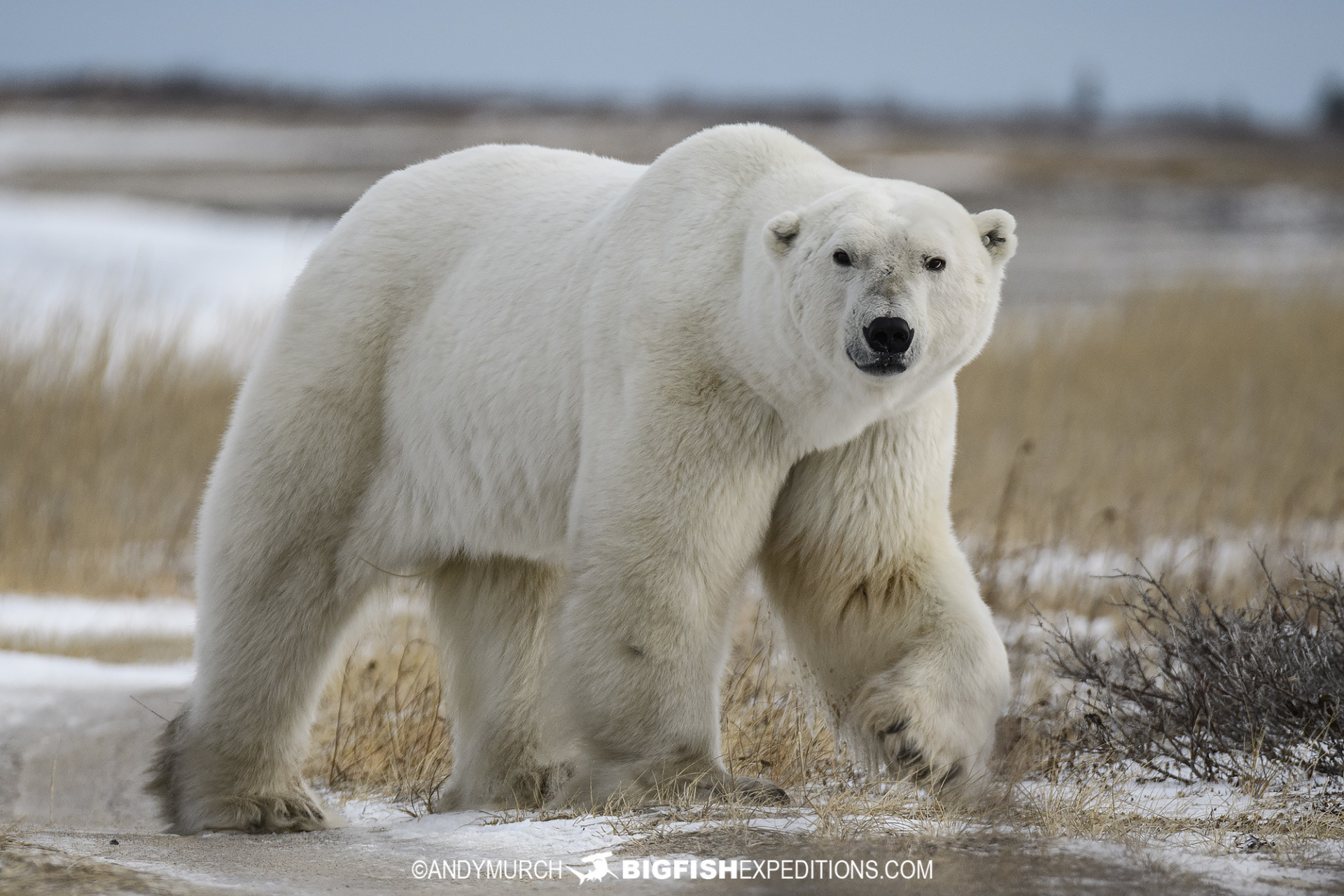 On our sixth and final day on the tundra, the wind picked up again but not so much that we could not head out to find animals.

The day started with some nice red fox sightings, then we came across an arctic hare sitting in front of low trees where it was protected from the icy wind.

Later we photographed a subadult polar bear foraging in front of a dramatic granite cliff in Polar Bear Alley. 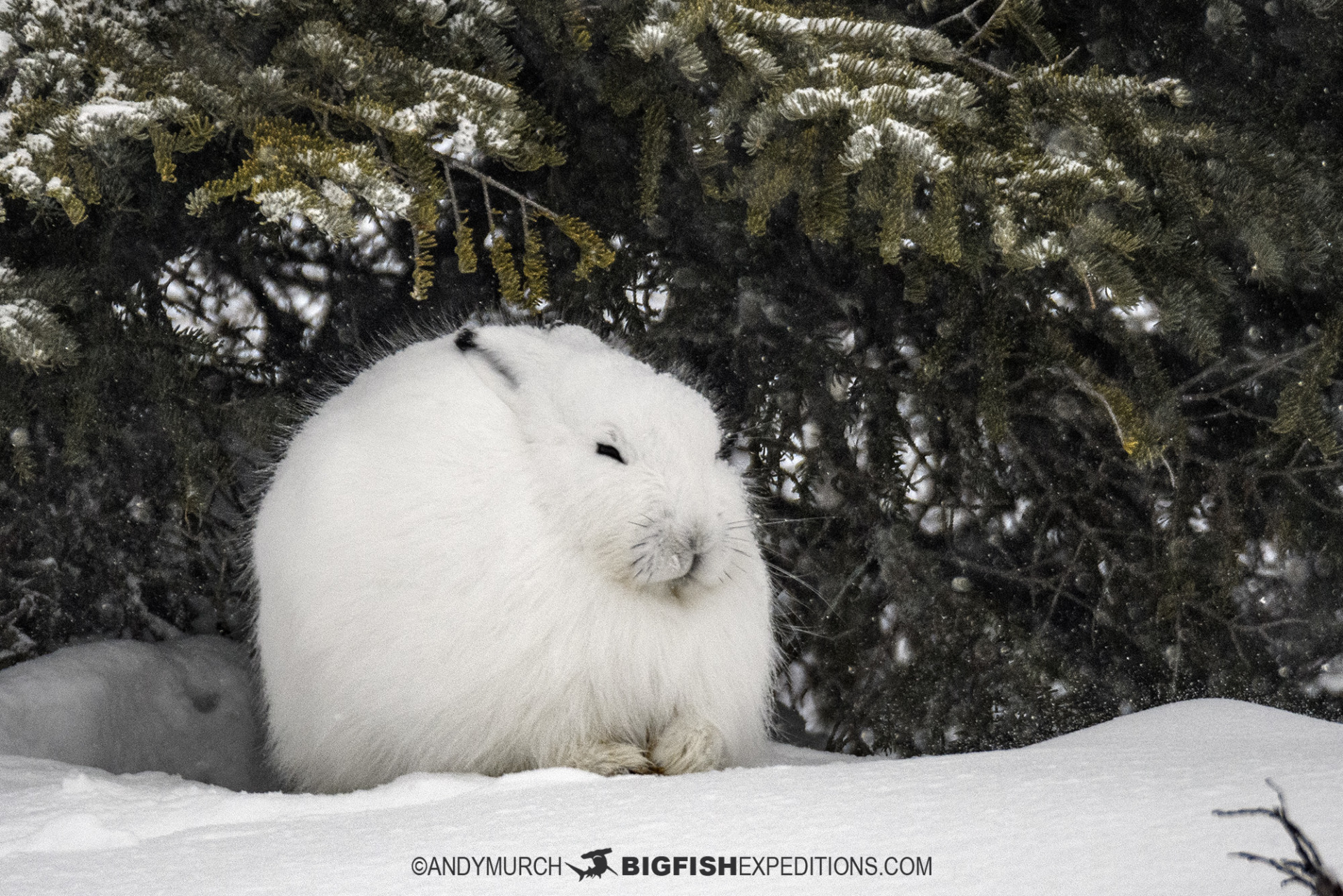 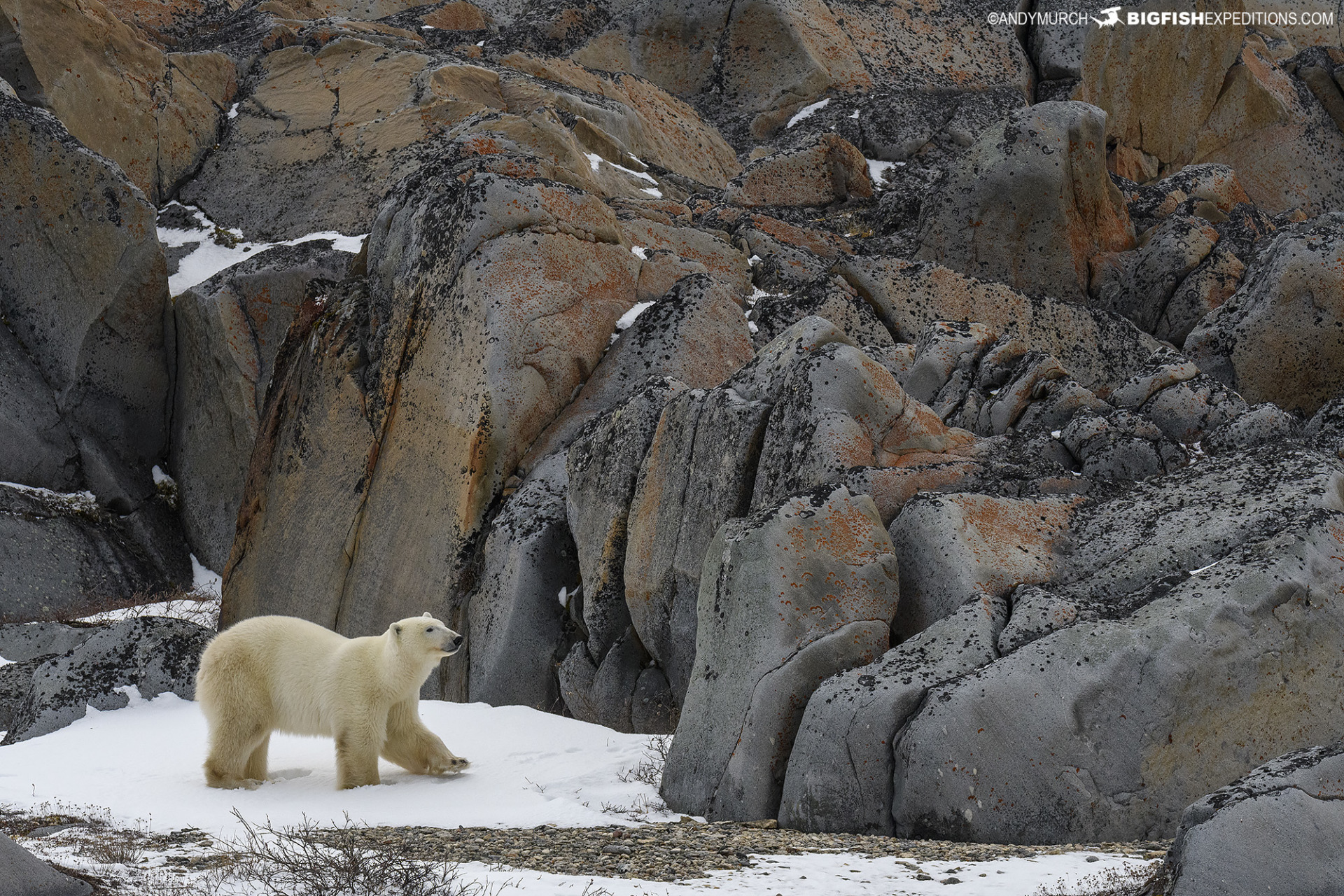 I lost count of the amount of foxes we saw, but it seemed like they were around every corner that day. We concentrated on photographing the dark colour morphs that are unique to this latitude. 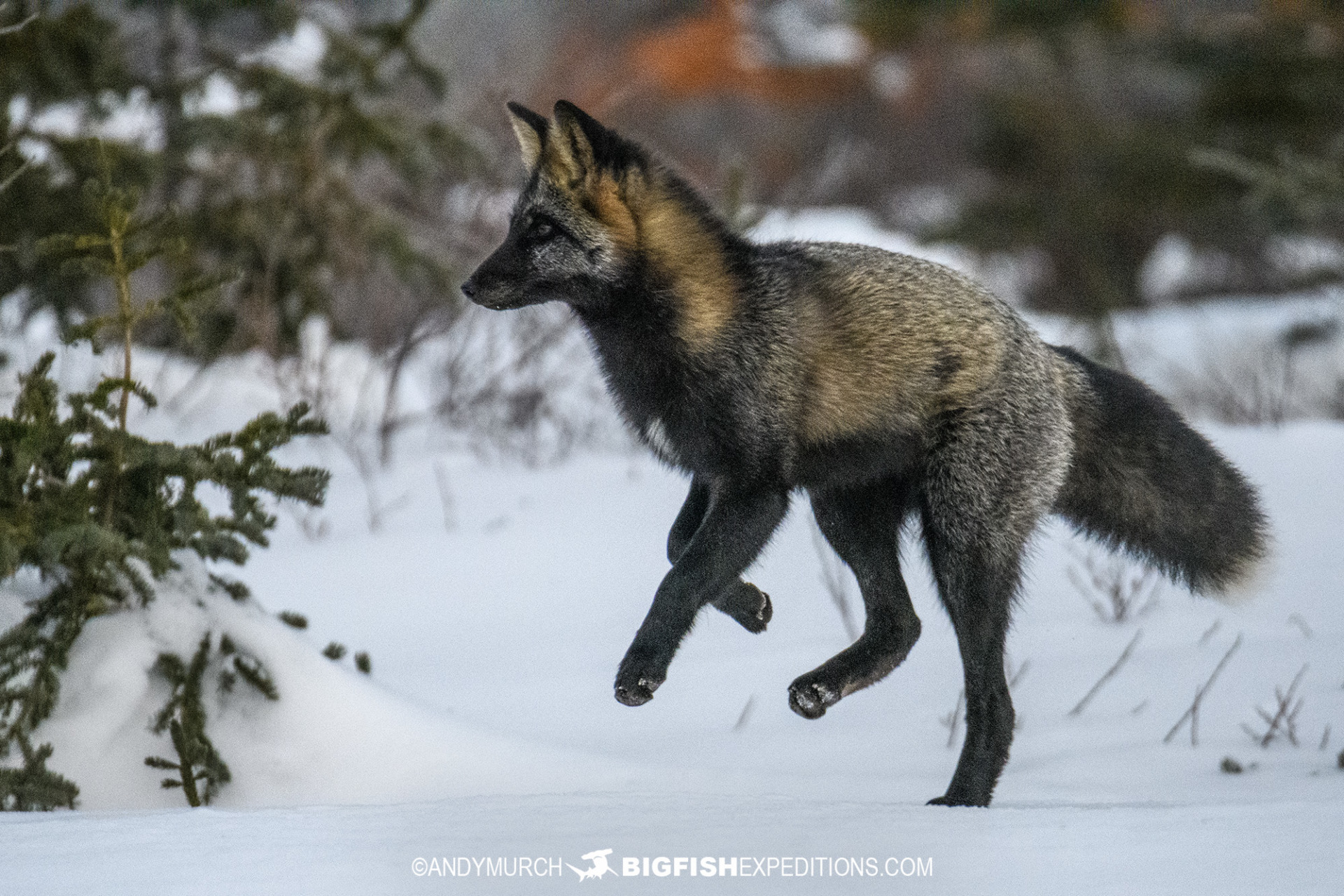 We found our final bear walking the shore, glancing periodically at the ocean and sniffing the air. The ice near shore was strong enough to support its weight but it would be a few more days before he could turn north and head out to sea to hunt seals. 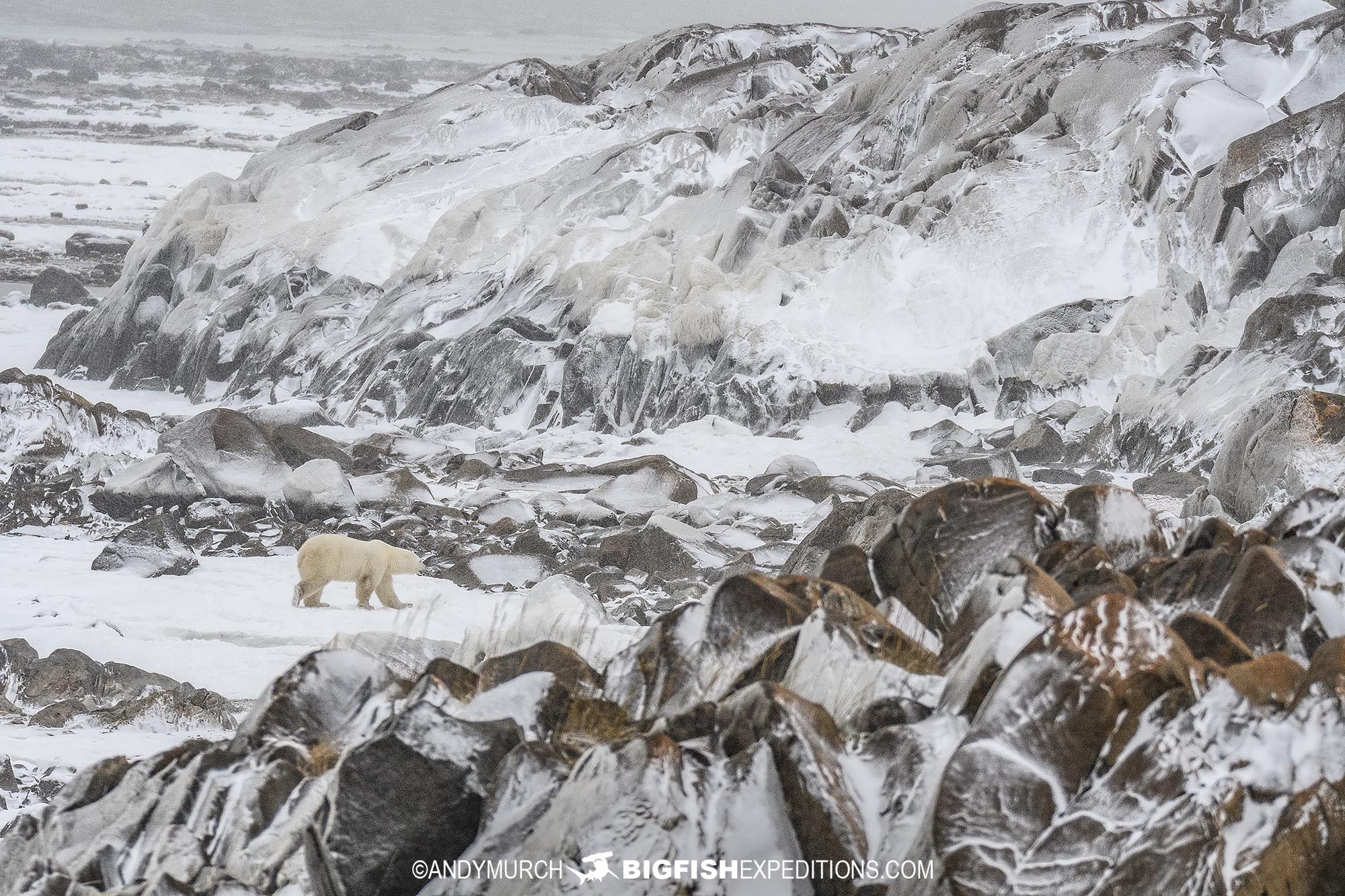 It had been another great Polar Bear trip, especially memorable because of our ultra-close wolf encounter, but great for polar bears and foxes too.

Next year we will return to enjoy another great Canadian Polar Bear Migration. If you would like to join us, please email me for more information. VIP Polar Bear Photo Tour 2023 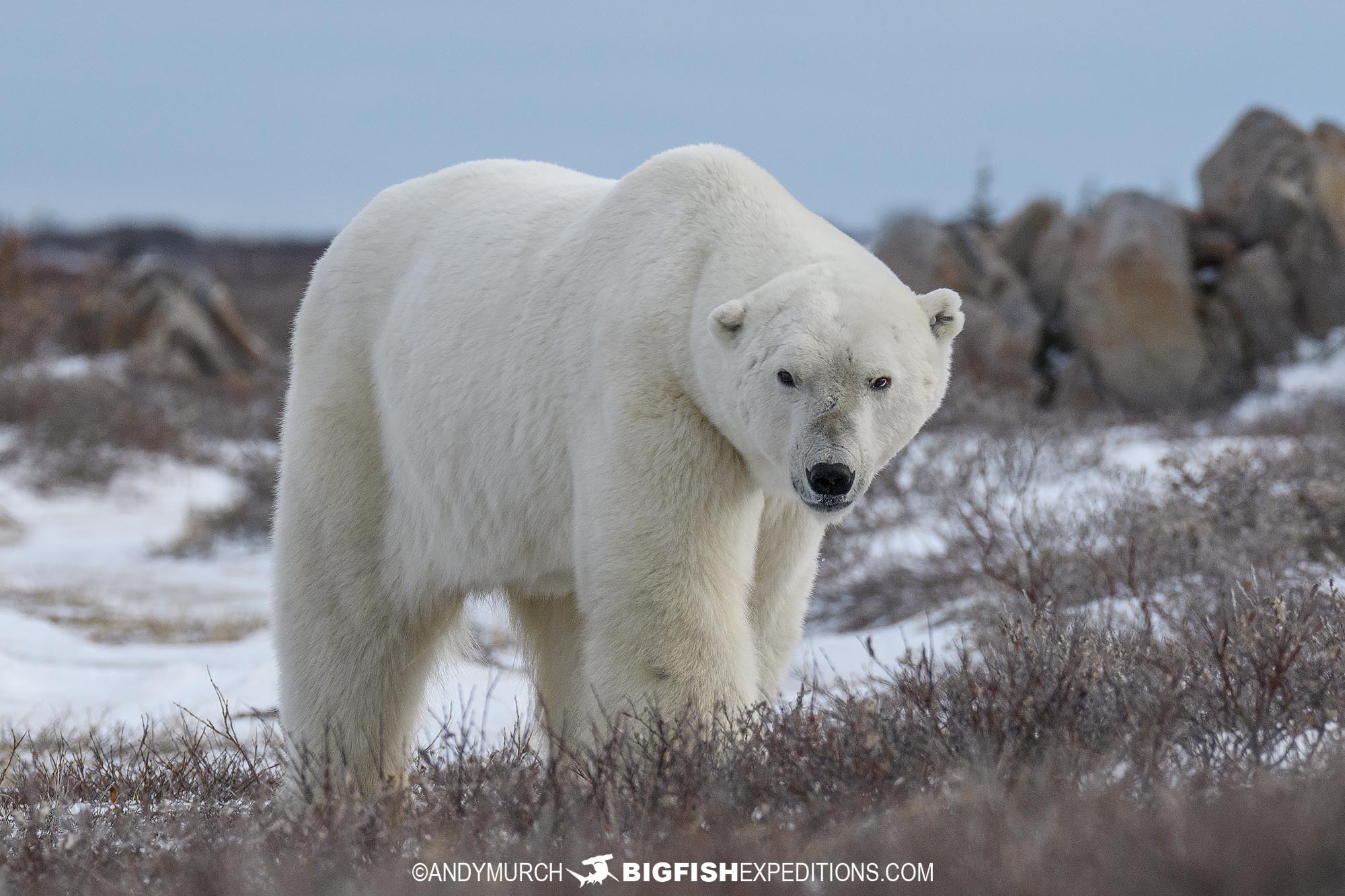 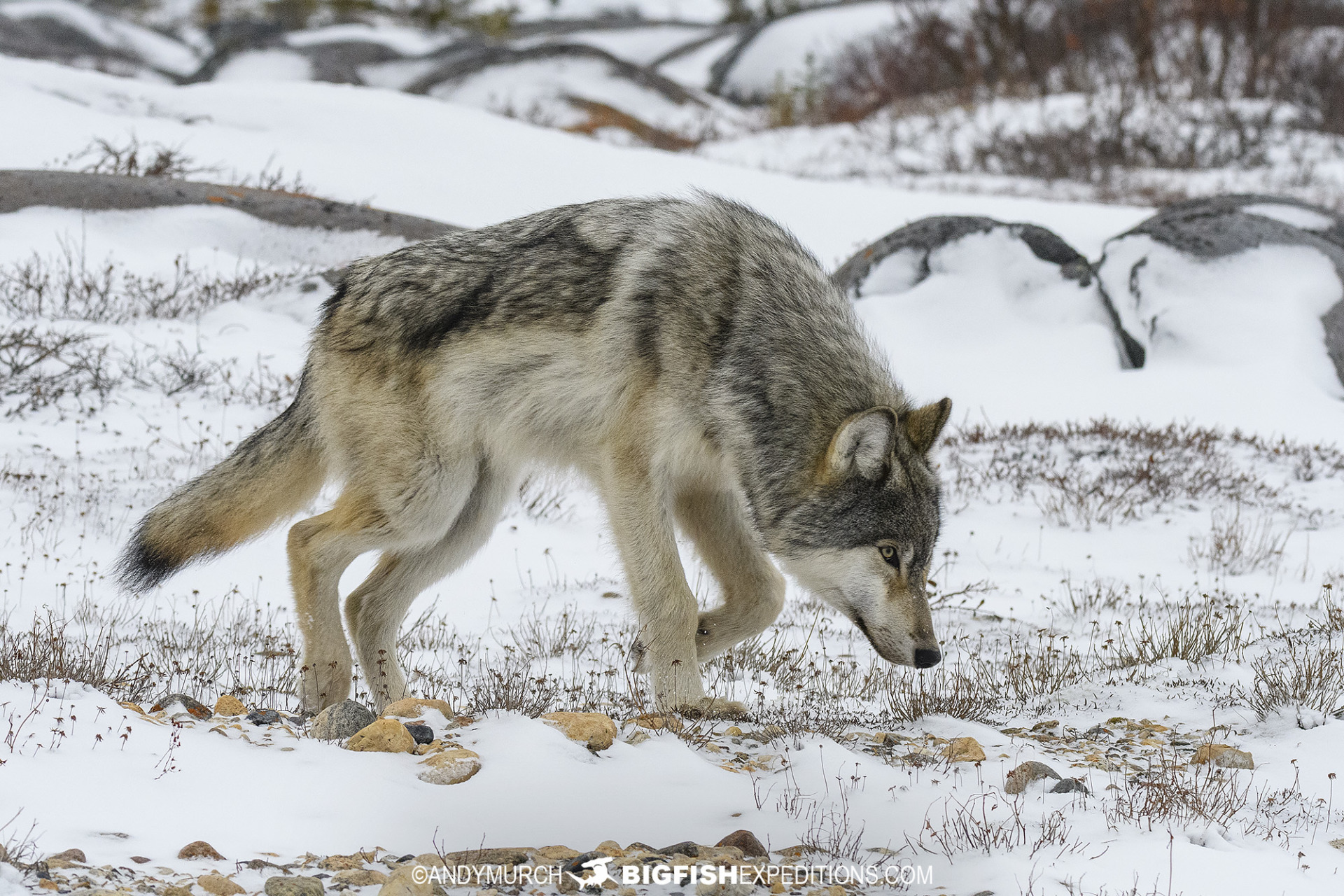